Tennessee’s governor said he will sign the bill into law once it reaches his desk. 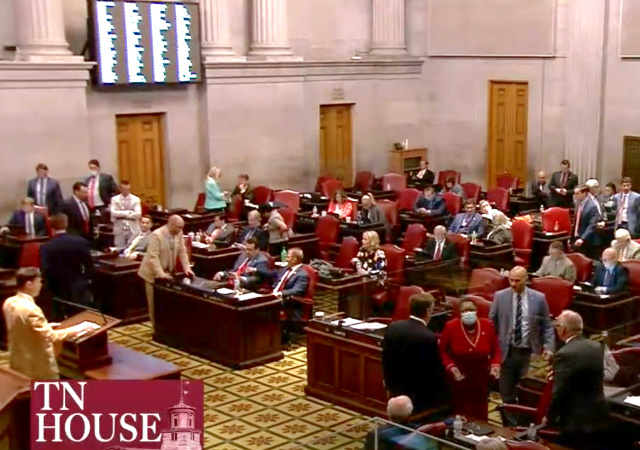 Gov. Bill Lee already made it known he will sign the bill when it hits his desk.

Tennessee’s House and Senate had two different bills. It went to a conference committee on Wednesday.

Since the House and Senate versions had differences, the legislation went to a conference committee Wednesday. That’s where Sen. Brian Kelsey, R-Germantown, proposed multiple additions, including forbidding teaching students that “the rule of law does not exist, but instead is a series of power relationships and struggles among racial or other groups.”

Republican Sen. Page Walley voted against the bill. He mentioned “the large number of African American people in his district and the need to ensure everyone’s stories are told.”

Except CRT isn’t about telling everyone’s stories. I’m all about teaching actual history. It ticks me off that the 1921 Tulsa Race Massacre isn’t well-known.

No, CRT is meant to teach white students that they are racist because of their skin colors. No matter what they do they are racist and responsible for all white people who came before them. It’s disgusting.

The Tennessean reported the assembly “cited an anecdote involving an anonymous 7-year-old whose mother said the child came home from school asking if she was a racist.”

The Tenessee Department of Education has not received any complaints about CRT. It also does not know of any school that teaches or sneaks CRT into the curriculum.

Tennessee is now not that far behind Idaho. It joins other states, too.

Oklahoma’s House of Representatives advanced its bill to ban CRT in public schools, including colleges and universities, to Gov. Kevin Stitt.

The House bill bans “teachers from teaching ‘anti-racist’ material, and from receiving private funding or material for teaching the controversial 1619 Project.”

“To prepare the next generation, Texas public schools should inspire a love of learning, foster students’ natural curiosity and provide a strong foundation to understand history from a balanced approach and navigate current events, not require educators push a political agenda,” Texas state Sen. Brandon Creighton (R), the chief sponsor of his state’s measure, said in an email.

His bill, he said, “will hold the line in Texas to ensure civics courses teach traditional history, focusing on the ideas that make our country great and the story of how our country has risen to meet those ideals, not that any race is inherently superior or place political requirements on students.”

Arizona’s State House passed its bill to ban CRT. The bill contains the same sentiments as those in Idaho, Tennessee, Texas, and Oklahoma. But this one still needs to get approval from the Senate.

DC is lost, in so many ways. It helps a little to see the states stepping up.

I’m glad people are finally waking up to how destructive and divisive this garbage is.

ALL SCHOOLS SHOULD BAN DIVISIVE INDOCTRINATION

CRT is rancid woke propaganda intended to divide America and undermine our society. The nasty people pushing this crap should never be let anywhere near kids.

The real issue I want answered is how CRT came about in the first place and why so many demand it to be taught? Like the 1619 Project, these ideological programs are filled with errors that do nothing more that coat Marxist socialist lunacy with a coat of racism before selling it to unsuspecting students.

Even more curious is how teaching this material is sacred to so many on the Left despite how insulting and unsettling it is to legions of students and their parents, but no criticism of the program is to be allowed and yet others who say merely one specific word, no matter the context, are doxxed, fired, and otherwise destroyed because it made some snowflake student uncomfortable.

Our country was not built with one way streets when it comes to our rights and values.

CRT, which is basically Marxism dressed up in racial terms, has been in universities for decades. When I was in school back in the 90’s, there were numerous academic articles being published in legal journals about how the U.S. prison system had been deliberately designed by whites to replace the plantation system of the south. In other words, prisons (and the U.S. justice system in general) were being used by raaaaacist whites as a way to control and oppress blacks.

As for the 1619 Project, that is a more recent fabrication, and even black historians (real ones with legitimate credentials, not Hannah-Jones type frauds) have pointed out that the central thesis — that the U.S. was founded for the specific purpose of perpetuating slavery — is not true, and is contradicted by the historical record.

This is good news, but it seems likely this is just going to end up being a game of Whack-A-Mole as teachers just switch to a different Trojan Horse to inflict Marxism on their captive students.

The long-term solution is to put education back in the hands of the parents rather than political animals – decertify public teachers unions and legislate school choice/vouchers to break the back of the public education beast.

Sigh. It seems like the War on Christmas starts earlier and earlier every year.

Mary Chastain: No, CRT is meant to teach white students that they are racist because of their skin colors. No matter what they do they are racist and responsible for all white people who came before them. It’s disgusting.

That’s contrary to most Critical Race Theory, which posits that racial disparities are often structural, and not dependent on individual racist views.

It teaches both that all whites are racists and that Americas structures made by and for whites keeps minorities down.

Danny: It teaches both that all whites are racists and that Americas structures made by and for whites keeps minorities down.

Critical race theory isn’t a single entity, but a number of related concepts and positions. In any case, you might want to provide a specific citation for discussion.

Sorry, nonsense and pablum. BS, in other words.

You are skilled in spreading nonsense, I see. Racial disparities are “structural”? What the hell does that even mean? It’s pure nonsense. Everything is “structural” and nothing is “structural”. It’s a series of words without meaning. The only purpose of CRT is to avoid any serious analysis of why blacks perform at lower levels in some cases. It’s only purpose is to put up such a wall of BS that no one will be allowed to think.

We provided a specific, and requested you do the same. Consider a segregated society. Legal segregation ends, and they decide to go with a “race neutral” method of hiring, the old-boy network, which leads to continued racial disparities. That’s structural.

So, old textbooks used anecdotes that a black supremacist (and wypipologist?) find objectionable? That must mean we need to lie to children about their past and cast everything as a racial power struggle even when it makes more sense to interpret history using a more nuanced lens.

The 1619 project is undeniably based on lies and intentional misrepresentations. Why do you think it is okay to knowingly teach lies and purposefully misrepresent both events and motivations?

I don’t know a single person who has problems with a less “whitewashed” history that acknowledges our country has done some immoral stuff. Nobody I know is going “Yeah, those Injuns really deserved our treaty violations so we shouldn’t even teach them to the youngins!” Everybody should have a problem with intentionally lying to children. We should all have a problem with making any kid feel “less than” for the circumstances of their birth.

I don’t see how anybody can deny that ANY of the CRT branches aren’t reliant on the assumption that conflict is innately about one racial group trying to maintain supremacy over another. To cast one group, always, as the “oppressor” and another as the “oppressed” does a disservice to all people and is both a stupid and lazy way to look at history or any conflict.

Did you know that only a very small percentage of high school seniors can correctly identify slavery as the primary cause of the Civil War?

Dathurtz: The 1619 project is undeniably based on lies and intentional misrepresentations.

It’s “undeniable” that slavery and race are a central issue of American history. Most of the 1619 project is well-researched, though a few things were overstated.

Dathurtz: I don’t see how anybody can deny that ANY of the CRT branches aren’t reliant on the assumption that conflict is innately about one racial group trying to maintain supremacy over another.

Turns out that much of American history is about “one racial group trying to maintain supremacy over another.”

Obviously, you are severely off base. The 1619 project is totally based on Marxism. It is merely a recitation of a sick, twisted Marxist interpretation of history, where NO THOUGHT AT ALL is allowed. You are taught to hate others because of their race. You are taught that history IS ONLY ABOUT which race is oppressing another. You are very seriously misled.

fredx3: Obviously, you are severely off base.

Your comment lacks all specifics. To reiterate, turns out that much of American history is about “one racial group trying to maintain supremacy over another.”

Unless you are just trolling, then you seem to have a stupid and lazy way of looking at history.

The many Zachs are trolls who pop at LI from time to time (during the school year); I’ve long-suspected it’s some high school, maybe remedial college, class project since the many Zachs speak as “we” and often have different styles of presenting their trollery, all at a sophomoric level. LI readers tend to ignore them these days unless they feel particularly inspired (or are just bored).

Dathurtz: … stupid and lazy way of looking at history.

The only thing that will save us is to allow parents to decide what school their kids go to. No more of this enforced governmental subjugation of local populations, forcing them to go to terrible, screwed up schools, just because the government says so. ALL parents should be able to review all schools and select the one that performs. This is especially important to black kids, who are now forced to go to schools that are all screwed up and full of criminal minds who do not want to learn.
Put the money in the hands of the parents to spend. Not in the hands of sick, twisted, Marxist administrators.