The union endorsed Biden: “The tariffs have been a success, allowing our industry to restart idled mills, rehire laid-off workers and invest in the future” 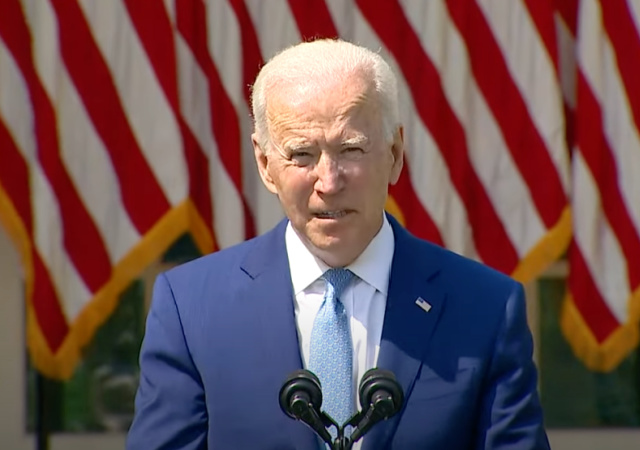 Trump was an outstanding president for labor, a fact for which he receives little credit. Many labor union members backed Trump, but the bosses are in bed with the Democrats and backed Biden.

Now the Steelworkers Union is asking Biden to keep Trump’s tariff on foreign steel in place.

Labor Union’s Endorsement for Biden Comes Back to Bite Them

I have no sympathy. You voted for this, guys. This is the country you wanted. You wanted Joe Biden to overhaul the economic agenda. No more mean tweets, but now there’s rising inflation, anemic jobs growth, a border crisis, and a war brewing in the Middle East. Russia has become aggressive again, and China is getting more handsy with Taiwan. But there are no more mean tweets. For those in the steel industry, they’re pleading with Biden to keep the tariffs established under Donald Trump intact…

Vespa points to this article at The Hill by Niv Elis:

“The tariffs were necessitated by repeated surges in steel imports driven by global steel overcapacity that threatened our industry and the nearly two million jobs it supports,” the groups, which include the United Steelworkers, Steel Manufacturing Association and American Iron and Steel Institute, among others, wrote in a joint letter to Biden.

“The tariffs have been a success, allowing our industry to restart idled mills, rehire laid-off workers and invest in the future,” they added.

Trump imposed tariffs of 25 percent on steel and 10 percent on aluminum in 2018 as part of his aggressive trade agenda, setting off a trade war with many close U.S. allies, who imposed their own counter-tariffs on U.S. goods.

One has to wonder how the Keystone XL Pipeline workers feel about this. If we had honest media, someone might ask them for comment.

Does everyone remember back in October of 2020, when the Steelworkers Union projected a Biden-Harris logo onto Trump Tower in Chicago?

Trump did more for labor and American workers in four years than Democrats have done in decades. Protecting the interests of American workers was one of the central tenets of his entire presidency.

The fact that these union folks desperately want to keep his policies in place is an admission of that, but it’s too little, too late. They can endure the fruits of the Biden administration along with the rest of us.

Consequences. May their rank and file abandon the union in droves.

Without Jobs, there is no Union.

With democrats running things we will soon have a Union of Socialist Republics.

Without dues paying members there aren’t any Union.

Yup: stolen elections sure do have them… so does being stupid. the union bosses are just now finding that out.

Chuck Schumer wishes to thank you from the bottom of his heart for promoting the idea that Republicans should stay home in 2022 and 2024, while Biden and Pelosi also greatly appreciate your work on behalf of leftism.

Unlike you, Schumer and Pelosi already understand that they can get exactly the same election results regardless of how many Republicans do or don’t show up from now on.
As for Biden, he understands that it’s Pudding Day only when the pudding actually shows up.

The Biden-Harris Crime Syndicate will be too busy counting Chinese money to listen.

Democrats. Spit! I think the majority of America has had it up to here. When does their civil war turn hot? I’ve a score to settle…..

I am too old to fight, but I am a decent teacher of chemistry and oxidizers.

Lie down with dogs, wake up with fleas.

Lie down with Democrats, wake up with no America.

He won’t keep them in place and they will just accept it and vote for him or whoever has a D after their name as their lives go to crap…..”please sir can I have another”….

I would submit that these average union members who haven’t already switched to the tea party/ MAGA economic populism of the r party will be doing so.

The glaring differences between the two political parties is becoming irresistibly visible. This is true at Federal, State and local levels alike. The d/progressive are pushing an agenda far out of the mainstream of our center/right electorate.

you might have a point, in a nation of laws, but the US isn’t one of those any longer. Dominion will ensure their votes go the the pre-selected winning Demonrat, not some icky Trump type.

So are saying that we shouldn’t vote anymore? If so then why bother expressing an opinion one way or the other on political issues?

Either opinions still matter because they can shape and inform the electorate which then casts an informed ballot that actually expresses and records their decision or none of it matters.

If you want to roll over or bend over for the d/progressive by giving up and encouraging others to quit well….ok.

The reason why it’s ok is that this is still, for the moment, a free Nation. If you truly believed the defeatist line you insist upon taking ..you wouldn’t be making comments that cast a bad light on the tyrannical overlords you claim have taken over.

Heck aren’t you worried some unknown agency is monitoring your sedition, waiting to seize you in the night like a bad movie version of the Stasi?

I don’t think you are because you don’t really believe the defeatist BS you are trying to sell.

Broadcasting your ‘contingency plans’ in the face of what is described as irredeemably lost liberty, where the entire apparatus of the Federal government is supposedly ‘out to get’ the ‘true patriots’ who dare acknowledge the liberty ever existed seems…..unwise.

At best it is illogical.. At worst your lack of OPSEC endangers you and your family.

I maintain that if y’all really believed the Stasi was out there and coming for you then folks spouting defeatist BS wouldn’t stick their head up for fear of appearing like a nail to the waiting hammer of the tyrannical regime that some folks refuse to shut up about.

Como, you turned a perfectually reasonable contigency plan of reelecting Trump into something else.

Umm if your original statement is:
A. Vote
While making
B. Contingency plans

Then the contingency plan is a alternative, fallback plan to failure at the ballot box. That’s how the message was communicated.

For the record, IMO we have 2 or 3 presidential election cycles left to enact lasting reforms at the Federal level, primarily within the permanent bureaucracy as well as continuing to bring more balance to the Judiciary before the opportunity will slip away.

If we haven’t done so in a decade, I will be proudly wearing a tinfoil hat right next to some of the more outlandish theorists.

Zero evidence for Dominion doing anything, massive evidence against it; but keep up the trolling, keep telling Republicans not to vote Chuck Schumer loves you for it.

I wonder if union leadership is cut from Biden family cloth?

Well from the perspective of the grift on a gravy train, absolutely.

Some polling company should ask every union worker in all unions “who did you vote for?” You get what you vote for.

The motto for Fraudy Six’s administration should be:
BOHICA
(Bend Over, Here It Comes Again).

In other news, Steelworkers’ management opens negotiations with Dominion systems prior to upcoming Union elections.

It is only going to get worse for the steel industry in the U.S.

Out of control energy costs are going to send this energy intensive product prices through the roof much like wood for construction. Add to that inflation, transportation and employee wage demands and even tariffs won’t protect the industry.

It reminds me of the frat boy in Animal House bending over and saying, “Thank you sir may I have another” as he is getting paddled repeatedly.

My neighbor is an official with the USW – he is 100% for Biden no matter what Clueless Joe does to hurt the steelworkers. This same neighbor was calling other people “anti-American” for flying Trump flags in their yards.

It seems being a democrat is a disease. Once you catch it is hard to recover. Most of those who are able have already switched. For the rest there is no hope.

Similar to some STDs, very hard to cure.

And similar to the Big One, fatally attacks the brain.

People should be planting Trump in their yards, maybe they will turn on each other.

Tariffs are the equalizers of labor and environmental arbitrage and restore market function to optimize price determination and organic regulation of supply/demand.

When a union is begging they have no leverage and there is an opportunity to reel in their BS…cut them off every chance you get.

I hope Biden ends the tariff and doesn’t get media cover if he extends it (but we all know he will).

C’mon SlowJoe, be a man. Cancel the tariffs on steel. You know you want to. You have a MANDATE!!!! You got 81 million votes. More than any other presidential candidate in history. More than Barack Obama! More than George Washington!

You have the POWER, man! Use it.

And for you union members who voted for Biden. More than a thousand of you idiots lost your jobs with the closure of the Keystone Pipeline. Just like that (snap of the fingers). With a phone and a pen! BOOM – unemployed!

I hope you steelworkers lose your jobs, your homes, your cars. Divorce be upon you! Liberal women only want men who can provide for them, they don’t want unemployed losers in their bed.

Next to go are coal miners.

Auto workers… your jobs are being outsourced to Mexicans.

Learn to code…or write hack pieces for the newspapers.

Maybe you should have thought about that BEFORE you voted for the goddamn communist pedophile.