“You have to send people to D.C. that are willing to tell the truth and fight for our freedom regardless what have it costs you personally, economically, or socially.” 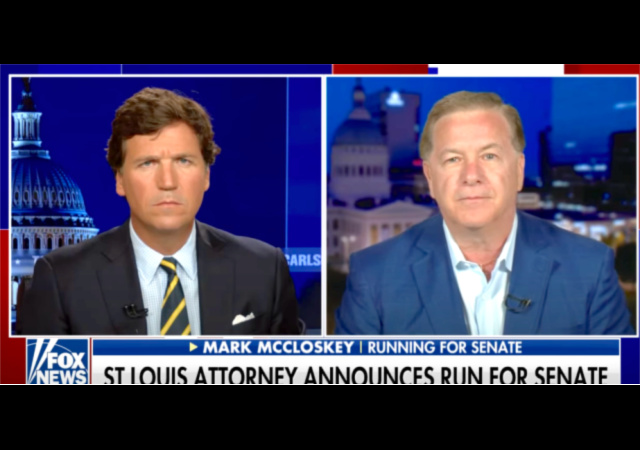 St. Louis attorney Mark McClosky made headlines in October when he defended his property with a gun after BLM protesters entered their gated neighborhood.

McClosky started a Senate campaign even though a grand jury indicted him and his wife Patricia on unlawful use of a weapon and tampering with evidence charges last October.

They should stand trial in November.

“Never Back Down. Our Nation is under attack – Big Tech, Big Business, the swamp in D.C., are all working together to destroy our God-given freedom, our culture, and our heritage” the ad begins. ” When was the last time a politician defended you? Defended America? Stood between you and the mob? We need defenders in America. But all we get are dividers. They want us to hate each other. Left vs. Right. Black vs. White. Rich vs. Poor. This is a tactic to destroy us. We are all AMERICANS. We are MISSOURIANS. Our nation, our state, our home is worth defending. Our freedoms are worth protecting. I can promise you one thing. When the mob comes to destroy our home, our state, our nation – I will defend it. I will Never Back Down.”

An angry mob marched to destroy my home and kill my family, I took a stand to defend them.

I am a proven fighter against the mob

When the mob comes to destroy our home, our state, our nation— I’ll defend it

I will NEVER BACK DOWN

“God came knocking on my door disguised as an angry mob. It really did wake me up,” he said.

“As I campaigned for [Donald Trump], and we’ve continued to do rallies and events supporting our constitutional rights, what I’ve learned is that the people are sick and tired of cancel culture – and the poison of critical race theory and the big lie of systemic racism.”

“People are sick of it, they don’t want any more posers or egotists going to D.C. All we hear is talk. Nothing ever changes,” he said.

“It seemed to me that people have to stand up. Each and every one of us needs to stands up and say we are not sheep, we are a free people.”

“You have to send people to D.C. that are willing to tell the truth and fight for our freedom regardless what have it costs you personally, economically, or socially,” he added.

“If we don’t stand up now and take this country back, it’s going away. We used to talk about the erosion of our civil liberties… [S]ince [the Biden] administration took over there has been the wholesale slaughter of our civil liberties and institution of what can’t be called anything but socialism.”

We need almost every politician currently in power to be replaced with this type of person. It took a cowardly attack on his personal freedom for him to realize that he needed to stand up in earnest, but he certainly has the right attitude now. Hopefully we won’t all have to been *awakened* as he was but if the current atmosphere continues to exist, we will all be tested.

The quote attributed to Admiral Yamamoto after the Pearl Harbor attack “I fear all we have done is awaken a sleeping giant and fill him with terrible resolve.” comes to mind.

Thus the rapid elimination of the middle class and freedoms by the Democrats. They cannot allow counterrevolutionaries such as McCloskey to interfere with “progress” toward Marxist slavery for the masses.

We had a revolution against tyranny in the 1770’s. We won. We established liberty.

The Marxists are the counter revolutionaries. They are at war with America (they see it as evil). Their America was born in 1619 – not 1776. They win only by convincing people to hate America. They hate the Constitution. Hence they want justices that are allowed to “interpret” the Constitution rather an apply it as written.

Furthermore – the counter-revolutionaries seek to impose a new form of tyranny. Patriots already defeated tyranny in the 1770s. We will not allow counter-revolutionaries to reimpose it. Found fathers knew tyranny comes in many forms. That’s why they established the 2A. “A well-regulated militia being necessary to the security of a free state…”

“I would sooner be governed by the first two thousand names in the Boston telephone directory than by the two thousand members of the faculty of Harvard.”

Substitute the current list of politicians for the faculty of Harvard and you’ll reach the same conclusion.

What has really changed from when Buckley issued those now famous words is corporate America which routinely demonstrates it’s just as bad as either DC or academia. I would sooner be governed by the first two thousand names in Miami’s telephone directory than two thousand US corporate board members.

I really like Mark McClosky’s style. His turning lemons into lemonaid, launching a political campaign.

Those jackasses who charge Mark McClosky and his wife made this possible. Unintended consequences.

The Marxists/Democrats must now destroy McCloskey as he did not submit.

You left out Republicans. McCloskey is a MAGA candidate. It’s the Republican establishment that will lead the way in destroying him. That’s the way it works. Nip threats in the bud and if that doesn’t work, circle the wagons around the Dems just before they are about to be defeated.

It appears that Google does not seem to think his fundraising site is worthy of a search hit. I am not surprised I guess.

He has my vote.

He will get $100 towards his campaign from me. More if I can,

I think we have the new “me too” movement. Right here.

this guy and his wife have balls

The wife is a tranny?

No but she does have a nice rear end

The best defense is a strong offense. Running for office will shine a light on persecution of both Mark McClosky and his wife.

Nothing against him and he seems like a courageous and articulate guy. Just wondering about Herschel Walker, who some speculated would run and who, apart from being a another stand up guy with solid values, also has that certain something — I can’t put my finger on it — that makes him bullet proof. Also, if it’s McCloskey, envision the Dem ads with the photo of a short guy in a pink shirt in front of a mansion.

Envision all you want. He’s not backing down from potential attacks of any sort.

That is stand-up to not allow leftist fear tactics to diminish his resolve.

If only more would be less concerned about how things will play in Peoria or social media.

I like him. He’s got all the leftists in a tizzy. They don’t know if they’re coming or going. When I see one I don’t know where to say hello or good bye. So I just say aloha.

And go eat a taco.

Hard pass on this guy. IMO he is declaring candidacy in order to fund raise and muddy the waters regarding his actions. How long has this guy been a r? When was his last political contribution to d/progressive? Not that my opinion matters as I don’t live in Missouri.

I absolutely support he and his wife moving outside and stationing themselves between the mob and the home they spent decades restoring. Their muzzle discipline is another subject. Say what you want about the kid Rittenhouse, he at least had a damn sling allowing him to carry at ready position.

Does it matter if he was a Democrat, our ranks are full of fed up former Democrats. To grow, we need to draw dissatisfied voters

IMO, he is on the grift. The r party has plenty of grifters already. His prior political affiliation is just icing on the cake.

As I said I don’t have a vote in Missouri. I do have a choice with my campaign contributions, and choose not to support this guy. Surely Missouri r party has better alternatives.