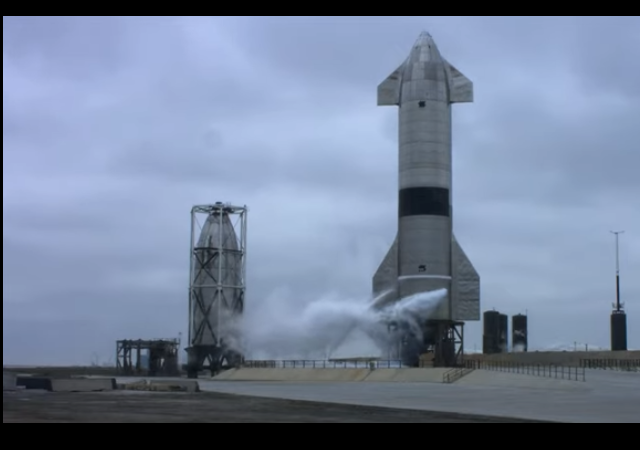 There has been much good news recently related to the American space program. First, I reviewed the successful tests run on Mars by the Perseverance rover’s Ingenuity helicopter and oxygen-generation unit (MOXIE).

Elon Musk’s SpaceX launched and then landed the latest prototype of its Starship rocket on Wednesday, in the fifth high-altitude test flight of the system.

“Starship landing nominal!” Musk tweeted after the landing. Nominal is a space industry term used to refer to when things go according to plan.

SN15 marked the first Starship prototype that was not destroyed after a high-altitude test flight. While a small fire broke out at the base of the rocket after the landing, the blaze appeared contained a few minutes later.

The vehicle is a prototype for the spacecraft that is being designed for potential human-crewed missions to Mars. SpaceX launched SN15 around 6:15 pm ET from its testing facility in Boca Chica, Texas.

SN15 ignited its three massive Raptor Engines that released out streams of white smoke from the base before fire blew out to shoot the rocket into the air.

The prototype climbed through the sky until it reached six miles, where it hovered for a moment and then it perform the infamous sideways flip, dubbed a ‘belly flop’ maneuver by CEO Elon Musk.

After hitting the six-mile mark, the rocket hovered in place for a few seconds using just a single rocket and then performed a controlled aerodynamic descent.

This mimics the technique Starship will use when returning through Earth’s atmosphere from space – presenting the ‘belly’ as it enters the atmosphere reduces the speed of descent as it approaches the ground.

SN15’s Raptor engines reignited as the vehicle attempted a landing flip maneuver immediately before touching down on the landing pad adjacent to the launch mount, it shut down the Raptor Engines and stood tall on the pad.

Musk indicated that the SN15 prototype included “hundreds of design improvements” in structures, engines, avionics, and software that contributed to the successful test.

SpaceX said in a statement Wednesday that the upgrades “will allow more speed and efficiency throughout production and flight.” The changes include “a new enhanced avionics suite, updated propellant architecture in the aft skirt, and a new Raptor engine design and configuration,” SpaceX said.

SpaceX is developing the Starship spacecraft and its huge booster rocket, named the Super Heavy, as a fully reusable launch and space transportation system capable of ferrying more than 100 metric tons of cargo into low Earth orbit, more than any other rocket in the world.

With in-space refueling, the Starship could eventually carry people and heavy supply loads to the Moon and Mars.

Now to get humans ready for such a mission, which may be a more complicated matter.

Astronauts’ faecal matter has revealed startling changes to how the human body is affected in isolation, such as during a crewed mission to Mars.

The Mars500 experiment put crew members from Russia, Europe, and China in a completely sealed habitat between June 2010 and November 2011. Researchers have looked again at the data from that work – and discovered new information that could help future trips.

The aim of this was to test the physiological and psychological effects on human health, with all six participants showing major changes in body mass, muscle strength, and gut microbiota.

One of these symptoms was major disruption to glucose metabolism, which is often seen after space flight. Glucose is a subcategory of carbohydrates, found in bread, fruits, vegetables, and dairy products, and is one of the body’s preferred source of fuel.

🚨THE STARSHIP HAS LANDED!

Mars is a little bit closer today, congratulation to SpaceX you are inspiring millions of people around the world.

Also did you catch that SN15 landed with 2 engines!? 🚀#SpaceX #SN15 @elonmusk pic.twitter.com/sdkZ0bg0eq

I go to Boca Chica a lot and have seen the launch pad and this rocket when it was being assembled. Haven’t seen a test there yet. It’s so bizarre, I still can’t fathom it sometimes.

You can watch a launch from Matamoras too.

No way this gringo is going into Matamoros these days. I’ll walk to the Mexican side at the mouth of the Rio Grande at Boca, I’ll cross at Boquillas, if you pay for it I’ll go to Puerto Vallarta. I’ve heard gunfire from Roma, I’m still gonna stay out of the big border towns for now.

In my mid 20’s I was very interested in if a flying saucer was practical. Of course, my grasp of the issues left much to be desired. I did recognise that stability would be a big problem. At that time mini computers were available. But they were not anywhere near fast enough to keep control of a saucer shape craft

The headline of this story bothers me: “SpaceX Starship SN15 Sticks the Landing After High-Altitude Test Flight.” Since when is the word “stick” a verb?

Not being snarky, but it has been a verb pretty much since English was invented. Inherited from Old German “stehhon”, to stab, pierce, etc.

4: to put or set in a specified place or position

No edit button. The verb “to stick” does not seem applicable here.

To “stick the landing” has been in common usage for a long time, normally to describe gymnasts and their dismounts… from bars, beam, horse, whatever.

In 25 years Musk did what NASA did in 9. Way to reinvent the wheel on the taxpayer dime.

Not a valid comparison. The shuttles were very expensive to operate and maintain. landings were also greatly resstricted.

And the boosters were not reusable.

The R&D cost to make the boosters reusable greatly exceeds any savings.

Formula One makes the same mistake. “We’re going to save everybody money by mandating that engines and transmissions last more than one race”. Now that they have to last 6 races each, it’s on the order of $30 million a year for an engine contract.

“The R&D cost to make the boosters reusable greatly exceeds any savings.”

Elon Musk is awesome. He’s got balls the size of Trump’s.

His new ship can carry 100 metric tons of cargo into low Earth orbit, more than any other rocket in the world. Does everyone realize what this means?? – Stacey Adams can become an astronaut!

musk is a fruitcake. i wouldn’t trust him to babysit my goldfish!
they can’t even get the video feed to work. this should be a no brainer.
it’s the easiest part, that’s been around the longest. if it fails, why would anyone risk their life that everything will work correctly?