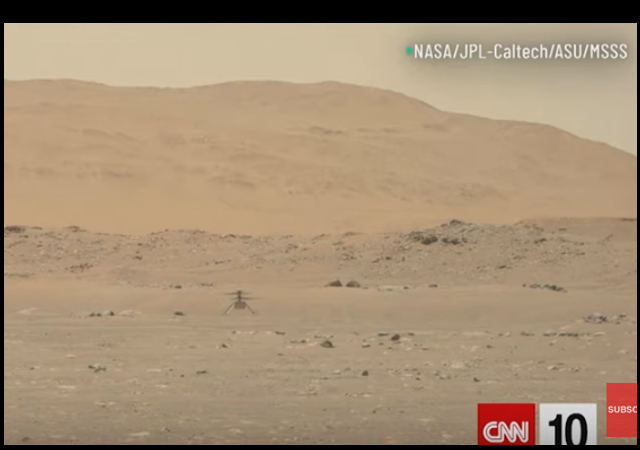 During my recent vacation, both projects had very successful tests. To begin with, Ingenuity has already flown several successful missions on the Red Planet.

NASA’s “high-risk, high-reward” Ingenuity helicopter is pouring on the rewards. It completed its fourth and most ambitious test flight across Mars on Friday. “Success,” NASA JPL tweeted, saying Ingenuity went father and faster than ever before.

…NASA said the plucky chopper already “has met or surpassed all of its technical objectives.” That gave the helicopter team license to try the more daring fourth flight to push its capabilities in the thin atmosphere of Mars.

Officials from the National Aeronautics and Space Administration (NASA) indicated that the tests worked so well, the scientists would now be moving from a demonstration to an operational phase.

This means the chopper will support Nasa’s Perseverance Rover, helping with its hunt for signs of life.

The new phase will last for another 30 Martian days – or Sols – but the team said it was hopeful the operational role could be extended further.

“The technical performance has been fantastic and it is exceeding all our expectations,” said MiMi Aung, Ingenuity’s project manager.

“I can’t tell you how excited we are about this new phase.”

The #MarsHelicopter will soon embark on a new operations demonstration phase. It’ll shift its focus from proving flight is possible on Mars to demonstrating flight operations that future aerial craft could utilize. https://t.co/wH9OHZvIjv pic.twitter.com/Is50qZWhhk

“This is a critical first step at converting carbon dioxide to oxygen on Mars,” said Jim Reuter, associate administrator for NASA’s Space Technology Mission Directorate. “MOXIE has more work to do, but the results from this technology demonstration are full of promise as we move toward our goal of one day seeing humans on Mars.”

In its first test on the Red Planet, MOXIE produced about 5 grams of oxygen, the equivalent of 10 minutes’ worth of breathable oxygen for an astronaut. MOXIE can generate up to 10 grams of oxygen per hour. MOXIE is expected to extract oxygen at least nine more times over the course of a Martian year – nearly two years on Earth.

Aboard NASA’s Perseverance rover, MOXIE creates oxygen on Mars: Thanks to an MIT-designed instrument, a NASA mission has produced oxygen on another planet for the first time. https://t.co/TkxkeLpmiz pic.twitter.com/j5wOKjcN7S

Congratulations to NASA and the Jet Propulsion Laboratory for these significant achievements! The news is truly out-of-this-world and is a ray of sunshine in what has been a long cycle of dreadful news.

Shouldn’t Mars be a hellish hot hole with ALL that CO2? /sarc

The Horror, the Horror!

BUT WAIT! looking for life but there’s this: “Moxie is able to strip oxygen atoms from CO₂ molecules, which are made up of one carbon atom and two oxygen atoms. The waste product is carbon monoxide, which is vented to the Martian atmosphere”

In all seriousness, amazing tech accomplishments.

this is what can happen when you give the best of the best(in science, in engineering, in design, etc.)the tools and the resources to achieve and explore

they can advance mankind

Absolutely a ray of sunshine

In a time of political and cultural idiocy, it’s heartening to see that American still do amazing stuff.

MOXIE is particularly great — the demonstrator is already close to the point of being sustainable (make enough O2 to support one astronaut). One can upscale this and important see how reliable it is — what breaks and when. One could see a MOXIE on the backpack of every astronaut, and large units supporting the habitats. What a superb engineering accomplishment.

Already providing a practical application for Earth. We just build a lot of Moxies, convert atmospheric CO2 into O2 and CO, and voila, no more “climate change” to worry about. (Anybody see the flaw? Leftists likely won’t.)

Why did you bring politics into it, everyone was just fine marvelling at the ingenuity, intellect and engineering excellence on display.