On May 20, anti-Semitic attacks happened in the Diamond District, Times Square, and a restaurant. 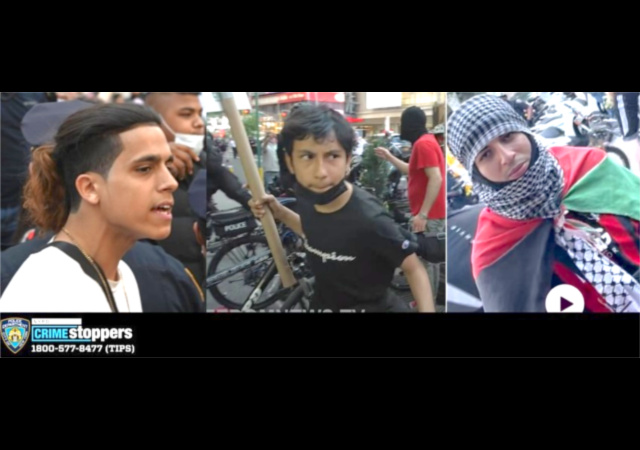 The NYPD released new photos of suspects wanted in the May 20th anti-Semitic attack in Manhattan.

New photos of three individuals wanted in connection to the anti-Semitic assault on May 20th at 1604 Broadway in Manhattan. Know them? Or do you have more or better pictures of them? DM us or call @NYPDTips 1-800-577-TIPS. https://t.co/uZAdTdmoUo pic.twitter.com/fn2WdoHxhJ

Anti-Semitic attacks happened in the Diamond District, Times Square, and a restaurant on May 20.

The police cleared an “unlawful assembly of free palestine [sic] agitators at a pro Israel demonstration in Times Square.”

Then the Free Palestine rioters broke through the barriers to taunt the pro-Israel demonstrators.

They proceeded to throw a firework at the Israel crowd. A brawl eventually broke out.

Faisal Elezzi and several others allegedly surrounded Joseph Borgen on Broadway on May 20, then punched, kicked and pepper sprayed him, police said. Borgen was also hit with crutches.

“I was holding my head bracing, trying to make it out alive,” Borgen, 29, said. “My whole face was on fire, more pain than anything else.”

Borgen thought he was going to die.

There are obviously “dark” white supremacists who forgot their MAGA hats.
Yeah, that’s the ticket.

They look like White Hispanics. However, under the tenets of Critical Racists’ Theory, they have the prerogative to identify as Beige Turks, but never babies, who are subject to anthropogenic selection under UN auspices.

Rolling Stone magazine will likely glamourize them with a cover page.

If the kid on the left only had bigger ears, he could play young You-Know-Who on the next buttkissing series undoubtedly in production at Netflix.

First thing I thought then I saw the picture was “Oh, bummer!” Quickly followed by “Why bother wasting oxygen, they’ll release them faster than grass through a goose.”

Other than black and brown, they’re all white… after reconstituting the colored bands of the Rainbow of inclusive exclusion. Therein lies the insidiousness of privilege hiding in plain sight.

So are these losers on the run now?

The insanity continues. The same people who condemned “all lives matter” as racist for failing to single out blacks are now all-lives-mattering antisemitism.