NYPD Arrests One In Connection With Antisemitic Assault, Seeks Assistance In Identifying Others

NYPD Arrests One In Connection With Antisemitic Assault, Seeks Assistance In Identifying Others 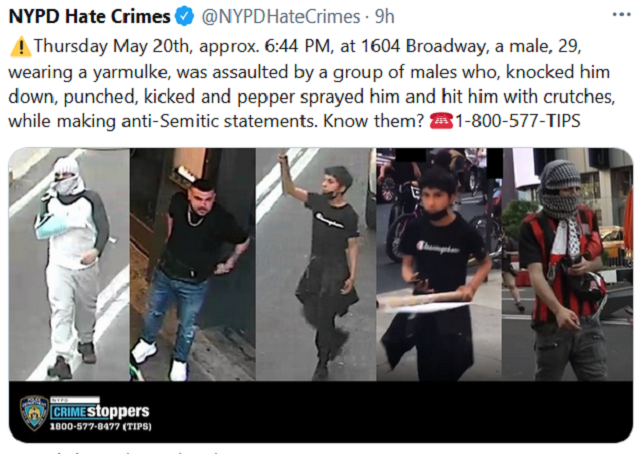 The recent spate of antisemitic attacks on Jews in (mostly) Democrat-run cities is horrifying.

Jewish people are being savagely beaten with objects, punched, kicked, and pepper-sprayed in broad daylight on the streets of our nation’s cities by roving gangs of anti-Israel thugs.

Jews are being savagely beaten in the United States by anti Semitic mobs who have been incited by left wing media and politicians who falsely accuse Israel of war crimes and apartheid. It is time for everyone of good faith to stand up against this vile and dangerous hatred.

The NYPD has arrested—and charged—one assailant and is issuing calls for public assistance in identifying more criminals who assaulted Jews on video.

⚠️Thursday May 20th, approx. 6:44 PM, at 1604 Broadway, a male, 29, wearing a yarmulke, was assaulted by a group of males who, knocked him down, punched, kicked and pepper sprayed him and hit him with crutches, while making anti-Semitic statements. Know them? ☎️1-800-577-TIPS pic.twitter.com/NDgmJ79MHt

UPDATE-23-year-old Waseem Awawdeh was arrested for using a crutch to assault a man in front of 1604 Broadway. He’s been charged with hate crime assault 2, gang assault 2, menacing, and criminal possession of a weapon.@NYPDDetectives @ADL_NYNJ @simonwiesenthal @JCRCNY @TheCSSorg

OMG, I am so glad I was not sipping my coffee as I read this! My keyboard would have been ruined for life. Too funny.

I thought his name was Wyatt Supra Macy!?!

We could have avoided so much of this had Hart-Celler never made it out of committee.

There’s a reason it didn’t. The swamp was busy, even back then:

They were arrested? Oooooooo, watch out for positional asphyxiation! Top priority!

good on nypd–of course, probably $500 bail(if any) and he disappears in nyc

So many young people have turned themselves into ignorant, selfish, mindless scum … sad state of affairs.

I hope he and the other perps get the book thrown at ’em.

He has been charged with various crimes. What are the odds that the DA’s office will not drop the charges? This is New York City.

They’ll plead it down to littering and time served.

Not scary anymore. Expected. The rule of law, and the concept of government legitimacy is gone and we are in Thomas Hobbes’ territory.

More like Hitler’s. We’re living a repeat of the Weimar Republic: Biden is Paul von Bismark. Wait till a lump of nothing named Kamala Harris becomes ‘president’: she owes everything, and all to the wrong people.

No, they won’t drop the charges. This is NYC; there are too many Jews, especially ones who still vote Democrat, for them to get away with dropping the charges.

I had a conversation today with a friend who is a dyed-in-the-wool leftist, a long-time Democrat activist, and he reported on the stressful month he’s had battling antisemitism within his own organizations, some of which he’s been a board member of for decades. He supports Scott Stringer, a “progressive” candidate for mayor who has recently been the target of a #metoo accusation; he reports that people have told him outright that they won’t support Stringer because he’s straight, male, and Jewish.

The Jews of NY in practice have no political power, or well other power either.

Even if every Jew suddenly became a partisan Republican it wouldn’t change New York from blue to red.

The fact that most are loyal Demcorats regardless furthermore tells Democrats “no need to compromise or consider their opinions”.

You are right they won’t drop the charges but it has nothing to do with Jewish influence which I think is zero.

You are openly talking about Democrats saying they “won’t support Stringer because he’s straight, male, and Jewish.” that doesn’t sound like very much influence to me.

No, there are enough Jews here that losing them would seriously hurt the Dems. The point of my anecdote is that this is finally frightening even the committed Dems among them. There’s no way my friend would vote Republican, except… what he’s seen over the last year is having an effect on him. And there are many like him. And it’s not just votes but also money and activism. How soon before Jews like him say “I didn’t give the party my heart and soul so it can tell me a Jewish man can’t be mayor” and find some other cause to support?

Look at the despicable Muslim supremacist-bigots and useful-idiot sympathizers in the vile Dhimmi-crat Party — ugly Rashida Tlaib, Ilhan Omar, Occasional-Cortex and their vile ilk — brazenly issuing with a straight face utterly insincere, hollow and hypocritical condemnations of these anti-Jew pogroms in L.A., NYC and elsewhere, after having spent their entire political careers gleefully vilifying Israeli Jews and American Jews who support Israel, while slinging the most despicable, false and contrived slanders casting Israel as an allegedly “racist,” “colonial,” “apartheid,” “occupying” state, while whitewashing Muslim terrorists of any responsibility for their supremacist ideology, their persistent, infantile belligerence and for their poor leadership choices.

This Muslim terrorist violence against American Jews in the U.S. can be directly laid at the feet of the vile Dhimmi-crat Party — when you ceaselessly vilify Jews for having allegedly “oppressed” Muslims, you are tacitly inciting violence against them.

I’m sure the usual gang of “social justice”-minded Dhimmi-crat lawyers will be eagerly lining up to offer pro bono legal representation to these poor, “victim” Muslim terrorists. The vile Dhimmi-crats view advocacy on behalf of Muslim terrorists as a badge of honor.

Will New York become New Chitcago? Meaning will all right-thinking (and tax-paying) self-preservationists flee (a good thing) and drag their feely-goody “programs” carpet-grabbage down to Ole San Antone (a not good thing)?