“We’re going to welcome parents to come into the schools, starting in June, [to] see how much has been done to keep them safe, get reacclimated.” 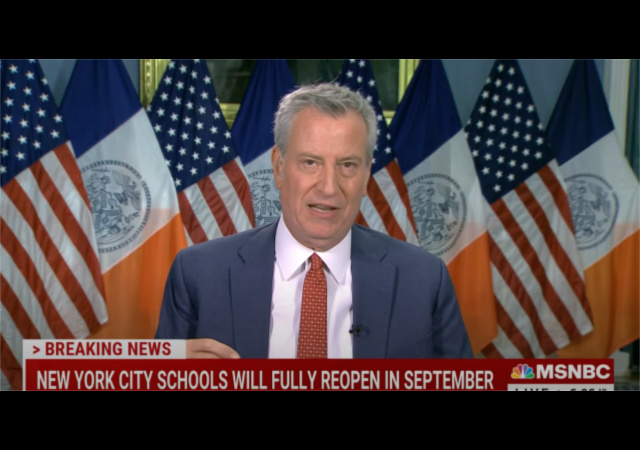 “New York City public schools, one million kids, will be back in their classroom in September, all in-person, no remote,” said de Blasio. “That’s the news. I think parents, kids, everyone has been waiting to know we’re going to be back strong, ready, safe, and COVID-19 is plummeting.”

Fully in-person, no remote, for NYC in September.

NYC Mayor Bill de Blasio breaks news on @Morning_Joe: "New York City public schools, 1 million kids, will be back in their classroom in September, all in-person, no remote." pic.twitter.com/ujqEJXExFf

“You can’t have a full recovery without full-strength schools, everyone back sitting in those classrooms, kids learning again,” continued de Blasio.

Teachers taught students remotely all year even though private schools opened in September with minimal problems. Is de Blasio also implying students have not been learning this whole time or did he have a Freudian moment? You know, admitting that remote learning basically caused students to lose a year of learning.

Catholic schools had a lot of applications for new students. I wonder how many are going to go back to public schools.

Oh, it gets better:

De Blasio claimed the Big Apple has set a “gold standard” for opening schools safely with cleaning and masking protocols — and said he’s confident he can persuade hesitant parents to get on board with “a lot of communication” by the start of the school year on Sept. 13.

“We’re going to welcome parents to come into the schools, starting in June, [to] see how much has been done to keep them safe, get reacclimated,” he said.

“Anyone who has a question, concern, come into your child’s school — see what’s going on, [and] get the answers.”

The gold standard! I am dying because Oklahoma public schools have been open for months. How about Florida? Texas? Man, de Blasio is so full of it.

Anyway, this is great news for the kids, even if they have to continue with masks.

(FYI – Weingarten is head of the teacher’s union).

Teacher’s Union does not care one bit about your kids. They want to suck money from the government (taxpayers) and push a Marxist agenda and indoctrinate kids (with neo-racist bullshit like critical race theory).

So when will the teachers show up at the open schools? 2023?

Education unions can see the writing on the wall. Whether they actually respond to it is still an open question.

IMO, there is likely to be some form of temper tantrum from some holdout union members to disrupt reopening in the fall.

But by January next year, NYC will have a new mayor, comptroller, four new borough presidents and a slew of new City Council members, thanks to term limits first approved by voters in 1993.

And I think De Blasio’s career is over, though he will continue to grift.

De Blasio is implying that they’re keeping all-day masks in place for September.

He’s only opening the schools to get Critical Race Theory indoctrination done.