Private schools have filled up across the country. As one administrator noted, “COVID was the final nail in the coffin.” 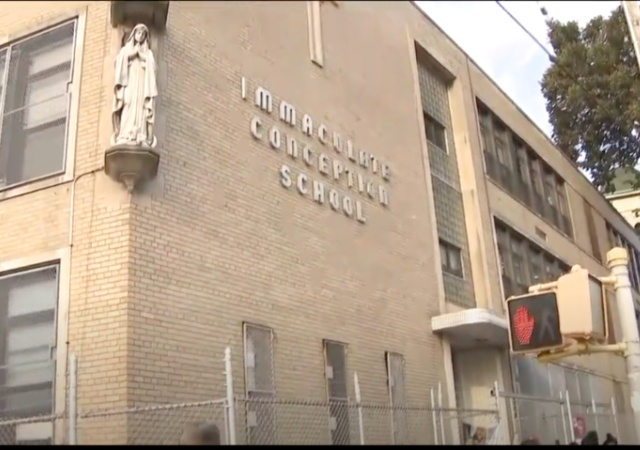 I found out that other areas across the country have also seen a rise in private school enrollment.

Frustrated by the lack of full-time classes and general public school turmoil during the coronavirus, parents have been turning to them as an alternative.

Michael Deegan, superintendent of schools for the Archdiocese of New York, said that his schools made the resumption of full-time classes a priority and that parents have been flocking because of it.

“Parents were clearly impressed with our detail and the depth and the specificity of our plan,” he said. “That developed into trust, and the confidence that our parents have in our ability to manage this crisis.”

The pandemic led to a huge spike in online traffic on the Archdiocese of New York’s website.

It has received almost 2,000 applications.

The Catholic schools in Manhatten, the Bronx, and State Island have taken in 1,000 kids.

The Diocese of Brooklyn also saw an increase in interest:

The Diocese of Brooklyn, which also runs schools in Queens, said it too has seen a sharp hike in interest from public school parents who no longer wanted to deal with remote learning.

“Parents want their children to have the opportunity to receive a high-quality, in-person education rooted in the faith, which is exactly what is happening in most of our schools five days a week,” said John Quaglione, spokesman for the Diocese of Brooklyn.

The Catholic schools in Oklahoma City have done a terrific job. Each school sent out a booklet before school started, detailing plans and changes.

Private school enrollment has gone up in Maryland’s Carroll County:

Enrollment has spiked at Carroll Lutheran School in Westminster with the number of families who have kids in the school doubling, according to Principal Mandy Gilbert.

About 67 students and 45 families attended CLS during the 2019-2020 school year, but now the school is up to 118 students and 90 families. The middle school class has nearly doubled, kindergarten, third and fourth grades have the longest waiting lists and special education population is larger than normal.

Other private schools in the county are experiencing similar increases during the pandemic while Carroll County Public School enrollment numbers have dropped.

Gilbert said that “COVID was the final nail in the coffin” for parents.

But when many area public schools went to a hybrid learning model for this school year, private schools’ decision to offer more in-class learning presented an alternative for some parents. And that translated into increased enrollment at parochial schools.

“All Catholic schools in South Jersey are either at capacity or over capacity,” said Gregory Freelon, school affairs and development director for Our Lady Star of the Sea in Atlantic City. “Right now, parents want their children to have an engaging academic experience. We (Catholic schools) are open and ready to offer that.”

“At the start of the year, we were getting calls all of the time,” said Carol Spina, principal at Our Lady Star of the Sea. “We have kids here from Ventnor and Mays Landing who were looking for five-day-a-week (in-person schooling).”

Yet they continue to support the same elites that gave them this problem.

This could be the awakening year.
Let’s hope they all voted R.

True. But what’s so stupid about it is the elites they support hate them. Witness the vitriol they directed toward ACB. In many ways the USCCB reminds me of RINOs like McCain and Romney, who grovel for the leftist media and political elite love they so desperately crave. And occasionally, when these fools prove useful, they get a pat on the head.

But most of the time they get the back of leftist hand. And like beaten wives they keep making excuses for their abusers, and crawl back for more. But then comes the back of the hand again.

The Little Sisters of the Poor have to violate their oaths of chastity and their conscience and provide contraceptives. No in person religious services. Gay bath houses can open in SF for hot, sweaty, anonymous sex. But not churches.

DeBlasio and Cuomo won’t let this outrage to stand. Parochial schools are opening? Time for the left to change the rules out of fealty to the teachers’ unions and put a stop to this.

And still the Catholic hierarchy (and not just this denomination) will lick the hand that beats it.

“Gay bath houses can open in SF for hot, sweaty, anonymous sex. But not churches.”

Well, give the Episcopal Church USA and the ELCA some more time, and they might give the bath houses a run for their money.

Nah, forget it. The leadership and clergy of both denominations are predominantly geriatric white hippies no sane person wants to see in the altogether.

I wondered that myself. I don’t know how many of these parents voted the straight D ticket, but being NYC the percentage is probably greater than zero. The urge to virtue signal – no matter how horrifying the cost – is strong for leftist parents.

Make them pay fully up front… For an entire year..
Who knows, there may be a real education in the lives of some of these families..

Most Catholic schools give you that option, yes. They also have scholarships to reduce costs and sliding scales for income. Not sure how much of that New York has right now, they got hit pretty hard with school closures at the beginning of the pandemic. Uniform costs are a pain, but many schools have uniforms, and pretty much all private schools set up used uniform sales at their schools so parents can sell clothes the kids have outgrown. At ours, its 5.00 per on the used and the proceeds are donated to the school. Shoes are 10.00 usually, but those are rate, shoes don’t really survive well if you wear them every day for a school year.

Not satisfied, Biden chose Sen. Kamala Harris as his running mate, despite her claim that membership in a Catholic organization is a disqualifier from becoming a federal judge.

…Yet through it all — the campaign, the running mate, the platform — the bishops dared not utter a word of criticism. Not content with silence, many even publicly endorsed the Biden candidacy. Worse still, some actively worked to target and silence those Catholic priests who dared speak out against what has undoubtedly been the most anti-Catholic platform and ticket in modern American history. Of the entire American Catholic Church’s leadership, only Bishop Joseph Strickland spoke out on the Biden campaign’s open assault on Catholic moral teaching.”

As they say in Italy, the floor of Hell is paved with the skulls of priests. We have quite literally a Pope who rejects any Catholic moral teaching that is incompatible with communist doctrine. I don’t know how closely any of you have been following the Chinese Communist Party’s persecution of the underground Catholic Church in China. The underground church that refuses to allow the CCP to replace Jesus as Lord with President Xi. Again, I’m being literal. In Jingxi province CHICOM officials are going into Christian homes and replacing religious images with portraits of Xi Jinping. Currently, reports from the Chinese “catacombers” are that these families are crushingly impoverished, and officials are bribing them to make this switch (but we know from the CCP’s treatment of the Uighurs and just from China’s history under communism that the CHICOMs are willing and eager to be far, far more brutal). And provincial and local CCP officials are posting pics and videos on social media of them replacing religious images with Xi’s pictures with comments such as Christians have “recognized their mistakes and decided not to entrust to Jesus but to the Party.” That party would be the only one that’s legal in the PRC, of course.

And the Pope handed them total authority over the church in China, even while acknowledging that the faithful will suffer under the deal the Vatican made with the CHICOMs in 2017. Of course, like the appendices to the Iran-Obama/Biden nuclear capitulation/pallets-O-cash-for-terrorism “deal,” the “deal” the Vatican signed with the CHICOMs is sooooo good, so so good, that it’s secret. Ordinary Catholics can’t see it. Cardinal Joseph Zen, Archbishop Emeritus of Hong Kong bluntly calls it a sell out. Given that not a single imprisoned Catholic priest has been released from a Chinese prison since it was signed, more have been imprisoned since then, the CHICOMs are destroying churches they consider (and apparently with the “Holy See’s” approval) “renegade,” has ordered two Bishops the CHICOMs never approved of to make room for “Bishops” that were “consecrated” by the CHICOMs against the then Pope’s expressed orders (one, Bishop Huang Bingzhang, is a member of the CCP’s National People’s Assembly and was excommunicated in 2011 for defying the Pope and accepting “consecration” as Bishop by the CCP), that they are currently bribing poor Christian families to replace Christ with Xi Jinping, and the Pope says nothing about it in his public prayers (he won’t shut up about the Ryohingas in Myanmar, among others) I can only conclude Zen is spot on. And perhaps literally; there are credible though unverified reports that the CCP funnels $2B/year into Vatican coffers to buy its silence.

The USCCB sold out for a lot less. Most of the Bishops remained silent about the vile Biden/Harris ticket and its anti-Catholic, anti-Christian platform. A good portion, however, actively worked to silence priests who did speak out. Only one, Bishop Joseph Strickland of the Diocese of Tyler, TX (of course; TEXAS!) denounced the Biden/Harris anti-Catholic bigotry.

The others chose begging for leftist approval over their nominal faith. Why, it’s almost as if they revealed their true faith, and it has nothing to do with what they pretend it has. And after lying down with dogs, the American bishops wonder where all those fleas came from.