Rocket was used to launch a module headed to Chinese Space Station, which is slated to be fully operational in 2022. 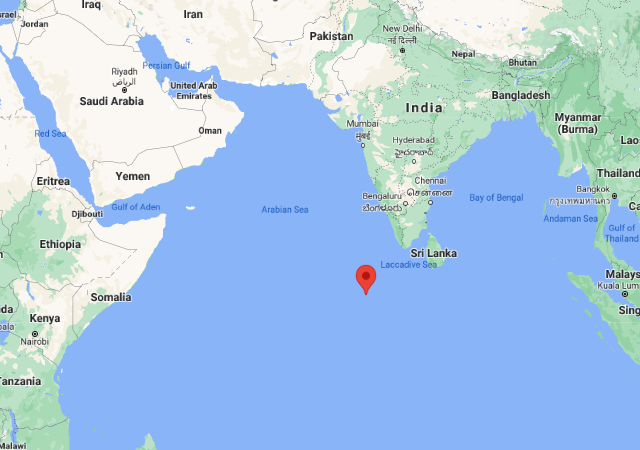 This weekend, I joined thousands of others on social media tracking the out-of-control Chinese rocket on its way back to Earth this weekend.

As predicted, the rocket returned Saturday evening, landing in the Indian Ocean.

The remnants of a Chinese rocket re-entered the atmosphere and crashed into the Indian Ocean north of Maldives, according to the 18th Space Control Squadron.

According to the U.S. Space Force, the remnants re-entered the atmosphere at 10:15 p.m. ET over the Arabian Peninsula. It was unknown if the debris impacted land or water.

In the wake of this incident, officials at the National Aeronautics and Space Administration (NASA) have blasted China for its failure to “meet responsible standards.”

“Spacefaring nations must minimize the risks to people and property on Earth of re-entries of space objects and maximize transparency regarding those operations,” said NASA Administrator Sen. Bill Nelson in a statement released on the space agency’s website Sunday.

“China is failing to meet responsible standards regarding their space debris,” he added.

And while it is fortunate that the rocket came down in an ocean north of the Maldives, the debris zone could have been much more problematic.

The Harvard-based astrophysicist Jonathan McDowell said the potential debris zone could have been as far north as New York, Madrid or Beijing, and as far south as southern Chile and Wellington, New Zealand.

Since large chunks of the Nasa space station Skylab fell from orbit in July 1979 and landed in Australia, most countries have sought to avoid such uncontrolled re-entries through their spacecraft design, McDowell said.

“It makes the Chinese rocket designers look lazy that they didn’t address this,” said McDowell.

China used the rocket to launch a module for the Chinese Space Station. The Chinese intend to conduct ten more launches that will deliver more pieces of the space station, cargo, and astronauts. They hope that by some time in late 2022, the station is open for business. So it might be a good idea to bookmark those tracking sites used this weekend!

Hopefully, the current administration is weighing the consequences of that station becoming fully operational. Mark Whittington, who frequently writes about space and politics for publications such as Forbes and The Wall Street Journal, offered cautionary analysis warnings of the consequences of blindly teaming up with the Chinese.

First, the Chinese have a record of stealing intellectual property, using cyber warfare and other industrial espionage techniques. China uses stolen technology to enhance its economic and military strength in its drive for world domination.

…The second reason that China should be held at arm’s length is that the country’s appalling human rights record — from the repression of the Uyghurs and political dissidents to the use of slave labor — makes it unworthy of being an American space partner.

Given all the problems the world has experienced due to global teamwork on Chinese biological research, smart leaders who care about their citizens would do well to heed Whittington’s advice.

This fiasco is another reason why I think the Wuflu was a failed bioweapon accidentally released by the Chinese through lax oversight and piss-poor security features. I know that the Chicoms don’t give a hoot in Hades about human life, but they looked butt-incompetent with this latest escapade.

The Soviet space program experienced some stunning early success, but soon became a comedy of errors and mismanagement after Sergei Korolev died in 1966. There is no reason to assume that the Chicoms will do any better long term.

In a Communist country nothing outside of the secret police, the propaganda machine, and certain aspects of the military runs efficiently.

The Soviet space agency had some notable successes in the 1970s and 80s. Robert Zimmerman’s excellent book, Leaving Earth, details how Salyut (for example), despite the mistakes and problems, taught the Soviets how to live in space for months at a time. They were in space for months when Americans (on the shuttle) were in space for a week. It was only after the Americans committed to the ISS, and required the Russians to do the same, that the Russian’s inability to deliver on time became clear to all.

Ah…remember Skylab? Only reason not used longer was delay in Shuttle program.

Thanks for the info! I just added Leaving Earth to my “To Read” list.

In a similar vein I have Outposts on the Frontier by Jay Chladek sitting on my bookshelf. I plan to tackle it this summer. The book is published by University of Nebraska Press, which also published the excellent Go, Flight! by Rick Houston and Milt Heflin.

Hint, how log before their space station suffers a catastrophic mishap?

Depends. Is their operating system based on Windows?

China gets scolded by NASA for its irresponsible behavior.

Ignorant or stupid comparison. All space programs have unintended failures. The US space program always tried to design for the worst case, including blowing rockets to smithereens in case of a failure.

“officials at the National Aeronautics and Space Administration (NASA) have blasted China for its failure to “meet responsible standards.”

At least NASA has half a ball. Still waiting for WHO to speak up.

If you prefer things that are out of control you have many options:

Funny how all those things have so much in common.

Shouldn’t nasa be complimenting the Chinese – an ethnic minority here in America – rather than being such racist war mongers?

Once you’ve unleashed a global pandemic on the world, with no repercussions, a rocket falling back to earth is small potatoes. No worries the ChiComs will have zero pushback.

With all the orbiting space junk up there, it would be interesting if something massive, like an old booster, whacked that Chinese space station a week before they launch their first set of astronauts to occupy it. A hard blow wouldn’t be necessary, just one sufficient to start an uncontrolled tumble with centrifugal force tearing it apart.
.

In other China news …

Huawei’s ability to eavesdrop on Dutch mobile users is a wake-up call for the telecoms industry
https://theconversation.com/huaweis-ability-to-eavesdrop-on-dutch-mobile-users-is-a-wake-up-call-for-the-telecoms-industry-160316

“…smart leaders who care about their citizens…”

LOL, must be talking about a different planet.