People are noticing an obvious lack of concern for potential impact on human beings in Chinese approach to scientific experiments. 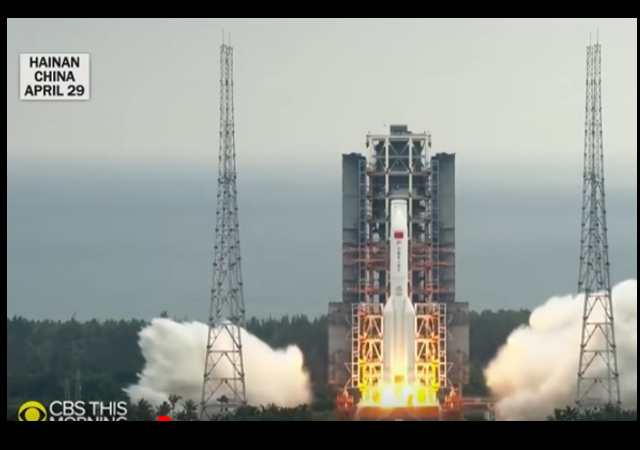 I have noted that the Chinese are gearing up for a space-race with the U.S.

What is the state of their aersospace engineering? It appears they are as good with rockets as they are with handling bat viruses.

Debris from a Chinese rocket is expected to fall back to Earth in an uncontrolled re-entry this weekend.

The main segment from the Long March-5b vehicle was used to launch the first module of China’s new space station last month.

At 18 tonnes it is one of the largest items in decades to have an undirected dive into the atmosphere.

The US on Thursday said it was watching the path of the object but currently had no plans to shoot it down.

“We’re hopeful that it will land in a place where it won’t harm anyone,” US Defense Secretary Lloyd Austin said. “Hopefully in the ocean, or someplace like that.”

This isn’t the first time this situation has arisen as a result of a Chinese launch, either. Last year, part of a Chinese rocket that was one of the largest pieces of uncontrolled space debris ever, passed directly over Los Angeles before landing in the Pacific Ocean.

The 18-ton rocket that fell last May was the heaviest debris to fall uncontrolled since the Soviet space station Salyut 7 in 1991.

China’s first space station, Tiangong-1, crashed into the Pacific Ocean in 2016 after Beijing confirmed it had lost control. In 2019, the space agency controlled the demolition of its second station, Tiangong-2, in the atmosphere.

People are beginning to notice the obvious lack of concern for the potential impact on fellow human beings in the Chinese approach to scientific experiments.

The country’s space program has executed a series of major achievements in spaceflight in the past six months, including returning rocks from the moon and putting a spacecraft in orbit around Mars. Yet it continues to create danger, however small, for people all over the planet by failing to control the paths of rockets it launches.

“I think it’s negligent of them,” said Jonathan McDowell, an astrophysicist at the Center for Astrophysics in Cambridge, Mass., who tracks the comings and goings of objects in space. “I think it’s irresponsible.”

The piece that will be dropping out of the sky somewhere is the core booster stage of the Long March 5B, which was designed to lift the big, heavy pieces of the space station. For most rockets, the lower stages usually drop back to Earth immediately after launch. Upper stages that reach orbit usually fire the engine again after releasing their payloads, guiding them toward re-entry in an unoccupied area like the middle of an ocean.

Over the past three decades, only China has lifted rocket stages this big to orbit and left them to fall somewhere at random, Dr. McDowell said.

For those of you interested, there are several ways to track the uncontrolled descent of the Chinese rocket.

U.S. Space Command is updating space-track.org at least once a day with the latest information about where the rocket is likely to fall, based on parameters such as how high Earth’s atmosphere is billowing and how drag is expected to affect the massive Chinese vehicle.

The Aerospace Corporation, which supports national security space programs, posts regularly on its Twitter feed and occasionally on Medium about the core stage status. More details about re-entry predictions are also available on its website.

Another Twitter feed to keep an eye on is that of Jonathan McDowell, a well-known tracker of uncontrolled falls in the U.S. space community. He’s been posting several times a day about the progress of the Long March 5B.

Here’s hoping that the projections of an ocean landing are correct.

The rocket that carried part of China’s new space station into orbit last week is going to fall back to earth in the next few days.

But it’s unclear when or where.

Question. Where do you want the rocket to crash, and why DC?

ROFL! Thanks for my official “comment of the day”.

That was my first choice as well

Sad news is, if it did land on DC, the Biden administration, MSM, neverTrumpers, Lincoln Project, and Politico would all find a way not to notice. Vox would ‘plain it to us.

If only it crashes on Pelosi’s head.

Upon hearing the news, Biden will start laughing. And Kamala Harris will drop to her knees as an automatic response – and then will be hit with the bad news: she is president.

Careful what you wish for, Harris.

China’s the very best neighbor in the entire world. It’s not at all like they view the rest of the world as a resource that exists only for China to consume for their own benefit.

China is the most racist nation on earth. once you understand that, their attitude and approach to everyone else makes perfect sense, from their POV.

Um, yeah, I get that. Hence the post above.

I think he was being sarcastic. Only someone as dumb as Le Bron James would say that.

Question: where do you want the rocket to crash, and why Peking? 😎

Q. Where should it fall?

A. Can’t make up my mind – George Floyd Square or CHAZ/CHOP?

Looks like just off the coast of spain, really close considering the uncertainty.

Wonder why they won’t shoot it down. It would make a spectacular event. Unless they worry about missing.

“People are beginning to notice the obvious lack of concern for the potential impact on fellow human beings in the Chinese approach to scientific experiments.”
Ya think?

It is exactly because of this kind of instability in rockets that I prefer watercress to arugula.

Didn’t China invent rocketry? I mean how embarassing is it to be the people with hundreds of years of a head start and still be behind?

Well, killing or driving off your best people has to have a deliterious effect.

They’re now killing off and corrupting OUR second-best people. They’re on their way to the first-best.

America dropped Skylab on Australia in 1979. The prior year, the Soviets gave Canada a big, hot present. In other news, we had Challenger, and there are persistent rumors (ever been proved?) about a frozen Soviet astronaut still circling the earth.

Despite China’s pretenses to modernism, their overall technical approach is stuck in this era: do we launch without the extra 100 pounds of “ohshit” equipment, or do we not make orbit at all? Given how cheap life is in China, both economically and politically, they are biased towards making these tradeoffs differently than we do.

Forgive me Leslie, but I’m chuckling at your use of “crash land” in the title. The way that term was used in aviation far as I ever heard, is any crash of a manned air-vehicle where the pilot survives and walks away. It seems like there is also an inference there is some measure of control over the descent and landing.

If it leaves a smoking hole in the ground, or has to be swept up and carted off by a garbage truck, well to me anyway, is just a crash.

I also had to laugh at the SecDef’s statement “Hopefully (it comes down) in the ocean, or someplace like that.”

The way the DoD is being politicized, I imagine SecDef would consider Texas as “someplace like that”. 😉

Here’s hoping it comes down in Xi’s hot tub with him in it.

You would think that with the surface of the globe being 71% water, there would be a good chance of that, but I’m taxing my memory trying to think of a single piece of significant space junk that didn’t come down on land.

We are all having so much fun with this one… If it has to come down on land, pooh bear’s house would be fine. The White House is a fine old building, but… And anywhere in Los Angeles or SF would be OK with me.
Desolate wastelands- let it fall in Albany NY.

Funny, but China can control our elected leaders, our schools and our media, but not a rocket.

It crashed into the Indian Ocean near Maldives.