MOXIE project to convert CO2 to oxygen & Ingenuity will be deployed as 1st extraterrestrial helicopter. 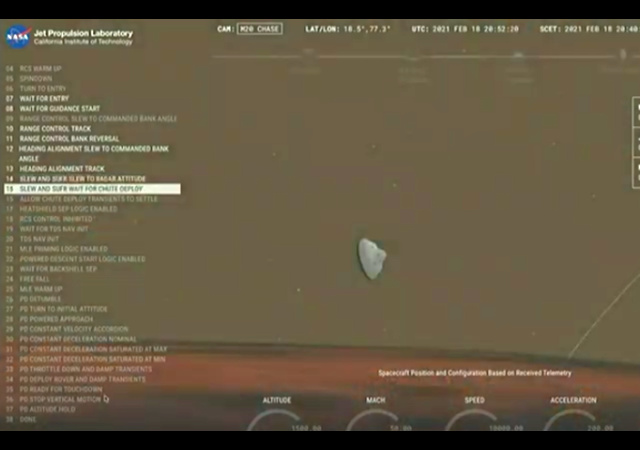 The agency’s Perseverance rover touched down on the Red Planet at 3:55 p.m. EST Thursday, bringing an end to the “seven minutes of terror” that saw a fiery atmospheric entry and parachute-assisted descent. The rover’s landing mechanism then fired eight retrorockets to slow down and guide it to a proper landing spot before using nylon cords to lower it onto the surface.

“Touchdown confirmed! Perseverance is safely on the surface of Mars, ready to begin seeking the signs of past life,” exclaimed NASA engineer Swati Mohan.

All told, the unique landing maneuver successfully decelerated Perseverance from thousands of miles an hour to just 1.7 mph at touchdown. And because of an 11-minute delay in transmissions from Earth to Mars, the rover did it all on its own – no human input was possible.

The new landing procedures were critical in anticipation of manned-missions to Mars.

Perseverance “has hazard avoidance and precision landing capability that is going to be really important when we need to land multiple systems on the surface to prepare for human missions to Mars,” Jurczyk said.

A mission objective is to seek evidence of past life. NASA selected the Jezero crater as the landing site because it is an optimum location for such research.

Jezero is a great place to do such work, mission team members have said. The crater, which lies about 18 degrees north of the Martian equator, hosted a lake the size of Lake Tahoe long ago and also sports an ancient river delta. In addition, Mars orbiters have spied on Jezero’s floor clay minerals, which form in the presence of liquid water.

Perseverance will scrutinize Martian dirt and rock with a variety of high-tech science gear, including multiple spectrometers, high-resolution cameras and ground-penetrating radar. One of the rover’s seven instruments, called SuperCam, will zap rocks with a laser and gauge the composition of the resulting vapor.

Some intriguing new technologies are onboard Perseverance that that NASA will test. These include the Mars Oxygen In Situ Resource Utilization (ISRU) Experiment, or MOXIE, which will attempt to convert carbon dioxide in the Martian atmosphere into oxygen.

Such a technology is critical for future human missions to Mars, enabling crews to produce oxygen needed for both life support and propellant. The use of ISRU technologies for propellant production in particular makes human missions much more feasible, noted Jeff Sheehy, chief engineer for NASA’s Space Technology Mission Directorate, at a Feb. 16 briefing.

MOXIE will be turned on three times in the first 30 days after landing, with the first two to test the payload. “On the third run, we’ll actually make oxygen under some conservative operating conditions,” Sheehy said. MOXIE will be run at least 10 times over the course the mission, testing its ability to produce oxygen at different times of day and seasons of the year.

Each run of MOXIE will be about an hour, producing 6 to 10 grams of oxygen. The technology would need to be scaled up by about a factor of 200 for use on future crewed missions, but the agency hopes to at least prove the technology works on this mission.

NASA refers to Ingenuity as a ‘technology demonstration,’ one that will be used to test operating a powered aircraft on another planet. The agency has warned that this is a very experimental test and that it can’t yet say whether Ingenuity will be able to successfully take off and fly on the Red Planet.

Assuming the helicopter does take off and fly as planned, NASA will conduct multiple flight tests over a 30-day period starting this spring. To kick things off, Ingenuity will only fly a few feet off the ground for around half a minute before landing. That will be a ‘major milestone,’ NASA explains, marking the first powered flight to happen on Mars.

Additional flight tests will increasingly push the limits, keeping the helicopter in the air for longer and taking it farther distances. After a Martian month of demonstrating Ingenuity’s technology, NASA will go back to its Perseverance rover mission. Only minimal commands from NASA will be sent to Ingenuity, with the aircraft doing most of its maneuvers on its own.

Congratulations to the NASA and JPL teams.

I aspired to be an engineer at NASA as a teen, while in college those aspirations were dash, in that there was a huge cutback, with PhD’s cut loose by NASA pumping gas.

Zowie. Now they can bring Matt Damon back home safely 😉 ;). This is so much more like the NASA of old. Kudos and three cheers for this. And that video of the real sights and sounds of Mars.

Do you suppose this is the result of the Muslim outreach?

Aren’t the Commies supposed to be landing soon also? Perhaps their rover will set out on a search and destroy mission to find MOXIE. Maybe MOXIE will jam the signals to the commie spacecraft and then video it’s crash onto the surface? Wow, that would be cool.

I’m proud of our accomplishment but how do the people of TX feel about this? Same feelings about looking for water on Mars. We have some problems on Earth that need our attention.

I’m guessing you are Texas, hope you are ok/surviving!

No I’m on the east coast. Thanks for the concern.

This TX story caught my interest. I find the comment section so much better than the nightly news. A real back and forth of ideas.

We do know that at least one Texas congresswoman wants to find the flag that the astronauts planted there.

I’m in Texas and love this Mars stuff. We’re able to walk and chew gum at the same time down here.

That’s good to know but I thought it might be ride horses, run cattle and land on Mars.

Video with sound is fake.

Im more concerned they removed footage of the Transformer attack!!!

That’s from the Curiosity rover, not Perseverance. Curiosity did not have microphones.

“When the Perseverance rover arrives at Mars, it will have two microphones. It will make it possible for our robots to not only touch and taste, but finally hear, the sounds of Mars.

NASA spacecraft that traveled to Mars in the past have carried microphones twice. Unfortunately, one of those missions, the Mars Polar Lander, failed. The Phoenix Lander had a microphone on the spacecraft’s descent camera, but that instrument was never turned on.”

We’ll get audio eventually but not yet, so…fake.

Correct, all I’ve seen is a grainy B&W photo, I think that’s the only thing it’s sent back so far.

Did they thank President Trump?

They should, otherwise they would still be rubbing muzzies backs

De facto president Susan Rice is cutting missions (you didn’t think Biden was in control did you)?

Elon Musk now must meet with Putin about space projects, instead of the US:
https://www.forbes.com/sites/roberthart/2021/02/15/kremlin-considers-elon-musks-clubhouse-invitation-to-vladimir-putin/?sh=208085816971

I looked all afternoon yesterday for this since it was 3:55 est 2/18 when it landed

I believe this is another reason for Biden to get a nobel peace prize right?

Damn! All this way and not a Sheetz or rest stop in sight! I’d have to go bad!

Astronaut rules expect you to urinate and defecate in your suit.

Can Kamala be on the next rocket? 😀

Don’t show her a picture of the rocket. She may get ideas.

This is what results from making sure you know how to get the right answers from your math. If that’s “racist” and must be stopped, then there won’t be many successful space probes.

Racist colonizers! The 1975 Project is an effort to tell the true history of how the Martians were enslaved and eventually exterminated by the AmeriKKKans. In 1976 AmeriKKKa illegally invaded Mars with the Viking 1 spacecraft landing at Chryse Planitia on July 20, 1976, a date that will live in infamy.

You can support the important work of the 1975 Project! Cash donations only (small unmarked bills) can be made by securing them in a brown paper band and leaving them in the trunk of the abandoned Oldsmobile at the corner of Grove and MLK. No cops or the deal is off.