AP: “Palestinians have clashed with Israeli police on a nightly basis since the start of the Muslim holy month of Ramadan.” 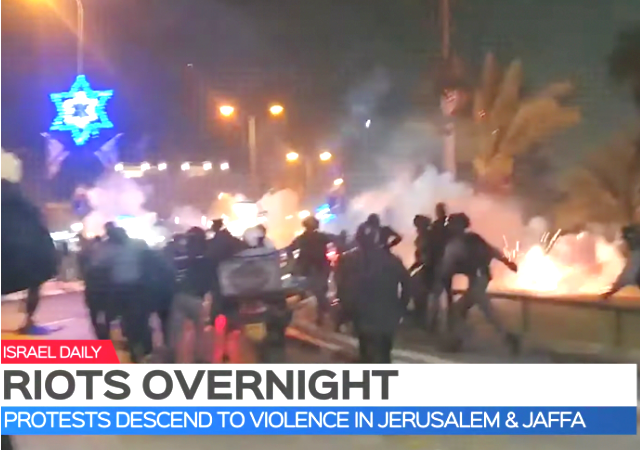 Israel is facing a two-pronged attack as Arab street violence in Jerusalem is accompanied by a surge in Palestinian rocket fire on Israeli cities.

The Ramadan rioting has intensified with more and more Palestinians converging on the Temple Mount. “Skirmishes broke out again on Friday when tens of thousands of Muslim worshippers left Jerusalem’s revered Al-Aqsa mosque after night prayers.” France24 reported.

The newspaper Israel Hayom on Sunday reported the ongoing Arab rioting in the Holy City:

Israeli police and Palestinians scuffled outside Jerusalem’s Old City walls overnight into Sunday as tensions flared during the holy Muslim month of Ramadan. (…)

Hundreds of police officers in riot gear deployed around the capital’s Old City after nightly clashes spilled into the Gaza Strip and the West Bank. Some Palestinians threw stones and bottles as police on horseback dispersed the crowds, though the violence appeared less intense than on previous nights. (…)

Clashes and violent incidents have occurred almost nightly in Jerusalem, holy to Muslims, Christians and Jews, since the start of Ramadan on April 13. Most center near the Damascus Gate in the Old City’s walls and have flared in recent days as thousands pour out of the historic gateway after leaving the nearby Al-Aqsa Mosque following Ramadan nightly prayers. (…)

Israelis have been angered by videos on social media showing Palestinians assaulting religious Jews in the city at random.

The Ramadan rioting has been accompanied by a spate of disturbing videos of Arab gangs beating and humiliating religious Jews in Jerusalem.

In what appears to be a new disturbing social media trend, young Arab men are posting videos of themselves assaulting Orthodox Jews. The clips, most of them posted on the social media platform TikTok, have gone viral among Arab users — garnering likes and approving comments.

Insanity in #Jerusalem as Arab youth beat a Jewish woman with some sort of wood plank and chair, then kick her in her ribs!

She thankfully got away as the attackers stop once they hear the police sirens. pic.twitter.com/2GORUuPqF7

“A series of videos posted online have … shown young Arabs attacking ultra-Orthodox Jews,” the French public broadcaster France24 reported. According to the AP, “One video showed what appeared to be a group of Palestinians beating an ultra-Orthodox Jew near Damascus Gate. They could be seen punching, kicking and throwing him to the ground before police chased them off,” the news agency added.

The noted Israeli blogger David Lange compiled some of these disturbing circulating in TikTok and other social media platforms (view here).

A new worrying trend appears to be gaining momentum among Arab youths in Jerusalem, who videotape themselves harassing ultra-Orthodox Jews in the capital as a “challenge”, which they then upload to the social media platform TikTok.

Violence in the Arab sector in Jerusalem has escalated since the start of the holy month of Ramadan. On a daily basis, young Palestinians clash with police and harass Jewish bypassers, the latter becoming a social media phenomenon of its own.

One of the victims is 15-year-old Yedidia Epstein, who said he was pushed, beaten and slapped in the middle of a busy street in Jerusalem, in front of several police officers. “I was filming near the Damascus Gate and at some point, Arab youth came up me and hit me,”

Epstein told Ynet. “He slammed me hard into the ground and my camera fell. I started running away … it all happened in front of the eyes of the cops, who were there.”

Epstein said he did not provoke the attack in any way – as was the case with other similar incidents in recent days.

“There is a competition for likes and views,” said Epstein. “A video of an Arab slapping an ultra-Orthodox man will get you both, so now everyone is trying to get more likes and views.”

Look at these Arabs firing fireworks AT JEWISH HOMES in East Jerusalem. Pray for Israel's security forces who are working around the clock. pic.twitter.com/6LDY5HkFxa

“Sirens sounded in numerous Israeli communities near the Strip overnight, including Ashkelon and the Eshkol, Sdot Negev, Sha’ar Hanegev and Hof Ashkelon regional councils,” The Times of Israel reported. “The Iron Dome missile defense system intercepted six of the projectiles. Some fell in communities while others landed in open areas.”

The Gaza-based jihadi groups, protected by Islamic terrorist outfit Hamas, vowed to escalate rocket attacks on Israeli cites as Arabs rioters desecrated the peace of the Holy City. “We will burn the occupation’s settlements for you, O Jerusalem. The greatest has yet to come,” a spokesperson for the terrorist group Al-Aqsa Martyrs’ Brigade said.

The Times of Israel on Saturday reported Israeli government’s response to the escalating Palestinian terrorism and rioting:

Prime Minister Benjamin Netanyahu said to “prepare for any scenario” vis-a-vis the Gaza Strip on Saturday afternoon amid soaring tensions with the Hamas-run enclave following overnight barrages of rockets fired at Israel. (…)

“First of all we want to ensure that law and order are respected… now we demand compliance with the law and I call for calm on all sides,” Netanyahu said in a statement after the meeting.

In a briefing with the heads of regional councils in areas near the Gaza Strip, [Defense Minister Benny] Gantz said that the military was ready in the event of an escalation in the Palestinian enclave and “will do what is necessary” to restore calm, according to his office.

The surge in Arab violence and terrorist attacks comes as the Iranian regime renewed its threats against Israel. Iran’s military chief declared that Israel would soon “disappear” from the map, the Israeli media reported this week. Israel “will disappear at the hands of the nation you expelled from their land [an apparent reference to the Palestinians],” head of Iran’s Islamic Revolutionary Guard Corps, Hossein Salami, said.

It is likely that Iran is playing an active role in the current wave of incitement and terrorism against Israel. According to the jihadi group Hamas, Iran’s IRGC operatives have been giving ‘direct orders’ to Palestinian terrorists in Gaza. Many of the rockets falling on Israeli cities have been delivered by Tehran.

Perhaps someday the Israeli’s will wake up and treat these attacks for what they are, declaration of war.

They should destroy the perpetrators of these attacks. And the Israeli’s know exactly who they are.

Israel would be well within its rights to turn Gaza into ash. Israel only restrains itself because it knows the international outcry from the global Jew-hater Club would be vociferous.

But, there isn’t a country on Earth that would restrain itself in a similar manner, if it faced unrelenting and persistent rocket attacks, from a neighboring foreign region.

A good place to start is by reducing Iran to stone age living conditions.

Areas of Palestine which are hotbeds of terror should be fuel air bombed. They like terror, so give them enough terror that their appetite for terror is satisfied.

The civilized world has gotten way too easy and lax on this kind of violence and thuggery.

So sad to see Israel and America being destroyed from within

At least Israel has BIbi…

In bothe cases the cure is the same, out the Fers down.

Just another night in Portland.

Honesty would demand that the vile Dhimmi-crats occasionally criticize Islam’s pathologies and the despicable behavior of its worst adherents, but, they can’t bring themselves to even do this. Such an assessment would require fairness and objectivity.

You’d think by now that the Arab Muslim, so-called “Palestinians” would be embarrassed by now, at their decades-long infantile belligerence and Jew-hate. It certainly doesn’t reflect well upon their chosen ideology of hate.

There needs to be a run on those 72 virgins, though I hear that none have ever been deflowered because those Arabs are all impotent by the time they get there.

And, vile Xi-den and his despicable Dhimmi-crat comrades earnestly believe that the “Palestinians” are earnest partners in peace negotiations. How manifestly stupid and idiotic do you have to be, to believe this nonsensical conceit? Seventy-plus years of this crap, and, the “Palestinians” are still committing terrorist attacks against Israeli Jews.

Why do Twitter and the other social media platforms allow these vile Muslim terrorists to continue to have platforms to post their propaganda hate?

The tech overlords will kick conservatives off a platform for no reason, but, it’s okay for Muslim terrorists to preach hate and post their videos.

As long as you hate America, freedom, and liberty, you will have a voice on twatter and facistbook.

Perhaps it’s time for Israel to take off the kid gloves and deal with the situation like they should have years ago. And make it readily apparent to all the palestinians and their supporters that this behavior will no longer be tolerated or allowed.

Run by the same bunch who run Antifa?
Same tactics to take down Bibi and now this…