Netanyahu to Hamas leadership: “You can’t hide, not above land or below it.” 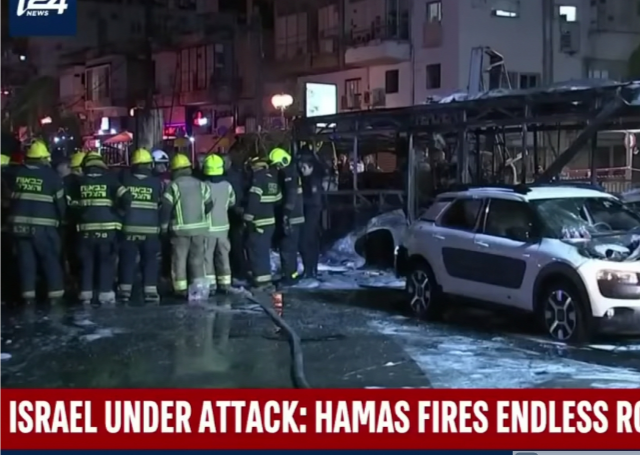 As Hamas’s murderous rockets rained down on Israeli civilians for the seventh day in a row, the Israel Defense Force (IDF) is intensifying the targeting of terrorist bases and leading operatives inside Gaza.

The IDF targets include “a number of surface-to-surface missile launch sites, terror cells, a Hamas intelligence center, observation posts on land in and at sea off of the southern Gaza Strip, and anti-tank missile launch sites and cells,” the Jerusalem Post reported on Sunday.

Among the top Hamas leadership hit in the latest round of counterstrike are the homes of Gaza’s top Hamas leaders, Yahiyeh Sinwar and Khalil al-Hayeh. “Both homes serve as bases for terrorism,” the newspaper Israel Hayom confirmed.

The strikes came as Israeli Prime Minister Benjamin Netanyahu defended his country’s counter-terrorism measures. “You know and I know no country would tolerate this. Israel will not tolerate this. Israel has responded forcefully to these attacks and will continue to respond forcefully,” Netanyahu told the international audiences in a televised statement on Saturday night.

Addressing the Hamas leadership he said: “You can’t hide, not above land or below it. No one is immune.”

A short while ago, we struck a warehouse containing weapons, located in the house of a Hamas operative in central Gaza, and a Hamas naval weapons warehouse in southern Gaza.

The Associated Press reported the ongoing counter-terrorism strike against the Hamas top brass:

On Saturday, Israel bombed the home of Khalil al-Hayeh, a senior figure in Hamas’ political branch, saying the building served as part of the group’s “terrorist infrastructure.” There was no immediate report on al-Hayeh’s fate or on any casualties.

The bombing of al-Hayeh’s home showed Israel was expanding its campaign beyond just the group’s military commanders. Israel says it has killed dozens in Hamas’ military branch, though Hamas and the smaller group Islamic Jihad have only acknowledged 20 dead members.

Since the conflict began, Israel has leveled a number of Gaza City’s tallest office and residential buildings, alleging they house elements of the Hamas military infrastructure. 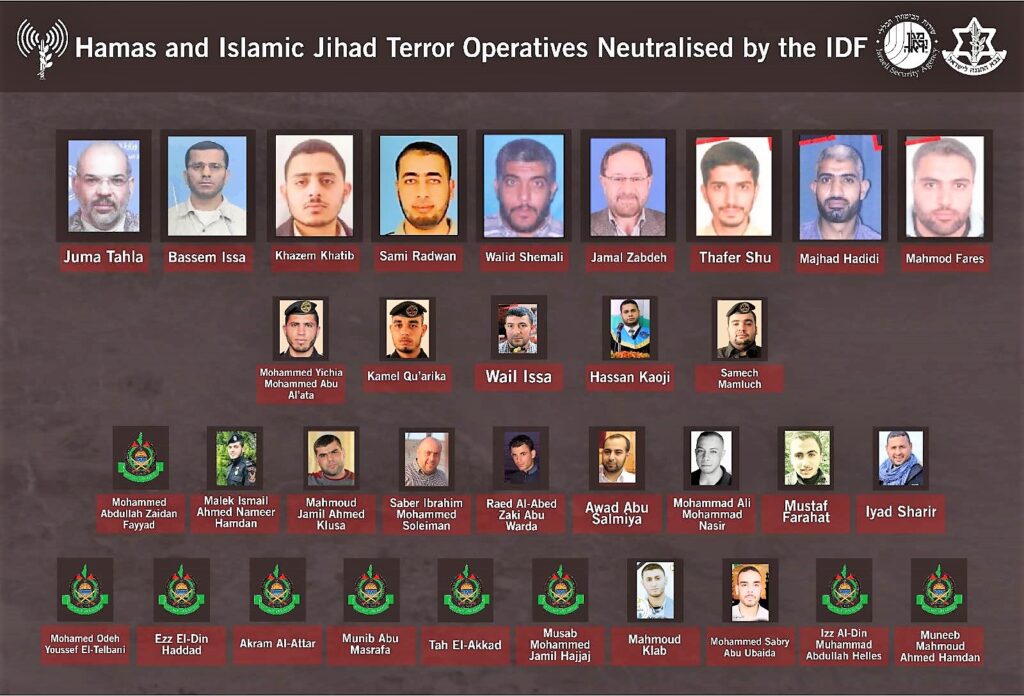 One of the terrorist targets hit by the Israeli air force included the 12-story “al-Jalaa” building that housed the Gaza offices of the Associated Press and Qatari state-funded Al Jazeera. The Hamas military intelligence was operating out of the complex, official Israeli sources confirm.

The AP, which prides itself on its investigative journalism, apparently had no idea that it had been sharing “office space” with a notorious terrorist outfit all along. “We have had no indication Hamas was in the building or active in the building,” the “horrified” and clueless news agency declared in a statement.

The targeting of the building was criticized by leading U.S. Democrats, including Senator Robert Menendez. “I am deeply troubled by reports of Israeli military actions that resulted in the death of innocent civilians in Gaza as well as Israeli targeting of buildings housing international media outlets,” he said.

President Joe Biden also slammed the strike as he “raised concerns about the safety and security of journalists” during a phone call with Prime Minister Netanyahu, a White House communique said.

The journalists and residents of the building were informed well in advance of the imminent air strike by the IDF — a standard Israeli practice that saves lives, while inevitably warning terrorists as well.

IDF Spokesperson Hidai Zilberman responds to criticism by Biden and Menendez of Israel's strike on a building that housed a number of international media outlets and which the IDF says also held Hamas and Palestinian Islamic Jihad facilities.https://t.co/XmjuPLrRJ9 pic.twitter.com/JSZhBlJ2yr

There are indications that diplomatic pressure from the Biden administration, the European Union, and the United Nations may soon force Jerusalem to cease the ongoing anti-terrorism operation. “Amid growing US pressure, Israel said considering Gaza ceasefire,” The Times of Israel noted on Sunday.

Israel’s security cabinet was scheduled to meet Sunday afternoon to discuss the continued operation in the Gaza Strip amid growing international pressure to begin working toward a ceasefire with Hamas.

On Saturday, senior defense officials were pushing Prime Minister Benjamin Netanyahu and Defense Minister Benny Gantz to start working toward a ceasefire that would bring an end to the IDF operation. This is based on an understanding that the military has met most of its goals since the beginning of the operation on Monday evening.

While the world mounts pressure on Israel to halt strikes against Hamas, Israeli civilians face relentless rocket barrage from Gaza.

Hamas, Palestinian Islamic Jihad, and allied terrorist groups have fired over 3,000 rockets at Israel since their offensive began seven days ago. “This was more than half the number fired during 51 days in a 2014 war between Hamas and Israel (…) and more intensive even than Hezbollah’s bombardment from Lebanon during the 2006 war between Israel and the Iran-backed Shi’ite group,” the Reuters reported.

The murderous rockets continued to rain on Israeli civilians during the Jewish Shabbat and Sunday. “Hamas rocket barrages on southern Israel continued Sunday with almost 300 projectiles launched at Israel from the day before, 120 on Saturday night alone,” the Jerusalem Post reported.

“About 450 failed launches fell in the Gaza Strip,” Israeli TV channel i24News noted. This makes Hamas the biggest threat to the inhabitants of Gaza.

Europe witnessed angry pro-Hamas demonstrations over the weekend, with violent clashes in Paris and Berlin.

“Police in Paris on Saturday fired tear gas and aimed water cannons at protesters defying a ban on marching against Israeli attacks on Gaza, trying to disperse demonstrators gathering in groups of several hundred,” Reuters reported.

“One of the rallies in Berlin [on Saturday] saw a turnout of more than 3,500 people but turned violent when police broke it up (…),” the German public broadcaster DW News reported. “Protesters threw bottles and stones as well as firecrackers at officers, authorities said. Some hit officers and police responded with pepper spray,” the news outlet added.

Calling the weekend protests “mostly peaceful,” the DW News described some of the outbursts: “Some protesters tried to burn Israeli flags, shouted expletives about Jewish people and called for the bombing of Tel Aviv.”

These anti-Israel protests have been accompanied by violent antisemitism in Europe, particularly in Germany. Alarmed by the wave of attacks on the Jewish community in Germany, the Israeli envoy urged Berlin to act. “I urgently request the German authorities to do everything to ensure the security of our community here,” Ambassador Jeremy Issacharoff said on Friday.

but they cant find Hamas in their own building

My heart, my soul, my prayers are with Israel.

Strength to Bibi, the IDF, and the Israeli people to prevail.

You are showing the world what true courage is.

This time there should not be any negotiations. Warn Hamas and the public that there will be fuel air bombs, then follow through. Winning a war is about inflicting massive loss of life and property Those who hate Israel will continue to do so, that hate needs to be converted to fear.

Even if there weren’t strong affirmative reasons to side with Israel (there are), Hamas’ tactics should make it impossible to side with them.

In the end, Hamas is more or less the same as a gang of bullies. By 6th grade I learned that the only way to deal with a bully was to kick the living shit out of them.

As an adult, dealing in corporate politics, I found that the same applied, not fists, bats or chains, then wearing a suit and being a very nasty SOB when necessary.

When I moved into Beltway politics, the same applied.

I also learned it was best to on the offense, escalating warfare until opponents tucked tail and ran, and I was still prone to continue punishment past the point where they wanted to temporality suspend the battle to regroup.

I think the best analogy is that when some pulls a gun, you do not just wound them, you terminate them. In life and death situations, it is not like TV.

Hamas needs to be pounded unmercifully until they are either destroyed or the surviving supporters come to the legitimate position that they will never cross Israel again. The old SWAT standard comes to mind: “Reduce them to hair and shit.”

To Israel’s credit, they don’t exercise liberal license to indulge diversity [dogma] (i.e. color judgment). They react to provocations from Hamas, Islamic Jihad, and their Iranian patrons with measured responses. Fatah seems to have reformed. And the relationship with their historically hostile neighbors had improved markedly when Trump succeeded Obama.

AP has again beclowned itself.

The Jew haters come out at the drop of a hat, and are explicit in the hatred and violence. Guess some people were looking the other way. Imagine if Jews took to the streets this way. The scorn would be magnificent. Especially from woke Jews.

“President Joe Biden also slammed the strike as he “raised concerns about the safety and security of journalists” during a phone call with Prime Minister Netanyahu, a White House communique said.”

I am waiting to see what Biden says about this:
https://legalinsurrection.com/2021/05/the-intercept-blasted-after-report-puts-targets-on-right-wing-reporters-covering-antifa-blm-riots/

still waiting. And I suspect I will be waiting a long time. Like forever.

They are not really journalists, for much of my life I was closely associated with journalism. There used to be a big difference between PR hacks and Journalists, no so today. So go ahead and do what needs to be done. Propaganasists of terrorists are really just as bad as terrorists.

Biden is upset one of his propaganda arms was outed as a Hamas supporter….

I am amazed at how well the Israeli strike was as a perfect demolition. Planned demos look like that.. but from a missile strike… a lot went into putting that building down. Architecture, engineering and ordnance.

Such a cool video. Enjoyed watching the building fall.

When the American Jews finally figure out that the lefties include THEM in the “final solution,” will they still vote for dems? Yes…yes they will, ‘cuz liberalism trumps survival.

The germans are abandoning their own history and allowing acts of hatred toward the same folks they tried to annihilate. In the 30’s, how many Jews refused to believe their lives were in danger? I’m guessing about 6,000,000.

Yes, this exactly. American liberal Jews are their own worst enemy.

They apologize for their very existence, condescend to any Jew who isn’t them, and want to make nice with everyone else. “Oh, please, don’t hate me.”

Get a clue: you cannot make peace with people who hate you. And appeasement never works.