A human rights council that has Venezuela, China, and Saudi Arabia! 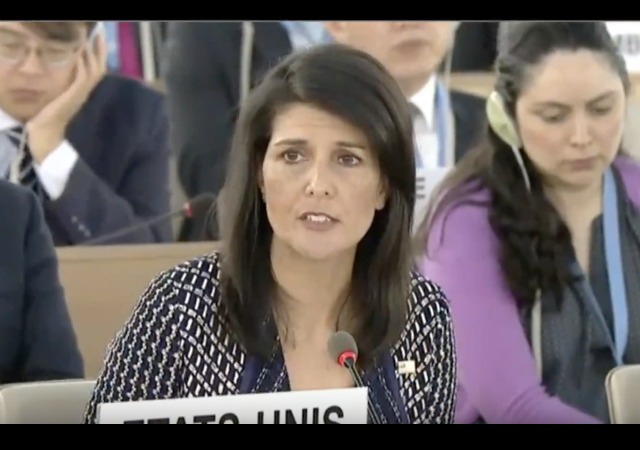 US UN Ambassador Nikki Haley continues to kick butt and take names! During UN speeches in Geneva, Haley pointed out that the organization needs to make a few changes to its Human Rights Council.

A council that includes China, Saudi Arabia, and Venezuela. The joke of a council needs changes, but Haley “stopped short of an outright threat of withdrawal if change is not forthcoming.” From Fox News:

There was no doubt, however, that Haley meant business, as she declared at the Graduate Institute of Geneva that the Council’s inaction on a wide range of human rights abuses mean that it has “failed,” which “re-enforces our growing suspicion: that it “is not a good investment of our time, money, and national prestige.”

Among other things, she demanded that the Council “must act to keep the worst human rights abusers from obtaining seats” via an essentially rigged system of regional representation, and choose members in an open vote rather than through secret balloting to that the rest of the world knows who is supporting human rights violators for membership.

Haley also demanded that the Council abolish its permanent Agenda Item Seven, which calls for regular examination of the human rights situation in “Palestine and other occupied Arab territories,” which serves as a regular forum for diatribes against Israel. No other country is selected by the Council for such treatment.

As one result, Haley noted, “the Council has passed more than 70 resolutions targeting Israel. It has passed just seven on Iran. This relentless, pathological campaign against a country that actually has a strong human rights record makes a mockery not of Israel, but of the Council itself.”

She also said it was “crucial” for the Council to pass “the strongest possible resolutions on the critical human rights situations in Syria, the Democratic Republic of the Congo, Eritrea, Belarus, and Ukraine,” and specifically called for the increasingly brutal Marxist government of Venezuela to “voluntarily step down from its seat on the Human Rights Council until it can get its own house in order.”

Underlining the last point, Haley also attended a U.S. sponsored side event at the Human Rights Council session that gathered an array of human rights activists and academics to decry the Venezuelan government’s crackdown on waves of protest against the regime of President Nicolas Maduro.

“The Venezuelan government is in the midst of destroying human rights and democracy in Venezuela,” she said at the event.