Brazile has joined ABC News and Juan Williams will remain a FOX News contributor based in Washington, DC. 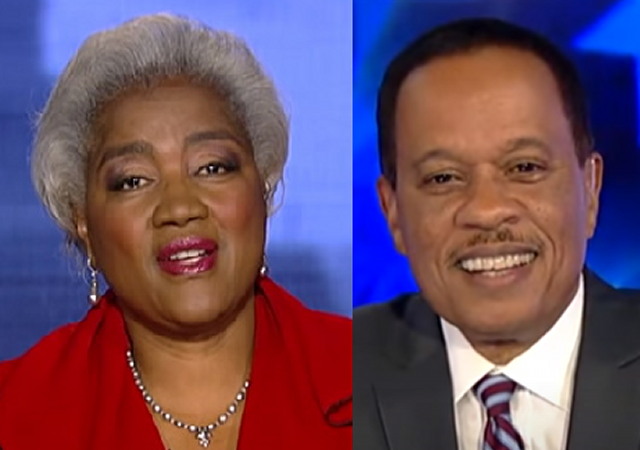 Two big changes took place on the FOX News channel this week with little fanfare. Former DNC Chair Donna Brazile left her role as a contributor, and liberal journalist Juan Williams stepped down from the panel show ‘The Five.’

You have to wonder if the network is still feeling the effects of anger from former fans after the 2020 election.

In both cases, the changes were made amicably. Brazile says she left of her own accord.

Brazile was hired by the network in 2019 as a liberal analyst. She praised the Black Lives Matter movement and has criticized former President Donald Trump, which was often a departure from the views of other commentators. She quietly joined ABC as a commentator last week, according to the report.

.@donnabrazile has left Fox News. She tells me “Fox never censored my views in any way," but "I’ve accomplished what I wanted at Fox News.” The network had hoped to keep her.

Another Fox liberal, Juan Williams, is out at "The Five" but staying at network https://t.co/0y04MmRDGC

Juan Williams announced his departure from The Five on the air, explaining that he has opted to remain in Washington, DC now that the show is going back to broadcasting in-person from the network’s studios in New York.

Jordan Williams reported at The Hill:

Juan Williams, liberal co-host of Fox News’s “The Five,” announced on Wednesday that he is leaving the show.

Williams, who is also a columnist for The Hill, made the announcement during the “One More Thing” segment of the show. He said he decided to stay in Washington, D.C., when the show resumes filming at its studio at Fox News Media’s headquarters in New York City.

The Five is set to begin filming from headquarters again on June 1.

“COVID taught me a lot of lessons. As the show goes back to the New York studio, I’ll be staying in D.C.,” Williams said.

You can watch Juan’s announcement below:

Juan Williams announces that today is his last day hosting The Five. He will stay in DC as the show moves to NYC and continue his work as a Fox News analyst. pic.twitter.com/vRlJR4ZNEp

The Five is one of the highest rated shows on cable news, which makes me wonder if there is more at play in Juan’s exit than we are being told.

I watch the show pretty regularly and Juan’s Trump Derangement Syndrome sometimes forced me to change the channel. Now that he is staying at the DC studio permanently, I expect he will have a greater presence on FOX News Sunday with Chris Wallace, which is a better fit for his views.

Both Donna and Juan lost their minds and creativity because of Trump, essentially offering party line words as if poll tested. When pushed by the other voices, they just repeat. No real discussion. Prior, they at least engaged and pretended to debate. For example, Juan did engage with Krauthammer at times on Bret Baier prior to Trump.

The debate format in general seems to be a thing of the past perhaps.

Both had their heads stuck where daylight does’t shine.

Yeah, they’re bozos, but who really are the fools: them, or US – who tolerated them?

I would have loved to hear Charles and Victor Davis Hanson have a discussion, too bad it will never happen in this life.

Brazile always seemed to be preaching, even scolding. Williams preached, too, but not as stridently as Brazile. He seemed willing to discuss, even though it was obvious his opinions wouldn’t change. She was just arrogant.
.

I am no longer a big cable news consumer. Prior to the 2020 election I would tune in more often than before that. Still seems to me that when The Five was on my slate, Juan would never debate beyond whatever his opening statement was. If anything changed from pre-2020 Juan it might be that he was more eager or regular about making insults, especially suggesting or hinting at supremacy or fascism or whatever the current mantra was for the left. Which is why he and Gutfeld went at it more often. At least that’s my impression from my sampling.

Juan never has an original thought, he is DNC talking points to core and lost reality.

All you need to know about her is that she secretly gave Hillary Clinton the presidential debate questions in advance.

She’s as scummy as Clinton.

Both of them did accomplish what they set out to …

Fox lost a lot of viewers, even though it’s still #1 on cable in most slots, people have stopped watching… I never watch the “news”, too much “fake news”.

Post-Trump they are all down. CNN, rightfully, is in the tank. They’ve lost almost 2/3 of their audience. MSNBC about half. FNC lost maybe 15%? I think what is true is that people are just tuning out overall. Fatigued.

I’ve never known Donna to quietly do anything.

She quietly provided Hilary with the debate questions. Good riddance!

If FOX wanted to do good business, they’d shitcan about half of their crew

they should bring back Meggers and Bill and some others

and dump Sean on his black belt ass, he’s a boring turd

Is Meggers = Megyn? I doubt she has any interest to go back to any corporate location. After Fox and NBC she’s doing exactly what she wants now. If you watch O’Reilly, he’s showing his age. So he’s probably also in the perfect landing spot, too, running his own operation where being sometimes forgetful or making verbal mistakes is charming and accepted. And not attacked every second by Soros-paid unemployed boys and girls.

Hannity was never, ever, my cup of tea. He has always been too shrill. Almost child-like at times.

For me, even Tucker doesn’t hit the mark 100%, but he’s the only thing I put on my slate once or a few times a week on FNC. My overall point is that there is no longer a compelling reason to watch FNC for me and hasn’t been for a while. Thankfully, there is plenty of competition for information. O’Reilly’s new outlet. Following Megyn and Atkisson and their production (websites and podcasts), etc, etc.. I believe more people are thinking like me now given the way cable TV is dying, too.

Networks are rapidly losing any relevance, FOX being the caboose.

You’re forgetting rino rat Paul Ryan is on the board of directors of Fox!

I enjoy watching Juan look like the lone crazy voice on the Five. Donna was unbearable to watch…she was a cackling monkey that just flat out made up stuff.

And the purple hair!

I’ve never understood why they hired Brazile in the first place. She was already known to be a scam artist and cheater. Nothing she get said could be taken at face value and she was so biased you could never have a logical discussion with her.

Brazille shall always be remembered as the lying, cheating whore who fed questions to the Clintoon campaign. Fuck off whore.

LOL. Seems personal to you.

Maybe it is becoming personal because of the scope of the crap they are pulling. Their hook and crook methods, a slowly unfolding coup, may have something to do with it being personal

So every Dem is a whore then. Because, you know, it’s personal. Got it.

Her moral equivilant is a heartbeat away from becoming president.

I used to watch FNC for half an hour or so with my morning coffee. Since the Trump/Wallace debate, I haven’t had it on once.

Newsmax is sometimes interesting. If I want the anti-American view, RT does a good job.

I am done with people playing a Conservative on TV. Looking at you, O’Reilly and Hannity.

Curious what you like on Newsmax. Outside of Spicer’s spot I haven’t found anything very interesting. But I’ve only lightly sampled it.

RT is actually interesting, once you get past the idea you’re watching propaganda. Kind of like US soldiers of WW2 enjoying Tokyo Rose’s otherwise good radio program.

Two morally vacuous individuals, who would do anything for a dollar (including claiming “victim status” when they are in the 1% of wealthy); and FOX or should I say the “New ‘CNN'”. Have not tuned in for three years or more. … Television / cable has no value as a source for objective news or thoughtful commentary.

Williams is 67. Still young for the talking head game. Leaving the Highest rated news show on TV is strange. Especially of you see yourself as an influencer.
I believe he specifically was charged by FOX to push the Dem talking points, in the face of facts. All the others on the panel had started to push back hard using facts. The constant lies of the CDC and Dems surrounding COVID became too much.
It was the on air push back that Williams was tired of. Not sure who they will get to replace him to push the Dem talking points. Waters, Guttfeld, and even Peireno had stopped ignoring the factual lies of Dem talking points.