“The levels of taxation and spending in Mr. Biden’s plans would expand the federal fiscal footprint to levels rarely seen in the postwar era.” 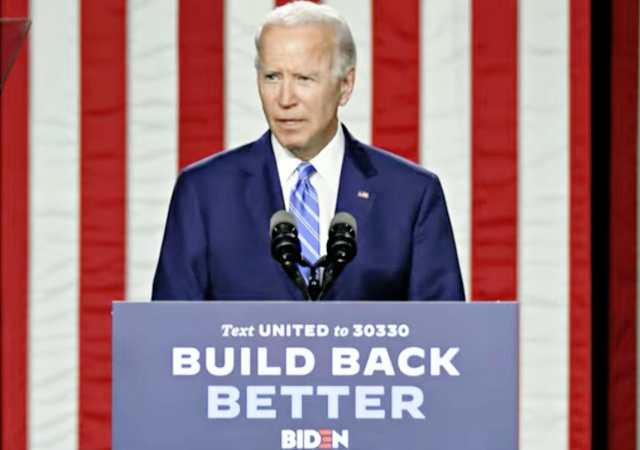 President Joe Biden will release his $6 trillion budget on Friday, sticking with the tradition of dropping “bad news and unflattering documents” on the last day of the week.

The budget is disgusting and should bother everyone.

Can we not? Yes, it involves raising taxes:

Mr. Biden’s plan would raise the top tax rate on capital gains to 43.4% from 23.8% for households with income over $1 million. He would also change the tax rules for unrealized capital gains held until death.

The effective date for the capital-gains tax rate increase would be tied to Mr. Biden’s announcement of the tax increase as part of his American Families Plan, which includes an expanded child tax credit and funding for preschool and community college. He detailed the plan April 28, and the budget will be released Friday. White House spokespeople didn’t immediately comment.

Congress must still approve any rate changes and retroactive effective dates, and there is already wariness about the full capital-gains tax plan building among some congressional Democrats.

But the tax money won’t be able to pay for everything. So that means we have to borrow!

So all the spending and borrowing will put us at levels we have not seen since World War II. From The New York Times (emphasis mine):

Mr. Biden’s plan to fund his agenda by raising taxes on corporations and high earners would begin to shrink budget deficits in the 2030s. Administration officials have said the jobs and families plans would be fully offset by tax increases over the course of 15 years, which the budget request backs up.

In the meantime, the United States would run significant deficits as it borrows money to finance his plans. Under Mr. Biden’s proposal, the federal budget deficit would hit $1.8 trillion in 2022, even as the economy rebounds from the pandemic recession to grow at what the administration predicts would be its fastest annual pace since the early 1980s. It would recede slightly in the following years before growing again to nearly $1.6 trillion by 2031.

Total debt held by the public would more than exceed the annual value of economic output, rising to 117 percent of the size of the economy in 2031. By 2024, debt as a share of the economy would rise to its highest level in American history, eclipsing its World War II-era record.

The levels of taxation and spending in Mr. Biden’s plans would expand the federal fiscal footprint to levels rarely seen in the postwar era, to fund investments that his administration says are crucial to keeping America competitive. That includes money for roads, water pipes, broadband internet, electric vehicle charging stations and advanced manufacturing research. It also envisions funding for affordable child care, universal prekindergarten, a national paid leave program and a host of other initiatives. Spending on national defense would also grow, though it would decline as a share of the economy.

The New York Times said the budget “suggests Mr. Biden will not propose major additional policies in the budget, or that his budget will flesh plans that the administration has thus far declined to detail.” The documents do not include anything about the unemployment insurance program, money for a public option for health care, or support to lower the Medicare age to 60.

Who knows what else he’ll propose this year.

It’s nothing but big government (again, emphasis mine):

If Mr. Biden’s plans were enacted, the government would spend what amounts to nearly a quarter of the nation’s total economic output every year over the course of the next decade. It would collect tax revenues equal to just under one fifth of the total economy.

In each year of Mr. Biden’s budget, the government would spend more as a share of the economy than all but two years since World War II: 2020 and 2021, which were marked by trillions of dollars in federal spending to help people and businesses endure the pandemic-induced recession. By 2028, when Mr. Biden could be finishing a second term in office, the government would be collecting more tax revenue as a share of the economy than almost any point in modern statistical history; the only other comparable period was the end of President Bill Clinton’s second term, when the economy was roaring and the budget was in surplus.

So you know they’re going to have to raise taxes in other tax brackets.

Biden and his team predict his plan will grow the economy by 2% by 2030, and unemployment will remain below 4% during that time as well.

The budget was never in surplus during Clinton’s administration. Yes, if you use cash accounting, more money came in than went out. If you used accrual accounting, which is the honest way to do it, you would have been in deep red. Cash accounting is popular with Ponzi plans. You take a lot in, send some out, and incur massive future obligations. At some point, the party is over. The government should be forced to keep accrual books. Anything less is dishonest.

Oh stop worrying, The government keeps all the money for future obligations in a lock box. Al Gore pointed that out decades ago. And they are not spending money. They are investing in America’s future, for Pete’s sake. I mean, there’s no safer investment in the world than US Treasury bonds, so it only makes sense the US government invests in them, too. The more they buy, the more wealth we will have stored up and safely tucked away in that lock box. They can bring those bonds out and sell them anytime they want. But why would they? Safest investment in the universe. I cannot believe you have no faith in America and deny the American people the investment they need to ensure their future prosperity. Such unbridled anti-Americanism deserves nothing less than full cancellation, so be ware. You are being watched.

I think we are already in hyper inflation. Lumber is up 4 fold, so I thought ok, I will use steel framing, well it is way up also. About $7 for a 25 gauge stud.

There have been steady price increase over the past year, far in excess of normal inflation. Part of the price increase was an end to most sales. For decades I have used sales, especially no limit sales to cut costs to 1/3 to 1/2. Much of that was seasonal, and I bought a years worth of product at a time.

Printing money out of thin air has drastic cost and consequences.

A quadrillion here, a quadrillion there, and pretty soon you’re talking about real money!

“We can’t be overdrawn, dear, I still have lots more checks in the checkbook!”

“Printing money out of thin air has drastic cost and consequences.”

Yeah, we’ve printed so much we are going to deplete the oxygen supply by 2026.

I love how my patience, self-discipline, and hard work will be rewarded by literally giving away all of that value to a bunch of snowflakes that have the collective patience of a fruit fly and feel entitled to everything right away.

Biden and his team predict his plan will grow the economy by 2% by 2030, and unemployment will remain below 4% during that time as well.

Good luck with that, economic growth of 2% in unacceptable, unemployment was under 4% because the regulations on business was scaled back, manufacturing was returning due to a change in the tax code.
Good luck getting the unemployment rate down when the country is flooded with additional labor with minimal high level skills that are needed the most.
You will also have additional money being sent back to the home countries of the immigrants that won’t be recirculated back in the US economy. It will either be sent to the family in the homeland or to pay off the human traffickers who got them to the border. We will be paying for multiple decades the cost of the flood of immigrants in 2021.

Any specific advise would be appreciated.

It’s not just being released on a Friday, but the Friday of a long weekend, and one in which Americans will be very keen to be out enjoying themselves. They really don’t want the general public to notice this.

Presidential budgets usually get released on Tuesdays or Wednesdays.