CCP social media accounts post meme “comparing the exhaust of a Chinese space shuttle to the flames of India’s thousands of funeral pyres.” 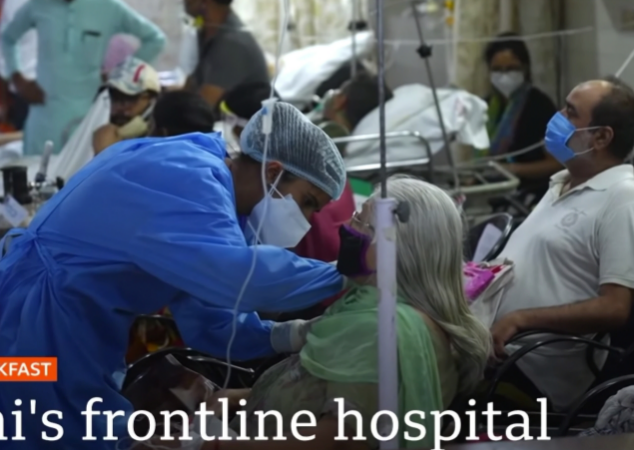 The official Chinese social media accounts are reportedly mocking India over the surging death toll and upheaval caused by the resurgence of the Wuhan coronavirus.

India is currently in the grip of the second wave of the Wuhan virus. The authorities reported 401,993 new cases on Saturday, which is the highest ever daily count globally. The country has close to 3.5 million active COVID cases. The outbreak of the virus, which first surfaced in central China, has taken more than 222,000 lives in India.

The recent posts praised Beijing’s handling of the pandemic while gloating over Indian deaths. Social media handles affiliated with the Chinese Communist Party posted images “comparing the exhaust of a Chinese space shuttle to the flames of India’s thousands of funeral pyres,” the Australian Broadcasting Corporation reported Monday.

A social media post by a Chinese Communist Party organ that mocked India’s Covid-19 death toll was deleted after it triggered an intense backlash at home and abroad.

As India continues to grapple with massive surges of Covid-19 cases, Beijing has sought to project the image of a benevolent power abroad, but such efforts have been undermined by agencies that have tried to take advantage of the situation to pump up nationalist sentiment at home.

The Ministry of Public Security, which has 31 million followers on Weibo, also posted a similar message on Friday comparing the image of an emergency hospital in Wuhan named Huoshenshan (which means fire god mountain), with a photo of a mass cremation ground in India. That post has also been deleted.

The outrageous Chinese official posts come against the backdrop of growing military hostilities between the two countries. Last May, the Chinese military attacked India along the shared Himalayan border and occupied a strategic valley in the Kashmir region.

China has told India to reverse “pro-US diplomacy” in the wake of the Wuhan virus resurgence. “India should reflect on the course of its pro-US diplomacy over the years. It ought to rethink its return to strategic autonomy,” the Chinese Communist Party-run newspaper Global Times wrote in its last week’s editorial.

China is angered by India’s growing defense and geostrategic ties with the United States. Under former President Donald Trump’s watch, India deepened its participation in the U.S.-led Asia Pacific alliance, also known as the Quad. Beijing considers it an ‘Indo-Pacific NATO,’ akin to the Western coalition forged to contain the Soviet-Communist expansionism after WWII.

The despicable social media posts are part of China’s newly unleashed propaganda and smear campaign against perceived foes. Last week, the Chinese embassy in Tokyo posted an anti-American and antisemitic meme. The diplomatic mission tweeted an image showing the Grim Reaper dressed in the Stars and Stripes and holding the scythe with the Star of David on it.

Secretary of State went on “60 Minutes” on Sunday and finally said that China is the primary threat.

Duh, Trump said that 3 years ago while every Progressive was pushing the Russia Hoax.

Mark Steyn calls him “Shagwell”… as to how well… well…. only Bang-Bang knows for sure-for sure.

But will not “contain” China’s expansion. Taiwan=Sudetenland

Yes, a wicked sense of humor. From Great Leap to one-child to selective-child, a progressive philosophy and practice makes perfect.

Beijing Biden has already angered the Indians by not selling them the raw materials they needed to make the vaccine themselves. He now claims he is there to help after the fact.

Biden will kowtow to the Chinese as usual, and destroy all ties with the largest democracy in the world in favor of the largest Communist country.

The political polarization will soon impact diplomatic relation (if it hasn’t already). Countries can no longer trust that he USA will be consistent in foreign relations Every new president brings a radical shift from one direction to the next. Mideast is a great example. We are again Iran, then for Iran, against, and then for. Back and forth. All the Arabs and the Israeli’s are getting whiplash from these changes.

Same happening around the globe – though not as dramatic as in the Mideast.

Strong diplomatic relations require consistency. China and Russia are consistent. USA is all over the place and unreliable.

So what are you saying? That Trump was wrong to reverse the horrible 0bama policies?! Because that’s what it sounds like you’re saying.

I think he’s pointing out that the Dems quest to divide us over every possible wedge issue they can conjure up domestically is having big foreign policy ramifications.

Yeah, I guess we just let the regressive, tyrannical deep state apparatchiks decide what our foreign policy should be. Shrug.

The Wuhan was developed for and targeted at the US and Europe. The Chinese Commies view any devastation it causes in India as a bonus.

One day soon we India will find out how and when China introduced to that country their latest covid variant.

Here is a good analysis, including the scientific detail, of how the Wuhan virus most likely escaped from a lab.
https://nicholaswade.medium.com/origin-of-covid-following-the-clues-6f03564c038