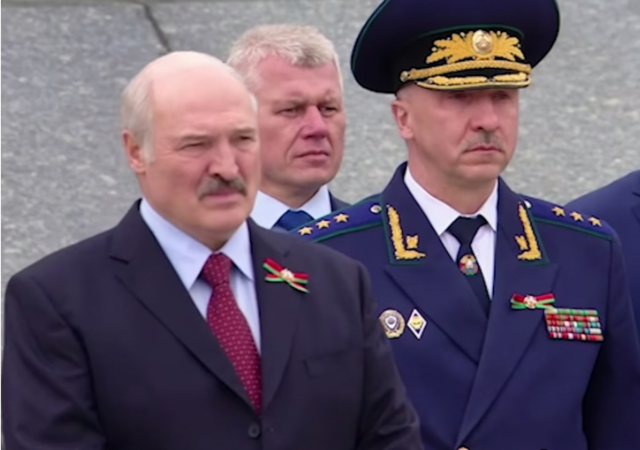 The former Soviet republic of Belarus is accused of ” hijacking” a European passenger liner to arrest a dissident journalist.

On Sunday, the Belarusian air force compelled a flight from Greece to Lithuania to land in its capital city of Minsk to arrest Roman Protasevich, a pro-democracy activist living in exile.

The wanted dissident “was on a flight from Greece which was rerouted to Minsk on Sunday over a supposed bomb threat,” the BBC reported. He is expected to face torture and a long prison sentence, news reports suggest.

The operation was executed by the Belarusian security service KGB. “Ryanair’s chief executive has said he believes that agents of the Belarusian KGB were travelling on the plane,” the UK newspaper Guardian reported.

The 26-year old journalist and blogger angered the Belarusian regime by posting the footage of pro-democracy protests triggered after the August 2020 election. Nationwide protests erupted after the country’s de facto dictator Alexander Lukashenko declared himself the winner of the presidential election for the sixth time in a row amid allegations of widespread voting fraud.

Lukashenko, a close ally of neighboring Russia, is working with President Putin to merge Belarus with Russia to create the so-called Russian-Belarus Union State.

The Associated Press on Monday reported the incident:

A prominent opponent of Belarus’ authoritarian president was arrested Sunday after the airliner in which he was traveling was diverted to the country after a bomb threat, in what the opposition and Western officials denounced as a hijacking operation by the government.

Raman Pratasevich, who faces charges that could bring 15 years in prison, was aboard the Ryanair flight from Athens, Greece, to the Lithuanian capital of Vilnius when it changed course to head for Minsk. (…)

Flight tracker sites indicated the plane was about 10 kilometers (six miles) from the Lithuanian border when it was diverted. There were conflicting accounts of the move.

The press service of Belarusian President Alexander Lukashenko said the president himself ordered that a MiG-29 fighter jet accompany the airliner after he was informed of the bomb threat. Deputy air force commander Andrei Gurtsevich said the plane’s crew made the decision to land in Minsk.

The arrest of the prominent dissident is expected to widen the growing rift between the Russian ally Belarus and the West.

Several European airlines announced on Tuesday that they are suspending flights over Belarus after Minsk forced a Ryanair jet to land to arrest a dissident journalist.

European Union leaders had urged airlines to avoid Belarus’ airspace as they imposed sanctions against the government of longtime leader Alexander Lukashenko.

Western leaders accused Belarusian authorities of hijacking the passenger plane during its flight on Sunday, while Minsk claimed it was trying to secure the jet after receiving a bomb threat. (…)

The EU has since banned Belarusian carriers from flying over the bloc’s airspace. The bloc also called for the release of Pratasevich.

NATO Secretary-General Jens Stoltenberg welcomed the EU sanctions, adding that the “forced landing of a passenger flight by Belarus was dangerous.” (…)

The Belarusian regime could not have carried out the provocative action without the tacit support from Moscow.

With plans for a Russian-Belarus Union State in progress, the tiny country is firmly in Moscow’s sphere of influence. “Our teams are continuing to work to develop the legislation for the union state,” Putin said in late April after meeting his Belarussian counterpart. “We are actively moving forward in union programs,” Lukashenko responded.

The incident comes as Europe is increasing its energy dependence on Moscow. Germany and Russia are close to completing the Nordstream 2 pipeline that will allow a direct supply of Russian gas to central Europe.

Former U.S. President Donald Trump had been opposed to the gas pipeline, calling Germany “captive” to the Kremlin in light of the project. However, Biden appears to be reversing that policy, waiving key sanctions on the Russo-German pipeline. Last week, the announcement was made ahead of the next month’s bilateral summit between President Biden and Putin in Geneva, Switzerland.

A reminder that at the moment of diversion, the airplane was closer to Vilnius than to Minsk. If the claim was that there was a bomb on board and the plane therefore had to land as quickly as possible, the proper course of action would have been to land at Vilnius.

Of course, the Belarus MiG-29 fighter on the tail of the airliner rather emphasized that the government wanted the plane in Minsk. A real question to ponder is whether, if the airliner pilot had replied, “no, we’re going to Vilnius”, whether the MiG pilot would have pulled the trigger (my answer: yes).

Other than some mewling and a few sanction, Belarus will get away with this.

They shot down a hot air balloon which was in a race as it strayed into their territory. So..yes… They would have. Their are more Soviet than the old USSR.

One point. Would you fly on a plane directly flying over your avowed enemy’s airspace? After the shoot down over Ukraine, the neighborhoods around Russia are dangerous.

Belarus had a fake election last year, it still has a Soviet-style economy and it is still brutal against dissenters.

Sure y0u’re not talking about the United States?

I’m picturing this theoretical conversation between the airliner pilot and the fighter.
Fighter – You need to land in Minsk at once or the plane will explode.
Airliner – How do you know?
Fighter – I can guarantee it
Airliner – I’ve always wanted to visit Minsk. Changing course.

Question: In what countries is questioning the integrity of a national election considered ‘dangerous extremist’ activity that the government must suppress?

Answer: Belarus and the United States of America*.

* Applies only if a Democrat was declared the winner. If a Republican happens to have won questioning the integrity of the election is one of the highest forms of patriotism possible.

As Glenn Greenwald has pointed out, the US isn’t in a great position to criticize Belarus over this incident, in as much as the US did something very similar (but arguably even worse) several years ago, getting allies to close airspace in order to force a plane containing the Ecuadorean head of state to land in an effort to “kidnap” Edward Snowden, whom the CIA (incorrectly) believed was on the plane.

Let’s all thank the CIA for its competence.

Bolivian, rather than Ecuadorian. Evo Morales, forced to land in Austria.

….yet they continue their doe-eyed march into the grasp of the communist wolf

How far is the US from doing this? Keep in mind BUYden is going to set on Putin’s lap in the near future and not a word about collusions.

As mentioned above, the US isn’t far from doing it, we’ve already pressured other countries to do it before.

It would not even occur to Biden officials — just for the sake of appearances if nothing else — to try to find someone to do this other than the same person who, in 2013, obfuscated and defended the actions of the U.S. and E.U. in doing the same thing to Bolivia’s presidential plane.

Putin won’t let Biden* sit on his lap… he’s afraid Joe’s diaper will leak. But he will give him a lollypop to suck on.

I was in Belarus for several weeks about 6-7 years ago. I would not go back. It’s as if the Soviet communist empire never foundered in Belarus.

Legally speaking, it’s an act of war (though camouflaged). A country would be well within its rights to drop a few bombs on Vilnius or drive a few thousand troops across its border. It might not be the politic thing to do, but it wouldn’t be wrong.

And no, it isn’t the same as convincing some countries to deny overflight rights. That’s well within their legal jurisdiction to do. (I’ve personally experienced missions diverted because someone didn’t get the “Dip clearance” in time or it was revoked.)