IfNotNow has deleted the original tweet after blowback, but it doubled down by retweeting support for “incredible, inspiring images of Palestinian resistance” 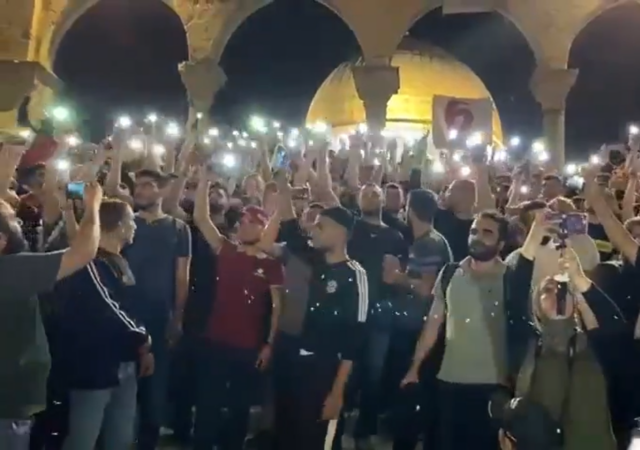 This past weekend, Palestinian Arabs in Jerusalem marked the conclusion of Ramadan with vast gatherings at the Temple Mount (the world’s holiest site for Jews and third-holiest site for Muslims), where incendiary video footage showed the crowds enthusiastically chanting hateful slogans preaching violence against Jews. Naturally, the so-called “Jewish” anti-Zionist organization IfNotNow publicly endorsed the incitement—and claimed to do so on behalf of American Jews. 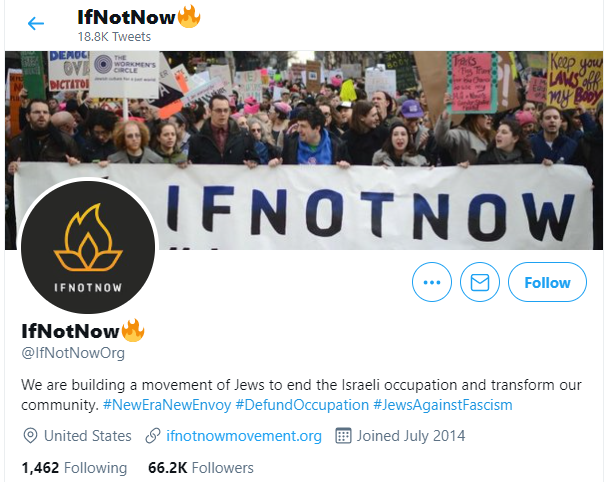 Founded in 2014, ostensibly in response to Operation Protective Edge (the third Hamas-Israel war), IfNotNow (INN) identifies itself as a “movement” of “young Jews” who were “moved to act by moral anguish” in response to the fighting in Gaza. Of course, as we’ve illustrated before, “young Jews” can mean anything from “actual Jews, however gullible and ignorant of their own history” to “Islamist activists”; “moved to act” generally means “moved to blame Israelis and Jews for nearly everything that has ever gone wrong for any Palestinian Arab ever”; and “by moral anguish” usually translates to “by an overwhelming and narcissistic impulse to find favor—whatever the cost—with adversarial forces that ultimately seek to reduce all Jews to a subjugated minority anyway.”

Regular readers might remember INN from our earlier coverage, including:

Much like Jewish Voice for Peace—another oft-covered anti-Zionist group of fringe Jews and their allies—INN provides a useful cover for non-Jewish anti-Zionists; by gleefully trumpeting their own Jewishness as justification and even motivation behind their obsessive castigation of Israel, INN members enable anti-Semites masquerading as “pro-Palestinian” “human rights activists” to maintain a façade of fair-minded moral superiority.

But during this past weekend’s Ramadan protests, INN’s characteristic ignorance of the facts on the ground (yet again) revealed its hypocrisy and disregard for the Jewish communities it claims to champion and represent.

In its latest public faux pas, INN promoted a May 8th, 2021 video clip of Palestinian Arabs chanting in unison at the Temple Mount in celebration at the end of Ramadan. The clip, shared previously by a reporter at the Qatari-owned and virulently anti-Israel network Al Jazeera, showed hundreds of Palestinian men raising their illuminated cell-phones in the air and chanting responsively in Arabic, “Strike, strike Tel Aviv!” and “With blood and spirit, we’ll liberate you, Al Aqsa!” (You can see the reporter’s original tweet and video here or below.)

Thousands of Palestinians in 48 made their way to Jerusalem, were initially stopped by Israeli police so many of them decided to walk. Others forced the roads open خاوة pic.twitter.com/ba1TNF1vrv

INN, inadvertently revealing that none of its staff have even a rudimentary grasp of Arabic (this would not be surprising, given that they don’t seem to speak or read a lick of Hebrew, either) retweeted the reporter’s post, calling the Palestinians’ incitement to violence “incredible, inspiring images of Palestinian resistance”.

As if to further emphasize its own detachment from reality, INN also purported to speak for American Jewry at large, declaring to the hateful crowd, “American Jews are with you”. 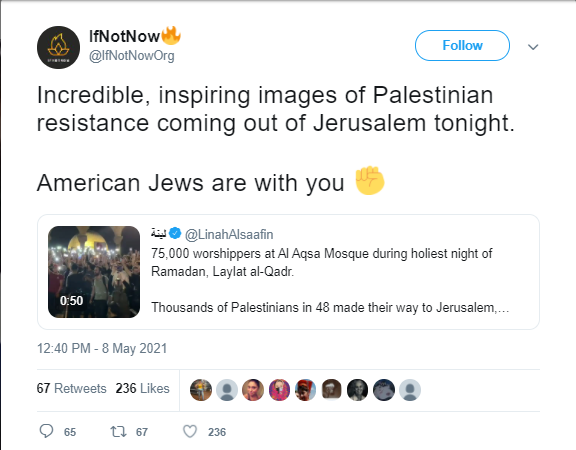 The response to INN’s tweet was overwhelmingly negative, with many Jews weighing in to clarify that, no, we most certainly do not stand with those who’d like to murder and otherwise ethnically cleanse us from Jerusalem (where the Al Aqsa mosque is located). Many also offered English translations that INN evidently did not bother to obtain beforehand. 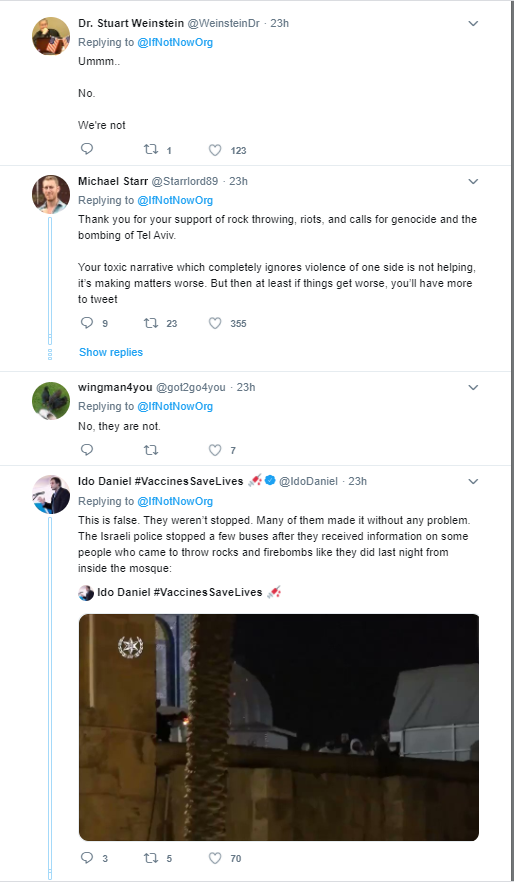 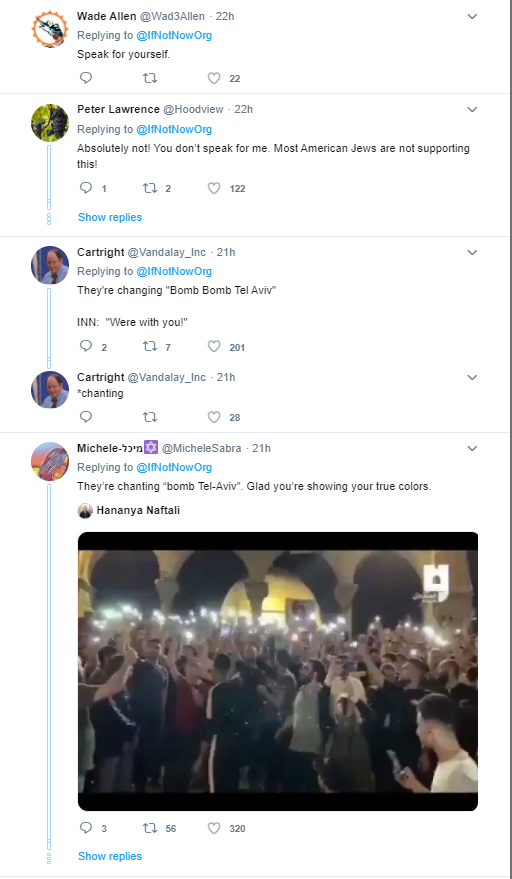 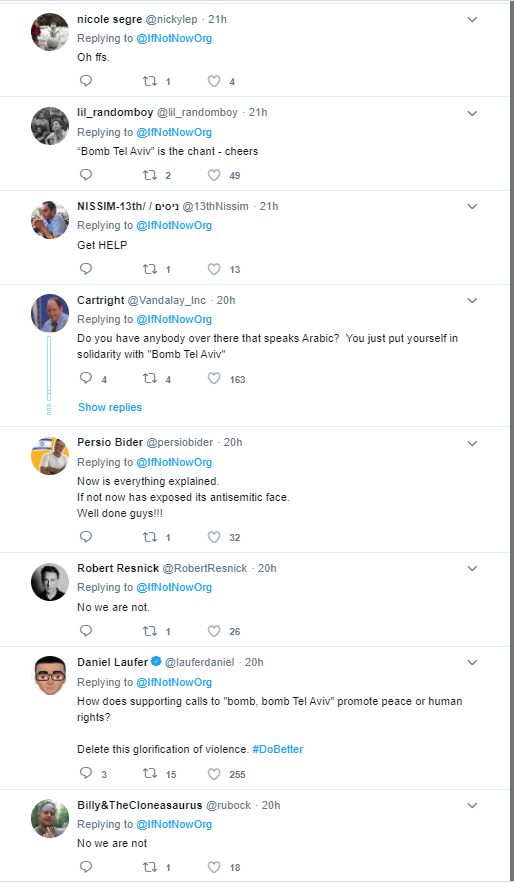 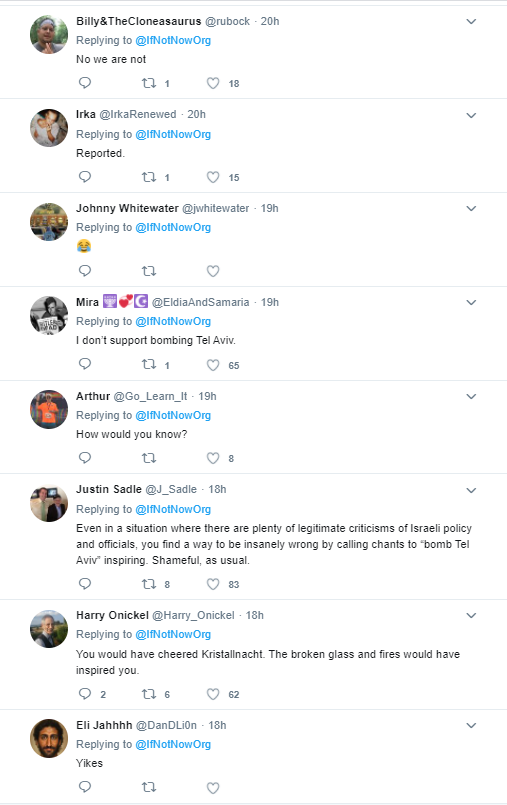 Finally, in an attempt to save face, INN deleted the tweet completely. But instead of then offering a contrite apology, INN followed its usual M.O.: exploiting Jewishness by insincerely performing familial Jewish attachment to Israel while undermining the safety of Israeli Jews; deflecting blame by accusing the rightly outraged of spreading “propagand[a]” with malicious intent; and doubling-down on its own propaganda, meant to infantilize and exonerate Palestinian Arabs of all behaviors that retard peace or their own success. 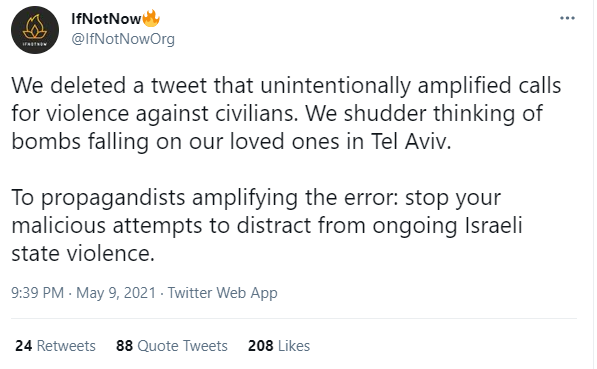 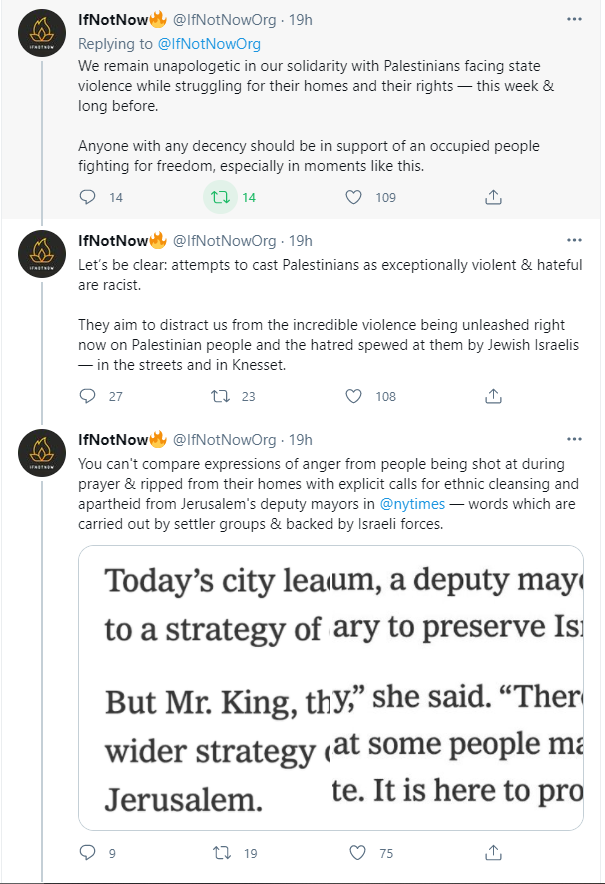 So much for being #JewsAgainstFascism, INN.

Question-How stupid do these groups think we are?

Are they correct? Will we believe them expressing their views was “unintentional”?

deflecting blame by accusing the rightly outraged of spreading “propagand[a]” with malicious intent;

No, that was actually directed at propagandists on their side. They characterize the Arab calls for genocide as an “error”, they apologized for “amplifying the error” (i.e. retweeting the video that shows the Arabs’ true face), and they called on propagandists on their own side to follow their example and stop “amplifying” it, i.e. to bury it and pretend it didn’t happen. At the same time they excuse the “error” as understandable given the terrible violence the Arabs are suffering at the Jooos’ hands. They regard it as wrong, but an unfortunate natural reaction to be covered over, not condemned. Smarmy gits.

I’m so sick of these vile Dhimmi-crats attempting to rationalize and justify their enabling, whitewashing and endorsement of Islamic supremacism, totalitarianism and Jew-hate. These reprobates ignore the ideology of “Submission’s” glaring and intrinsic pathologies and gleefully promote the utterly contrived and fallacious narrative of alleged Arab Muslim, so-called “Palestinian” victimhood. The Dhimmi-crats are evil.

How can smart people be so dumb ? We have the same issue in the USA. White liberals think it’s chic and fashionable to be Marxist. They would be he first one’s killed if the Marxists take power.

It is never Racism as long as the hate is directed towards Whites and Jews.

I honestly don’t understand these folks. I am not Jewish, raised as a protestant Christian. My adult view of religion has made me basically Deist.

I spent nearly five years cumulatively in Muslim countries in the Army. I was training and fighting alongside Muslims. Had daily interactions with them trying to figure out what cultural buttons to push and which to avoid. This doesn’t include the shelf of books about Arab culture in general, specific countries cultures and the subcultures of the various tribes and groups we were assigned to.

I have never been to Israel. I have read a great deal about the pre-founding era under British mandate, the founding era and the subsequent wars through today. I pay attention to any news reports about Israeli current events.

My knowledge is far from complete. If I with limited direct knowledge and personal experience in Israel understand the absurdity of the ‘Palestinian’ how can those with supposedly more knowledge and resonance with Israel be so misguided?

The d/progressive American Jews who support the bs propaganda the ‘Palestinians’ are slinging have, IMO, either decided to remain willfully ignorant or have simply actively embraced the propaganda despite their knowledge that it is bs.

Serious question. Why do they do so? Is it really about blue check twitter hugs and kisses?

As a deist, you may not find this helpful, but …

The God of Abraham, Isaac, and Jacob has chosen the nation of Israel to proclaim his glory through his fulfillment of his promises. Those of any people group, including Israel, who reject his sovereignty devolve into hatred and wickedness.

have in-laws in tel aviv–about 30nms from jerusalem–roughly 60 seconds away from the capitol as the missle flies–they have been there since the late ’40’s, immigrating from europe at the war’s end–how they have endured the palestinian madness all these years is inspiring–has literally become part of the background of their lives–could not have dealt with it myself

I can appreciate that. It does not answer the question of why those who proclaim themselves to be Jewish would still adopt an anti Israeli stance.

Can it be as simple as social pressure in an echo chamber?

CC, I think this has something to do with it.

Luke 19:11-14
11 As they heard these things, he proceeded to tell a parable, because he was near to Jerusalem, and because they supposed that the kingdom of God was to appear immediately. 12 He said therefore, “A nobleman went into a far country to receive for himself a kingdom and then return. 13 Calling ten of his servants, he gave them ten minas, and said to them, ‘Engage in business until I come.’ 14 But his citizens hated him and sent a delegation after him, saying, ‘We do not want this man to reign over us.’