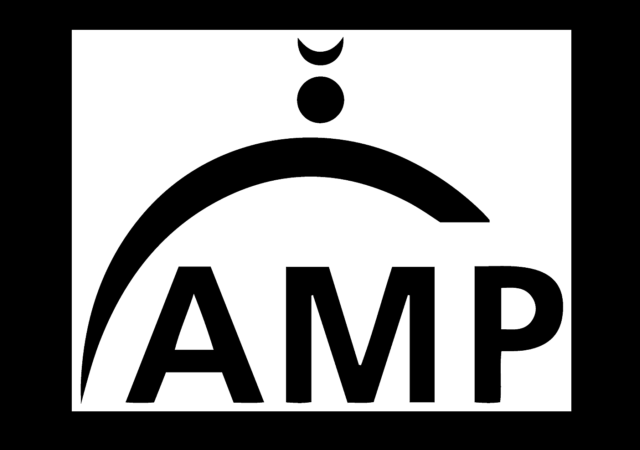 American Muslims for Palestine (AMP) has emerged as one of the most radical and controversial anti-Israel groups, with a far reach into campuses and anti-Zionist organizations. We have covered the role of AMP in numerous posts dating back several years.

AMP was involved in organizing protests and disruption of the Christians United for Israel Annual Summit in July 2019, which we covered in Investigation: Anti-Israel groups plan disruption of Christians United for Israel Annual Summit. That post has a section devoted to AMP’s origins and leadership, including its role in Students for Justice in Palestine. AMP also co-organized the U.S. Tour for Janna Jihad, Rewarding Palestinian child exploitation: Janna Jihad goes to Congress.

AMP also has been the subject of congressional testimony by Jonathan Schanzer of the Foundation for the Defense of Democracies, and reports by the ADL, NGO-Monitor, and Canary Mission.

The Washington Free Beacon is one of our favorite websites, with a long history of investigative journalism. So the Legal Insurrection Foundation was pleased to join with the Free Beacon in an investigation of the role AMP plays as a connector among various anti-Israel groups. 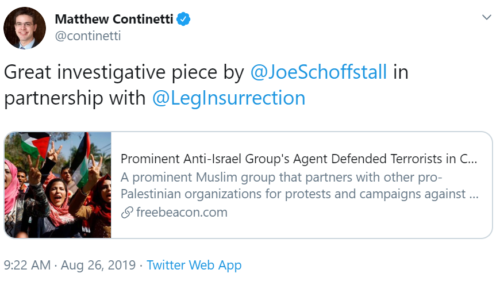 Here’s an excerpt from the Free Beacon story by Joe Schoffstall, to which LIF’s Samantha Mandeles contributed. Click over to read the whole thing.

American Muslims for Palestine has been active in recent anti-Israel demonstrations and campaigns in the United States alongside other far-left, pro-Palestinian groups.

In 2017, AMP began organizing with IfNotNow (INN), a group that regularly accuses Israel of crimes in the Palestinian territories. Max Berger, a cofounder of IfNotNow who is now the director for progressive partnerships for Sen. Elizabeth Warren’s 2020 presidential campaign, previously tweeted that he would “totally be friends with Hamas.”

AMP and INN together disrupted the Senate confirmation hearing for David Friedman, the United States ambassador to Israel, in early 2017. Thomas Corcoran, an INN activist, recalled the disruption one year later and referenced Taher Herzallah, the associate director of outreach and grassroots organizing for AMP. “Thank you IfNotNow, American Muslims for Palestine, CODEPINK: Women for Peace, and all of the other powerful movements and leaders that are in this fight,” Corcoran wrote.

AMP and INN, along with other pro-Palestinian organizations, also came to the defense of freshman representatives Ilhan Omar (D., Minn.) and Rashida Tlaib (D., Mich.) as they came under fire for anti-Semitic remarks.

Members of AMP and INN co-signed a letter with a long list of other far-left leaders in April standing “in solidarity” with Omar and “firmly against the rise of Islamophobic attacks and attempts to divide us as a people.” The letter blamed “white supremacy, discrimination, bigotry, and hateful expressions against immigrants, refugees, people of color, and communities of faith” for the attacks against Omar.

Tlaib met with members of AMP in April and was photographed with Joe Catron, who has openly shown support for terrorist organizations. “A tip of my hat to Rashida Tlaib, who really goes above and beyond the call of duty in welcoming every supporter of Palestine to her office, listening to what we have to say, answering our questions, and posing for endless pictures,” Catron wrote following the meeting.

Samantha Mandeles of Legal Insurrection Foundation contributed to this report. 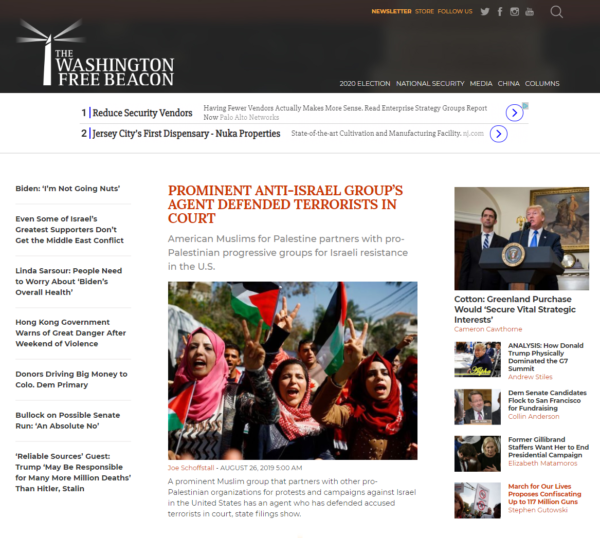 Samantha will have follow up posts on the investigation in the coming days and weeks.

Good to know. I wouldn’t be at all surprised to find it woven in with cair, muslim brotherhood, isna, msa, etc.

I agree, CAIR has a long history of of sleazy activity, and they are closely associated with IAP which is a front for Hamas.

Another terrorist group under cover!

Like unicorns, neither one exists. Neither do Muslim British, or Muslim Canadians, or Muslim French, and so forth. So maybe they have in hand all the paperwork of superficial citizenship, but all of that would have been falsely, fraudulently, obtained through lying. They have no allegiance to America.

We’re so onto their game of stealing the good name of “Americans” for exploitation in the cause of their Allah and their Islam.

Muslims prove this point over and over again. And they state it over and over as well. Namely, that they are loyal only to Islam, and to nothing else. Affirmed by the Orlando shooter, by the Fort Hood murderer, by the Boston Bombers, by the Paris Bombers, by the 911 hijackers, the countless murders by Muslims in Europe (Lee Rigby, Charlie Hebdo, Bataclan, Nice, et alia) and on and on. Explaining why Muslims can never be trusted and never be considered loyal Americans, British, Canadians, French, Italian, Australian, and so forth. They represent an enemy living among us.

Here in America, as elsewhere, Muslims are out for colonization and conquest. They cannot be considered Americans because of their adoption of Islam, and their wish to impose it on us. By force, since they will follow their 1400-year practice, should we decline their we-won’t-be-taking-no-for-an-answer “offer” to adopt Islam. Shariah (total government) and American constitutional principles (government contained/controlled by the people) couldn’t be farther apart. To the Muslim no man-made law could ever be superior to their Shariah considered by them to come directly from their Allah.

Is it possible to conceive of a Muslim American? No way. At best and at most they can only be described as “Muslims who live in North America,” but they are not Americans in the heart, where it counts. I’m gladdened to see more and more real Americans are seeing Muslims for the danger that they are.

“The AJP Educational Foundation reported $790,000 in contributions on the tax documents, which does not disclose its donors.”

Great to see LI teaming up with WFB!

I’ve been thinking/saying for years now that it’s long past due for the most prominent and successful old hand conservative bloggers to start joining forces and pooling their resources (and finding investors) and head in the direction of becoming full-blown media/journalistic enterprises.

The time has come for the next logical stage; creating original content and doing investigative journalism.

Time to let a new generation become the conservative bloggers and fill the blogging void left by LI, Instapundit, Powerline, etc., as these longtime established bloggers who’ve paid their dues create a new conservative media whole greater than the sum of its parts. Let a new generation of conservative bloggers react and critique the leftist MSM. Let these young bloggers serve as news portals and aggregators. But the old fellas have to start becoming full-fledged media operations on the level of CNN or MSNBC.

I meant to add, but I forgot: I’ve seen Instapundit’s Professor Reynolds on a number of occasions call on conservatives with deep pockets to buy women’s magazines since virtually all of them—-innocuous as they try to seem—-are now platforms for Democratic talking points.

I still agree with this … but I think what I just talked about should take precedence.