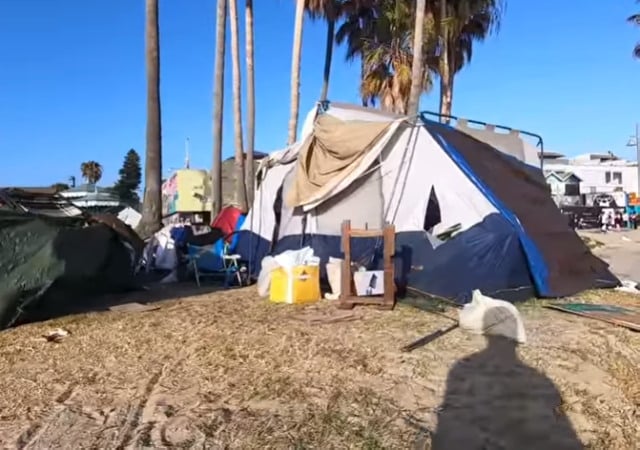 The high cost of living and strict COVID policies are not the only reasons that California’s population is shrinking. The state has a massive homeless problem.

The famous neighborhood of Venice Beach has been overrun by homeless camps and the crime that comes with them.

Residents are outraged, and who can blame them?

Residents in Los Angeles’ coastal Venice neighborhood are calling for action over homeless encampments in the area that have been connected to a string of crimes, including shootings, fights, fires and drug use.

The city as a whole is grappling with a homeless crisis that has only gotten worse in recent years. Over five years, the homeless population has increased by half, according to a January report released by the Luskin Center for History and Policy at the University of California in Los Angeles.

In Venice, some of the more violent incidents alarming residents and business owners include an April 28 shooting in which a man was shot but survived. No suspects have been identified, the Los Angeles Police Department told Fox News. Another includes a Monday explosion inside an encampment that caused a fire.

The incidents are the latest of several chaotic events that have prompted concern from residents over the expansion of homeless encampments along the city’s famous boardwalk – Ocean Front Walk – and elsewhere in a neighborhood known for its beach and canals, which draw visitors from all over the region…

Updated crime statistics provided by the Los Angeles Police Department to the council, which shared them with Fox News, show violent crime robberies in the neighborhood up 177% and a 162% increase in cases of assault with a deadly weapon involving a homeless person.

These videos are shocking. STRONG language and violence warning:

@KristySwansonXO Ya it’s sad and it sucks. The fact others are ridiculing you over this is pathetic and they’re part of the problem. RT @BoardwalkVenice: Venice Beach Boardwalk comparison – Wednesday Sept. 9, 2020 7:15pm vs. Wednesday April 21, 2021 7:15pm pic.twitter.com/G8IV70GcYc

This video describes Venice Beach as the new Skid Row:

Residents in Venice continue to voice their frustration over growing homeless encampments in the area they say are becoming increasingly dangerous.

Eyewitness News obtained video of a homeless man being shot last week on the Venice Boardwalk, which also shows the shooter walk away while the victim moans in pain. The victim remains in the hospital in stable condition, and is not cooperating with police.

Los Angeles police doesn’t know who or where the gunman may be.

The shooting took place at nearly the same spot where someone set fire to a tent. In that incident from earlier this week, video shows a small fiery explosion that ripped through a tent at an encampment. Bystanders were able to put the fire out with sand before firefighters arrived.

Residents say they are the latest in a series of chaotic incidents that include fights and other fires.

Gavin Newsom shouldn’t even wait for the recall election. He should resign in shame. Same goes for Los Angeles Mayor Eric Garcetti. This is a national embarrassment.

Honestly don’t care. These same Venice Beach residents keep electing idiots to run their city. The idiots put in stupid policies that don’t work, prevent law enforcement, code enforcement, and the health department from cleaning up these encampments and then the citizens still vote to reelect these idiots.

Los Angeles, Seattle, Portland, Detroit, Chicago, New York City all run by one party that screws everything up and the people keep putting that same party back in power every election.

Garbage In = Garbage Out

And it will get much worse with the BLM / Progressive Marxists in charge.

A judge ruled that the homeless can set up their tents anywhere on public property…such as sidewalks and the beach. Contrast this to trying the stay at the governors mansion or sleeping in state buildings in the past… the public has to endure… but the bureaucracy doesn’t.

The mnemonic is CATO for homeless people.

government aid can help only the last.

currently working up some GAFs about Death in Venice

I lived a half-block from Venice Beach for a few months in late 1984 and early 1985. There was riff-raff for sure, but subsequent visits showed decline, and sometime after 2010 I decided it would be my last visit to L.A., a city I’d frequently defended, mainly for its natural beauty.

So assaults and robberies have skyrocketed lately? Must be really bad there, because it had gotten bad long before ’20. What a mess.

the good news is that the City is expected to budget nearly $1 BILLION next FY, to “address” the problem… plus whatever the county and state spend.

funny thing though: every year they spend more money, and every year there are more vagrants here, yet they refuse to admit the connection.

the reality is that neither the bureaucrats nor the NGOs involved have any incentive to reduce the problem, as then there would be no need for them to exist.

and they keep insisting they will have this all resolved before the 2028 summer Olympics… yeah right.

>> Any yet homelessness gets worse every year.

When will Dems realize – not every problem is solved by throwing money at it.

Where I live, we send ’em to Portlandia, which loves their junkies.

The problem is that they keep getting more and more money to solve a problem. So what is their incentive to solve the problem? None that I can see.

They don’t solve problems, they MILK problems. Part of keeping the milk flowing is keeping the problems festering. I’m surprised that anyone who reads Legal Insurrection is still confused about this, chalking up to incompetence that which is better explained by malevolence.

And the corollary is that the problems become so bad that people are coerced to accept the extreme “solutions” that are the progressives end goal. We haven’t seen nothing yet.

Bet that they will continue to be angry….or move

Move is what we did several years ago, out of Seattle to a secure undisclosed location in Eastern WA. No one could have predicted 2020, but the (non-)respose by that city’s “leadership” didn’t surprise me one bit.

There were many slippery sloop warnings over the years but all were studiously ignored. My niece finally escaped when they outlawed her gig job.

I think my niece just bought a house, a block off the beach… SMH…

Oddly enough,, she was a rocket scientist.. or something like that.

The solution is obvious:
Mentally ill and/or addicted people need to be institutionalized, against their will if necessary, if they cannot function as civilized members of society. Living in a tent on the beach is not compatible with a civilized society, and should not be allowed.
Anyone who is not mentally ill or addicted, who wishes to camp out on the beach or any other public place, should be told to move on.
If they refuse, they should be arrested and their junk discarded in a landfill.

Johnny – that’s just logical thinking which the woke will reject as racist.

Agreed but these policies would also be weaponized against their political enemies, right out of the Soviet’s playbook.

Los Angeles elected hacks – er, officials – have thrown up their hands, citing a court decision that binds them from any action.

BUT….did never appeal the holding that they’re using as an excuse to do nothing?

Gooder, and harder, as deserved. It would take a heart of ice not to laugh, but I am LMAO

I thought Biden* already fixed the homeless problem, just as he single-handedly cured the Wuflu and the economy.

Biden didn’t fix it, but the good news is that we’ll be hearing a lot less about homelessness in the next 4 years (hopefully not longer) as his MSM sycophants will not report anything that makes him look like the inept, senile old fool that he is.

Oh there’s more: three murders in the last 4 months of elderly people walking down the boardwalk; a dog in a house firebombed and killed for barking. Read Venice Current and see the future envisioned by the Democrat party for everyone.

Socialism’s end stage. Totally don’t have any sympathy at all.

They don’t call it homeless anymore. They call it urban camping.

We live south of LAX. Venice Beach is north of LAX.

As soon as you get north of LAX in Westchester all the way past Santa Monica, it is like driving in a third-world country.

I have been to third-world countries. What is striking is the difference between the rich and poor. This is what is happening north of LAX.

People driving $1m cars past tent cities. Poor crapping on the sidewalk near $5M homes. All of the hallmarks of a third-world country.

My brother is a “packaged” leftie (I will explain below). He and my sis in law were at some auto museum or show or something in El Segundo recently. As they headed out to go back to I-10 and east to their home, they saw all of that. Even he was appalled.

“Packaged”. He repeats what he hears, and uses all the cliche words like bankster. In short, what some leftist talking head says on XM Progress in the morning, he mouths in the afternoon. Plenty of packaged righties as well in my experience.

That Auto Museum in El Segundo is fantastic.

I work there and my daughter goes to school there.

Outstanding place to live and raise a family, unlike the cities north of LAX.

People can no longer take a barefootwalk on the beech without getting a needle stab or two. And those stainless needs will not degrade.

Gee, I can’t imagine why California saw a declining population for the first time in its HISTORY.

We’ll probably never figure that one out.

Shithole by the Sea, now there’s a tag line!

LOL, they’ll keep voting Dum, regardless. You voted for it, now you’re gonna get it, good and hard.

You got what you should have known you would get. Next time, don’t vote for the Democrat. In the off chance that the Democrats decide not to control the vote counting, as they did in 2020, you might see things begin to improve.

Any other housing would be quickly shut down because of outdoor toilets. No doubt you can tell by the smell. Do they have garbage collection or running water??? Do they use ocean water to flush?? To where??