Totally not a coincidence her call comes days after emails showed her union pushed the CDC to keep the schools closed in the 2020-2021 academic year. 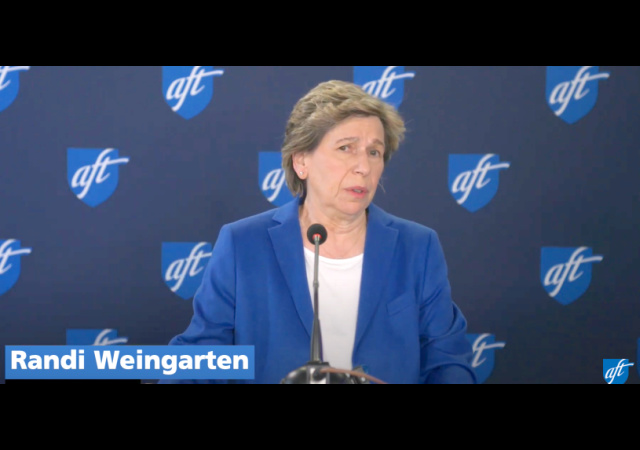 You all know I don’t believe in coincidences.

It cannot be a coincidence that the American Federation of Teachers (AFT) president Randi Weingarten pushed to reopen all schools in the fall days after emails showed AFT pushing the CDC to keep schools closed this school year.

I hope Weingarten doesn’t expect accolades and a pat on the back. From CBS News:

“The United States will not be fully back, until we are fully back in school. And my union is all in,” Weingarten said in a virtual address, announcing that the AFT would dedicate $5 million in a campaign to support reopening. She said that the pandemic had not only shown that in-person learning is how “kids learn best and that prolonged isolation is harmful,” but also “underscored how important educators are.”

Weingarten pushed back against the critics who have blamed teachers unions for school districts’ hesitancy to reopen, as unions have demanded certain safety measures. She said detractors were “ignoring the extreme disparities among schools and blaming teachers for problems outside their control.”

Weingarten argued that “conditions have changed,” with the main “game-changer” being COVID-19 vaccines. According to AFT data, 89% of members are fully vaccinated or want to be, Weingarten said.

Oh, yeah. Weingarten whined that people “scapegoated teachers and vilified their unions” over school closures. She once again claimed they kept schools closed because of safety and health issues.

Okay, lady. I did not get that vibe when I blogged about the teachers union in Chicago. How about the San Francisco teachers union and district agreeing to reopen just as time is about to run out to receive $12 million in public funds?

Considering private schools and some public schools in the nation opened in August or September 2020 without many problems the unions have no defense.

Too many kids lost out on a school year, which will likely affect their future.

How about opening this Summer to try and get a jump on fixing the mess waiting in the Fall?

If opening in the Fall is now safe and totes ok….doesn’t that also mean that the unspent Rona funds sent to schools to mitigate Rona spread such as reworking the HVAC duct systems ECT are no longer required?

Too late by far. The education union leadership Nationally and in many localities has revealed themselves as ideologues. They placed the welfare of their Students dead last in their list of priorities.

You can’t have both. If you’re open fully, then that means NO RESTRICTIONS–no mask mandates, no COVID testing, no social distancing, no vaccine requirements. THAT is what fully means–and you cannot guarantee the “safety” you are promising.

No body is buying her extortion and lies anymore.

THAT is what fully means–and you cannot guarantee the “safety” you are promising.

Your behind the times by several hours.
CDC as lifted the mask recommendation.
But aside that fact. Thousands of schools schools across the nation have been in person full time since August. Masks and separation. A huge data base that reinforces the science that youngsters are at extremely low risk of catching and spreading covid.
Inside that data set is another data set of schools that never required masks. Again no detrimental outcomes.

All of these data points are being ignored, and supplanted by wild guesses, paranoia, and politics.

Screw “regulating the teachers unions”. Eliminate the teachers unions and go back to teaching the basics of reading, writing, arithmetic, and science and I think you’ll find most of the problems encountered in public education will also be eliminated.

Great news! In the fall, parents will be able to send their children back to the government monopoly bureaucratic “public” indoctrination system!

Perhaps they should think twice before doing that.

This shrew should be sent to Alcatraz. Her union is America’s enemy.

I guess teachers’ contracts are expiring. If schools aren’t open, no need to re-hire them. That means union dues dry up. It isn’t about educating kids or looking out for the teachers, it’s about the money.

That means union dues dry up

Ahh, yes, union dues.
A little of topic, but a fun fact.

Back when Scott Walker was first elected Gov of Wisconsin, Republican controlled legislature went to work passing legislation and moving the agenda. It was great.
One item in one of the bills was a very innocuous line item that removed the requirement that public union union dues were deducted from payroll checks.
That simple move reduced union dues by over half, if memory serves.

This might be one of the lousiest public speeches I’ve seen in recent memory. I couldn’t do more than 5 minutes.