As more states drop mask mandates, comparing CDC data between states with mandates vs those without is very revealing. 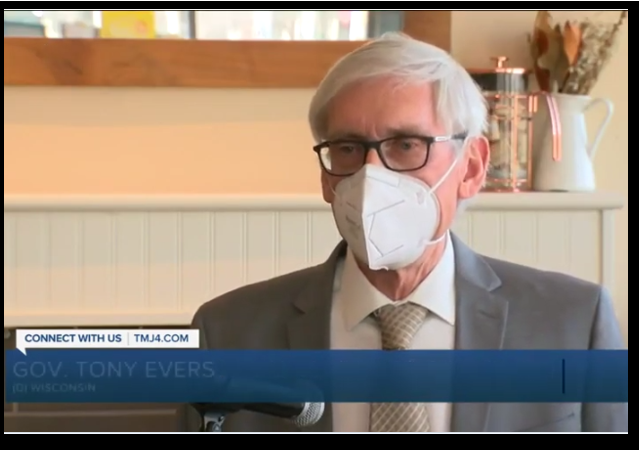 The conservative-leaning court ruled 4-3 that Evers violated state law by unilaterally issuing multiple emergency orders to extend the mandate for months. It found that Evers needed legislative approval to issue more orders after the expiration of the initial 60-day mandate he issued in August.

“The question in this case is not whether the governor acted wisely; it is whether he acted lawfully. We conclude he did not,” Justice Brian Hagedorn wrote for the majority.

The court ruled Evers exceeded his authority by issuing multiple emergency orders in response to what it said was effectively the same emergency.

The ruling bars the governor from issuing a new mask mandate as he did the last time it was tossed, by the Republican-led Legislature. The latest order was set to expire on Monday.

Local governments, such as cities and counties, are still free to impose their own virus restrictions, and Dane County’s mask mandate remains in place.

Meanwhile, the mask mandate is ending in Arkansas.

Gov. Asa Hutchinson announced that the mask mandate is officially ending in Arkansas as of Tuesday while also opening up vaccinations to nearly all remaining adults in the state.

With active cases dropping and hospitalizations far below levels the state was seeing on March 1, the mask mandate is ending. Hutchinson is still asking that Arkansans still respect the decisions of businesses and venues in the state that are still requiring masks.

Arkansas joins an expanding list of states that have dropped state-mandates, either allowing local rules only or discarding the restrictions entirely.

Several states, including Arkansas, Arizona, Iowa, Mississippi, Montana, Texas, Wisconsin and Wyoming have dropped their mask mandates in 2021, joining about a dozen other states that don’t have statewide mask requirements. Alabama, Indiana, Utah and Wisconsin will also end requirements in their states in the coming weeks.

I want to thank Legal Insurrection reader James Creigh for inspiring me to do a little data crunching on the states that ditched mandates in terms of infections.

Even taking into account underreporting from recent weeks, Iowa has not recorded any excess deaths and its deaths are actually below average since it ended its COVID restrictions nearly two months ago https://t.co/LsnP0WFhI6 pic.twitter.com/oELbVyCnLr

The graphic above comes from the Centers for Disease Control and Prevention.

Coronavirus cases have dropped to a record low in Texas roughly three weeks after the state lifted its mask mandate and reopened businesses.

“Today the 7-day Covid positivity rate dropped to a new recorded low: 4.95%. Hospitalizations dropped to a 6 month low. This week we have 1 million 1st vaccines available,” Texas Governor Greg Abbott wrote in a tweet on Sunday. “Everyone now qualifies for a shot. They are highly recommended to prevent getting Covid but always voluntary.”

How about Florida? While cases are on the rise (Spring Break), the number of deaths for the past 2 weeks have been below “excess”, with a caveat.

How about South Dakota, which never had a mask mandate? It looks like they are under the excess death curve for the past few weeks, after experiencing a holiday season spike. 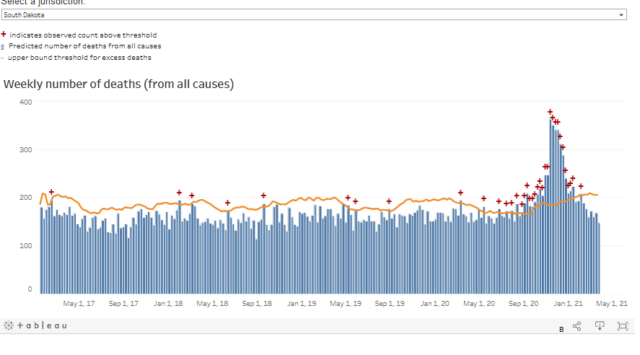 Let’s compare South Dakota, land where the buffalo roam with no mask, to California….land of fruit, nuts, and masks. The Golden State also saw a holiday spike, with a drop that plunged the fatalities under excess death curve. 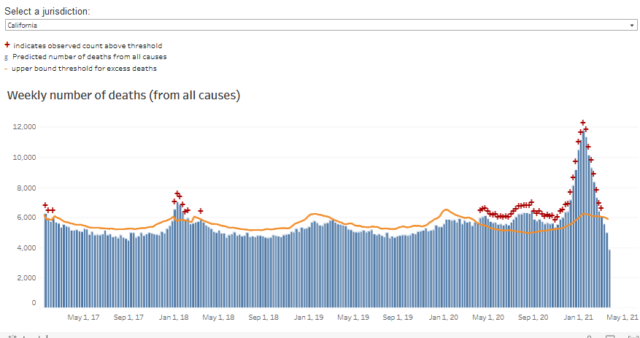 Finally, this analysis would not be complete without looking at New York, the media-designated Gold Standard of coronavirus response. 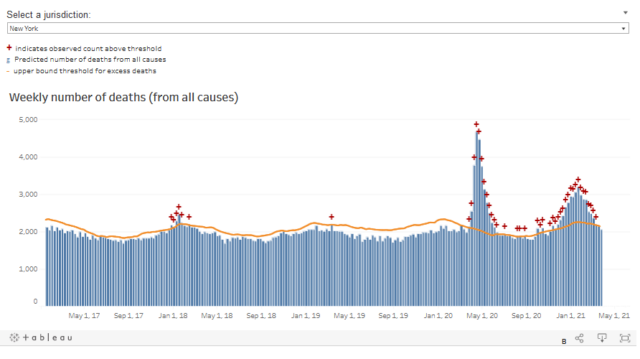 I believe I have enough data to prove my previous assertion: Whether or not “masks work”, mask mandates don’t and they are nothing but COVID-theater.

Additionally, I will also point out that if this were a deadly virus that was going to destroy humanity, the numbers reported would breach the excess death curve significantly. Yet, in many instances, the cases fall below what would be expected.

As more vaccines are distributed and people recover from infection (especially after receiving the new treatments that have been developed), smart leaders would do well to lift the mandates and restrictions and allow people to resume all their regular activities. Political leaders and media-types who insist on masks are following neither science or reason.

The latest numbers to Escape from the CDC appear to cloth show masks as 1.3% effective in reducing transmission. That may be entirely due to the fact that mask wearers do not touch their noses with their fingers.

I’ve had all of this data for weeks. Finally glad it went public. Wish I could find the CDC page with that stat though, think it’s been, miracle of miracles, taken down. If anyone has it I’d be much obliged at: [email protected]

How do people get that stolen year back? The delay between usurpation and relief is an irreversible injustice that the democrats have come to rely on to normalize tyranny.

The reality is we don’t get the past 12 months back. What’s done is done.

For many people like me who lost his father during the pandemic in a nursing home, where no visitations were allowed, a Korean War Army veteran was permitted to pass away—alone.

Governor Wolfe’s and Sec Levine’s restrictions, mandates, and their placement of Covid positive patients into PA nursing homes changed my and my family’s life forever.

I want these blue state Governors to be held accountable.

Imagine if you had missed your Senior Year in HS.

There are now 2 classes that missed their senior year. A few hundred thousand first dates that didn’t happen, along with first kisses delayed. Thousands and thousands of romances that didn’t blossom Which is followed by marriages that didn’t happen. And multiply this by everyone in college, where the dating scene has been non-existent, well, everywhere where the dating scene has been non-existent. I understand that birth are WAY down. Well, with first child normally coming in the first year or so of marriage- yeah, that’s happening. In 5 years there’s going to be a surplus of kindergarten teachers.

My condolences on your loss.

Sec. Levine is now one of the top people at the federal Department of Health and Human Services. Failing upwards.

From what I’ve read elsewhere on the internet, the people who in the past year have most loudly applauded the governors and government officials who have issued the most restrictions generally do not live in those states. I saw it all the time with the Cuomo worship; heaven forbid a New Yorker would say anything bad about him because living there was not a qualification to judge his actions.

I’ve also seen those types of comments with respect to countries. “The restrictions are awful here; it’s frustrating.” “Well, where I am thousands of miles away people think what’s going on there is great.” Why should the person living there care what you think, especially since you don’t know what the reality actually is?

As “p” wrote here, Levine failed upwards. Citizens of the Commonwealth have been screwed by Wolf and Levine for more than 12 months. Just a complete shit show of governance.

But do not count on those two – and the rest of that crew – being held accountable. This is PA where corruption reigns, including at the PA Supreme Court.

1) How was the Wisconsin decision 4-3 instead of 7-0? Because the three Democrats fell into line, of course.

3) What will stop the more populous counties in Wisconsin from issuing their own mask orders, which (apparently) they can do even in the face of this ruling?

What will stop the more populous counties in Wisconsin from issuing their own mask orders?

Nothing, that’s exactly what happened in Florida when the state mandate was lifted. Florida’s orders are limited by law to 30 days, which law the counties spit on by declaring a new emergency every 30 days.

Wisconsin statutes permit cities and counties to make their own requirements. Those actions are taken by the respective city counsels or county boards.

The question here was whether the governor’s 60 emergency power could be extended or reissued, including overriding a legislative veto of his declaration. Fortunately, the answer now is “no” he cannot.

As pointed out, the scary thing is the 3 Democrats on the court all thought he could. In essence, they would give very broad power to a governor on a pretext. Given that most Wisconsin governors have been in the opposing party, that was a bit perplexing.

In poor, backward Alabama, the governor is allowing the statewide mask mandate to expire on April 7. This doesn’t mean that local governments and businesses won’t have a mask mandate of their own, so we’ll still have to wear the face diapers.

One small step. So sorry for Noo Yuck and California. Maybe enlightenment isn’t solely theirs.
.

While they mask legal liability with the mandate, you can flip a coin to pass the time. Heads, you’re infected. Tails, you’re not infected. With the passage of time and place, there is a progressive probability that favors the virus. However, there are steps you can take to mitigate the risk of, if not infection, then disease progression. For example, the latest report from the CDC is that “fat is beautiful” is a comorbidity and accounts for nearly 80% of cases.

Please tell me that this is a NATIONAL DECISION issued by this judge. It seems as though every time the Democrats wanted to stop Trump there was a nationwide injunction issued that would stop President Trump from advancing. This issue should be even easier to stop since the borders are wide open to all kinds of illegal immigrants who are sent all over our country without being quarantined or even tested. There is wher the real issue lies right now but since illegal immigration is a cornerstone of the Democrat platform I guess no judge is allowed to question the motive of the power mad Democrats, right?

It is not. This decision by the Wisconsin Supreme Court is only applicable to Wisconsin.

As well, it only applies to Wisconsin since Trump resisted the demand to issue a federal mask mandate and instead let each state decide how to do things. Federalism 101, but way too many people don’t know that.

The model of, perhaps not Antifa, but anti-fascism.

Things are finally progressing. Last night at the grocery store, around half the shoppers were maskless. It was the first time I’ve been grocery shopping in the past year where I wasn’t the only one without a mask.

Are you in NY? The shoppers at the Wegman’s I go to are still masked up.

“Whether or not “masks work”, mask mandates don’t and they are nothing but COVID-theater.”

This may be so, BUT the Wisconsin Supreme Court did not rule on whether mask mandates are a good idea.

It ruled on whether the governor has the authority to repeatedly impose such a mandate, sans legislative approval. it ruled that lacks that authority.

That is what such courts are supposed to do, isn’t it- rule competently on matters of law?

IF they’d justified their decision on the basis that “mask mandates don’t work” I’d hope they’d be roundly criticized for having done so.

Although I doubt they would have been, as everyone’s become so used to courts usurping legislative authority as to no longer notice such things.

The court ruled on the law. Separately…