Waters’ called on protestors to become “more confrontational” if Derek Chauvin was not convicted of murder, leading even the Judge in the case to criticize the comments, which he said may result in any conviction being thrown out on appeal. 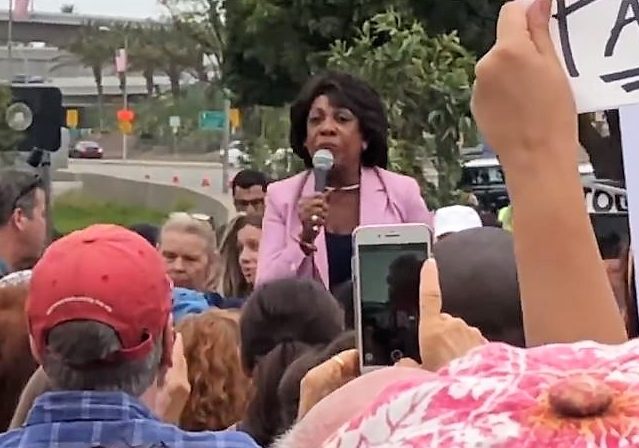 Rep. Maxine Waters (D-CA) told Minnesota rioters to “stay in the street” and “get more confrontational” unless the jury finds Derek Chauvin guilty of murdering George Floyd, not just manslaughter.

Republicans demanded she be censured and condemned Waters for her remarks. The Judge in the Derek Chauvin case said Waters’ comments may result in any conviction “being overturned” on appeal

Rep. Maxine Waters calls for rioters to "stay in the street" and "fight for justice" against police unless Chauvin is declared guilty for murder, not just manslaughter.

"We got to get more confrontational. We got to make sure they know we mean business." pic.twitter.com/YVdV8QHfUM

Waters brushed aside the GOP’s concerns at TheGrio:

In an exclusive interview with theGrio, Waters dismissed suggestions that she was encouraging violence. “I am nonviolent,” she said. The congresswoman said attempts to characterize her words and suggest otherwise is nothing more than a political tactic by the GOP.

“Republicans will jump on any word, any line and try to make it fit their message and their cause for denouncing us and denying us, basically calling us violent … any time they see an opportunity to seize on a word, so they do it and they send a message to all of the white supremacists, the KKK, the Oath Keepers, the [Proud] Boys and all of that, how this is a time for [Republicans] to raise money on [Democrats] backs,” Waters added.

“This is a time for [Republicans] to keep telling our constituents that [Democrats] are the enemy and they do that time and time again,” Waters said of what she described as a Republican strategy. “But that does not deter me from speaking truth to power. I am not intimidated. I am not afraid, and I do what needs to be done.”

“I am not worried that they’re going to continue to distort what I say,” she said. “This is who they are and this is how they act. And I’m not going to be bullied by them.”

Ma’am, you have a history of pushing for chaos (make sure you harass members of Trump’s administration!). Also, don’t encourage “confrontation” in the middle of a city engulfed in riots and violence. She *literally* made her comments in the middle of an angry crowd in Minneapolis.

Jury tampering and incitement to riot much? She needs to be removed from Congress.

Ironically, she requested a police escort to and from that speech.

And she got it? More fool them. They should have refused.

“Truth to power?” Is she not a congresswoman?

A militant wing of the Democrat Party (i.e. KKK) would send money to Republicans?

Waters is so utterly vile. She does represent the quintessence of the contemporary Dhimmi-crat Party, though — utterly worthless, parasitic, destructive, corrosive, self-enriching, mendacious, avaricious, narcissistic, self-serving, career politician narcissist-demagogues who’ve made themselves very wealthy off the taxpayers’ backs.

Repulsive human being. She’s a liar, a racist, and a moron. Perfect Congressional candidate! Can you imagine the intellect of her constituents?

USA is under attack by Marxist subversives who have infiltrated many institutions the drive public opinion and power- such as: the Dem Party, At least 50% of the Media. They are pushing the “victim class” because they know they know the traditional Marxist agenda would be too transparent. Also, victims generate sympathy and they can use the emotional reaction to undermine more American institutions. They muddy the peoples minds with disinformation and indoctrinate the children. People are in denial but this is a truely the situation. These attacks are the socio-political equivalent of nuclear war.

This is one of the things they do. For instance, when it comes to election integrity, the GOP is accused of being “whitey” or white supremacists that want to limit the votes to the white people.

Democrats bitterly “clinging to their racism and victimhood.”

If it’s not a baby, then it’s a feminist/masculinist plea, a color judgment (i.e. diversity dogma), a leverage game. #HateLovesAbortion

No, Maxine. They’re calling a spade a spade. Your actions have consequences, something of which you seem to need to be harshly reminded. What’s really disgusting is YOU fundraising off of your irresponsible hate, moron.

Waters is a walking hate crime. She should give her hair back to the James Brown estate and retire in shame. If she has any.

“Republicans will jump on any word, any line and try to make it fit their message and their cause for denouncing us and denying us, basically calling us violent”

When one reads e.g. The Federalist Papers, or the Anti-Federalist Papers (more intellectually impressive to me personally), and then compares them to current politics and political rhetoric, one can only feel profound sadness for the America of today: e.g. this woman of very low intelligence and extremely crass, inappropriate behavior, has been in Congress for 20 years, and is fawned over by the media — unreal.

>has been in Congress for 20 years

Anyone else notice that she is speaking to what looks like an exclusively white crowd in that picture? Creepy.

She also lives in a very white neighborhood.

So says one of the greatest grifters of all time. Nothing like having your family on the payroll in do nothing jobs, right Mad Max?

““Republicans will jump on any word, any line and try to make it fit their message and their cause for denouncing us and denying us, basically calling us violent … any time they see an opportunity to seize on a word, so they do it and they send a message”

Like impeaching a president for using the word “fight?”

Is there a place that Democrats go, like a botox shop or something, where they can have their hypocrisy detectors numbed?

The Democrat Party is the great evil of today the communist and nazi party was in the 20th century.

Of course you are Waters, there’s not a violent bone in your body. But you don’t seem to have a problem inciting violence from your sycophant followers who are willing to do whatever you say. Disgusting hypocrite.

They aren’t fund raising off her comment, the DemonRats are funding off her first comment and now her response. Like her socialist comrades Lenin and Goebells, she is accusing her enemies of that which she herself is doing. It’s classic projection and something the left are experts at.