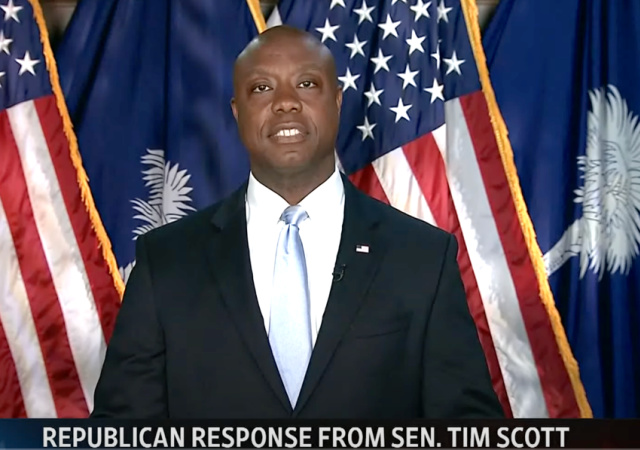 Twitter, known for censoring “wrong” opinions and attempting to serve as an arbiter of truth and facts, allowed the racist term “Uncle Tim” to trend in response to Sen. Tim Scott’s speech.

Scott blasted Biden for failing on his promise to reach across the aisle and criticized the use of race as a political weapon, saying, “Race is not a political weapon to settle every issue the way one side wants. It’s too important.”

That this racist term trended during Sen. Tim Scott's speech is as revealing as it is repugnant, as is the large-scale liberal silence that Twitter promoted a racist attack.

A world in which people of color are forced by racist insults to subscribe to one ideology is grotesque. pic.twitter.com/NDksUEriHn

One major reason this term trended is because white liberals now believe they've earned the right to smear political adversaries with racism and bigotry. Bigoted attacks on ideological heretics from marginalized groups is 100% acceptable in US liberalism.https://t.co/SqscrqUKsl

And for those people justifying this racist attack on Sen. Scott on the ground that he said "America is not a racist country," VP Harris, when asked about it, said she agrees with that statement:https://t.co/WqD7tDQu8r

There is a reason for that: pic.twitter.com/4mutBtuj4r

If he is the man I think he is, Tim Scott doesn’t care what a bunch of children (of all ages) with cell phones think.

I posted the following on Legal Insurrection’s morning story about Tim Scott.
___________
.
TIM SCOTT IS A THREAT TO MARXISTS – SO HE IS A TARGET

Tim Scott is considered a unique threat to the Progressive Marxists because he is black and his “lived experience” gives him great credibility to destroy the Marxist narrative on race. Their agenda cannot succeed without race-baiting to create a victim and oppressor division. They can’t allow a black man in a leadership position stand up and say America is NOT racist.

They will do “60 Minutes” type of attacks on him (like they did on DeSantis). They will try to undermine him in every possible way. Don’t be surprised if they have women claim he abused them 20+ years ago. In the next 6 months there will be tons of stories planted in media so subtly and overtly attack his integrity. Lots of “fact-checkers” will try to undermine him. He raised his profile with this speech and he Marxist know they must take him down.

THEY’LL DO ANYTHING THEY CAN – TO STOP HIM.

So great that Glenn Greenwald, former hero of liberals everywhere, is leading this charge.

The key word is “former”. Dershowitz is also a former hero of liberals everywhere, but now he has been cancelled, like Trotsky.

Greenwald is still respected by many on the left, of course the left is a pretty fractured set of groups so that’s not universal

Harris is right for once: America is not a racist country, but there are a lot of racists there, as evidenced by these tweets.

But, note the rest of her statement she continues to flog the dead horse of the past.

Of course progressive take license to be racist.

The tolerant, loving, “evolved” left, everyone. Let’s give them a hand, middle finger extended.

There are many forms of racism. All are bad, and should be called out.

Twitter’s bias is so obvious and it should be embarrassed. But, it won’t be. Too woke!

What *does* bother me is how the left can live with that the dissonant cognitive cacophony that *must* be hurting their heads (right? right ???)

Racism is strong in the Democrats. Always has been.

If Kamala wants to talk about the history of racism, she might start with the Democrat party. The Republican Party was formed as the anti-slavery party and Lincoln freed the slaves. The Democrat party started the KKK.

Tim Scott: ‘America is not a racist country’

The party that put Japanese Americans in camps yesteryear wants to discriminate against all Asians for entrance into colleges & universities today.

Is this any surprise? We all knew that the communists are nothing but a bunch of racist shitbags.

Scott is as worthless as Lindsey Graham. He was trotted out by the GOPe because he is black.

And all democrats are racist to the core.

The completely intolerant Left, forever falsely accusing everyone that disagrees with them on any issue of being racist, proving yet again that they are incredibly RACIST.

The fact that denouncing someone like this, in purely racist terms, completely ignoring the substance of his speech is seen on the Left as virtue signally shows just how far gone they are.

Its not like they have a problem with some small subset of radical racists that occasionally show their true colors. No. Those that aren’t engaging in this type of abuse NEVER denounce it. They approve of it. And those that are doing it understand this perfectly, which is why they aren’t at all shy about posting their racist hate in their own name all over social media.

Twitter allows a page called truthaboutjews which features the “Happy Merchant” meme (taken from white supremacist sites) and also a racial slur against Black people. It is still there in case anybody wants to see what Twitter calls its community standards. It took a lot of outside pressure to rid Facebook of a “Jewish Ritual Murder” page too.