It’s been barely a year since George Floyd’s killing re-invigorated the Black Lives Matter (BLM) movement, but for its co-founder, Patrisse Cullors, a lot has changed for the better. While millions of Americans remain unemployed due to months of COVID shutdowns, Cullors—a self-described trained “Marxist”—reportedly just dropped $1.4m on a fourth house.

It’s no secret that the Black Lives Matter movement and its co-founder Patrisse Cullors accuse American capitalism of fundamental, systemic racism, and of “wiping out entire communities“; these assertions are core tenets of multiple official BLM organizations.

She describes herself as a trained Marxist:

Still, since last May, Cullors has seamlessly parlayed her position as BLM frontrunner into a number of apparently lucrative, decidedly capitalist enterprises—including a “multi-year and wide-ranging” contract with Warner Brothers.

Still, Cullors has retained her vaunted reputation among social justice activists and eagerly ‘woke’ corporations alike. She’s set to publish a new book in October (an expansion of an article she wrote in 2019 for the Harvard Law Review), launched a project partnership with the UGG apparel company and the Los Angeles-based Hammer Museum, and has been nominated alongside BLM for the 2021 Nobel Peace Prize. And, as the Associated Press revealed last month, the Black Lives Matter Global Network Foundation—seen as the central “steward” for the BLM movement and led by Cullors herself, took in an astonishing $90m in donations in 2020 alone.

But questions and skepticism among some BLM acolytes have arisen yet again since the AP‘s report; many wonder how BLM’s tremendous windfall is being distributed (if at all). Others have demanded more transparency from the Foundation about its financial practices, with multiple BLM chapters claiming they haven’t seen a dime of the money.

On March 2, Michael Brown’s father appeared in a video posted on Twitter in which a Ferguson, Missouri activist complained of being “forgotten” by the movement. Asserting that local organizers and “political prisoners” in dire need of assistance have been “left behind”, he demanded some $20m from BLM’s coffers to “continue the work” his and other groups have been doing in the area.

Even before the article that @aaronlmorrison came out #Ferguson Mike Brown Sr. and many Black community members have had questions about the money #BlackLivesMatter was raising. Here is their statement pic.twitter.com/ykpGZ5Z4KJ

In response to the anger, Cullors took to Instagram on March 6 to complain about being “lied on by my own community”, which, she accused, “lifted up right wing propaganda” instead of supporting BLM unconditionally. 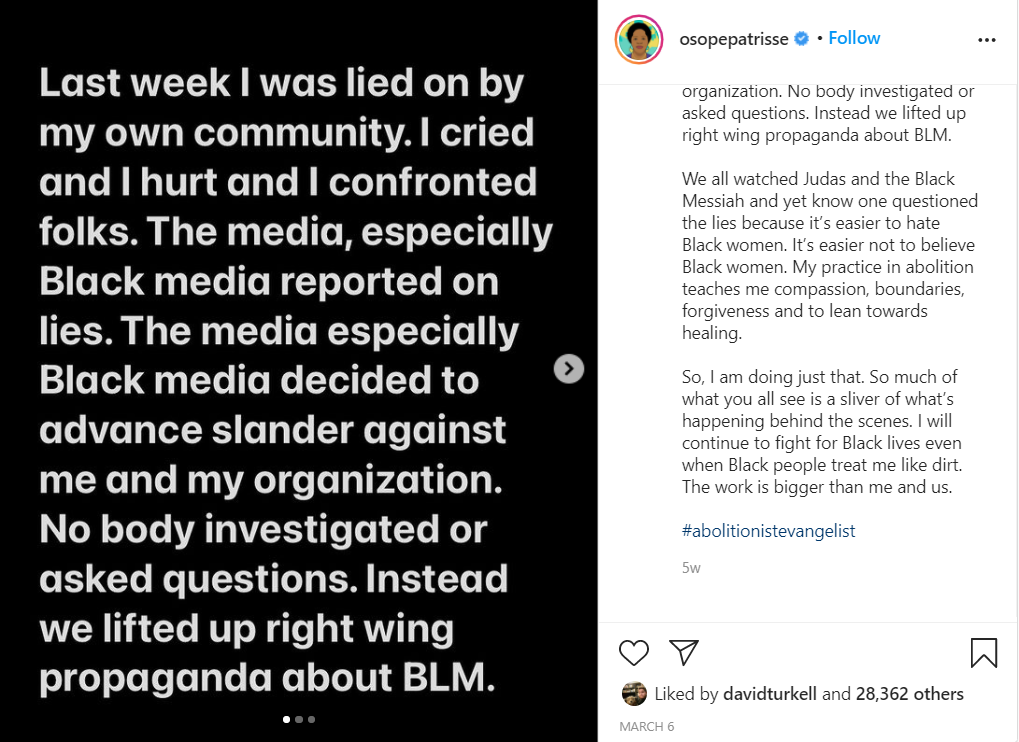 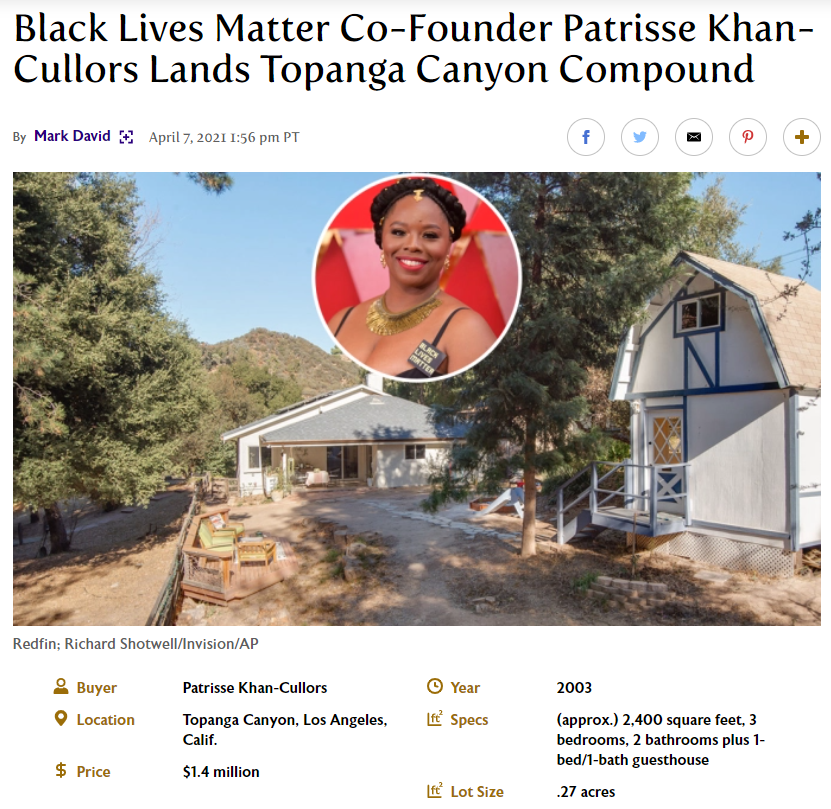 Patrisse Khan-Cullors, 37, also eyed property in the Bahamas at an ultra-exclusive resort where Justin Timberlake and Tiger Woods both have homes, The Post has learned. Luxury apartments and townhouses at the beachfront Albany resort outside Nassau are priced between $5 million and $20 million, according to a local agent.

The self-described Marxist last month purchased a $1.4 million home on a secluded road a short drive from Malibu in Los Angeles, according to a report. The 2,370 square-foot property features “soaring ceilings, skylights and plenty of windows” with canyon views. The Topanga Canyon homestead, which includes two houses on a quarter acre, is just one of three homes Khan-Cullors owns in the Los Angeles area, public records show.

In her new zip code, 88 per cent of residents are white and 1.8 per cent black, according to the census.

The house is only 20 miles from her childhood home in Van Nuys, but is a world away.

In her memoir, Khan-Cullors describes growing up in a housing project less than a mile from the affluent and largely white neighborhood of Sherman Oaks, a community of wide lawns and pools where “there is nothing that does not appear beautiful and well kept.” The four kids were mostly raised by her single mother who worked 16 hours a day to support the family, she writes.

Growing up, Khan-Cullors lived in “a two-story, tan-colored building where the paint is peeling and where there is a gate that does not close properly and an intercom system that never works,” she writes. “The only place in my hood to buy groceries is a 7-Eleven.”

Khan-Cullors embraced activism and Marxism at a young age. “It started the year I turned twelve,” she writes. “That was the year that I learned that being black and poor defined me more than being bright and hopeful and ready.”

Do you even comprehend my take? She had a lot of options on where to live. She chose one of the whitest places in California. She'll have her pick of white cops and white people to complain about. That's a choice, bro. https://t.co/rBkOnSjb4u

Incensed, activists have vented their frustration with Cullors—and her reaction to the scrutiny—on Twitter.

I never saw huey, angela davis, kwame ture, etc. take an endorsement deal but we supposed to believe these clowns are cut from the same cloth as them.

These people have no shame. Just vibes and million dollar Topanga Canyon Compounds…

and the activism in question isn’t even organizing or doing labor for their communities. It’s literally posting on social media and profiting off gofundmes that were created for families in need. Disgusting individuals.

The problem is with someone with creature comforts the people who propelled this movement into common consciousness don’t have proclaiming they are in danger in order to gain public support.

Patrisse Cullors getting Black academics to sign letters of support for her is the goofiest thing I seen all week. Every single person who signed that shit should be ashamed and now we know you’re complicit in the commodification of the deaths of Black people.

— Don’t Argue With Me If You Dont Have Any Citations (@JamelTheCreator) April 7, 2021

I understand how tempting the opportunities are, some of them opening up for the first time. I understand that we all have bills.

But do understand that doors washed with blood that isn’t yours comes w/an extremely high debt, and you cannot get mad when it’s called out. 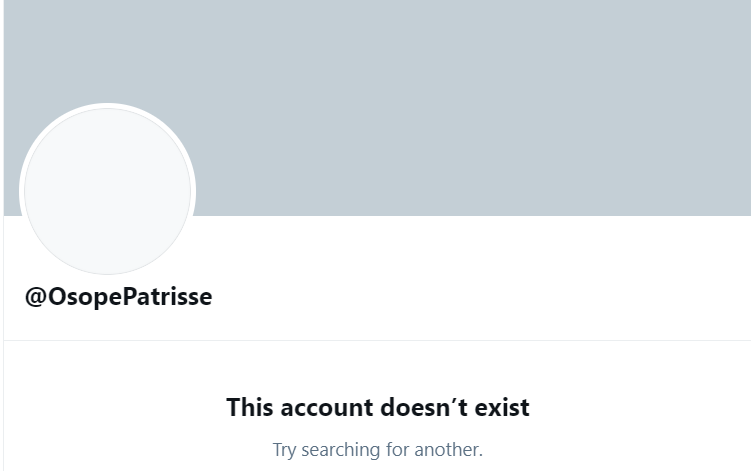 As I wrote in October, Black Lives Matter has made a name for itself by equating American capitalism with racism, police brutality, and injustice of all stripes; as a movement, BLM has long sought to discredit the traditional “up-by-your bootstraps” ideals of the American dream—ideals which, if Cullors’ memoir is to be believed, she herself has exemplified. A Black child who grew up in an underprivileged, single-parent home, Cullors has overcome those circumstances and leveraged her activism into a wildly successful brand and career—with lots of personal property to show for it.

No wonder her less famous, less wealthy compatriots are angry with her: in her quest to incite Marxist revolution, she’s gone and proven that it’s not even necessary. Oops.

Not built on the backs of dead black children but on the trust funds of guilty white liberals. Equity, ya know.

There goes the neighborhood. Wait. Topanga Canyon?” If the locals are true to their beliefs, it’s here comes the nei9hborhood. Right?

So the two self-avowed Marxists Patrisse Cullors and Bernie Sanders own 7 houses between them.

Marxism is for the masses, dah-ling, not for the Marxists! Silly.

Is Maxine Waters attending the housewarming

The Dictatorship of the Proletariat must be housed somewhere. Maybe…like China… the capitalist good life will soften them…NOT.

Marxism can be lucrative.

The Chinese communists discovered this. And thanks in large part to Bush Sr they don’t have to worry about pesky problems like people demanding freedom, liberty, and free elections.

They took care of that problem with the Tiananmen Massacre. As Bush Sr sat on the sidelines telling them not to worry about how the US will react. Because the US would do and say nothing.

American commies are hoping to follow the Chinese commie lead and do a repeat in Amerika.

With the help of people like Patrisse Cullors. Who is only beginning to reap her own personal rewards for advancing The Cause.

Really? You think it’s any of America’s business if a country on the other side wants to shoot a few thousand of it’s own citizens who won’t sit down and shut up?

Yes, of course it is. It’s everyone’s business. Your is the Kitty Genovese theory of foreign relations.

Mine is the don’t interfere with things you don’t understand theory of foreign relations. If George W had listened to his dad and run his foreign policy that way, the whole Iraq War fiasco could have been avoided.

Was gunning down the Tiananmen Square protesters a bad thing? China enjoyed an era of unprecedented prosperity in the 30 years that followed. Maybe that would have happened anyway, but maybe it wouldn’t.

Notice how pictures of American neo-Marxists always show them with great big smiles and great teeth?

America is getting Marxism with a smile. How American is that?

Have a Gulag and a smile!

It is the corporations who gave money to BLM who should explain this corruption. Marxism is a fraud. Why shouldn’t Marxists be frauds?

We Americans love a good swindle, so long as we aren’t among the suckers who fell for it.

Leftism pays well, BLM always was a shake down operation

BLM is just the modern day version of the Rainbow Coalition and NAN of Jesse Jackson and Al Sharpton. They used to use race to do those shakedowns of big corporations (among them was Coca-Cola–imagine that!! Once you cave to blackmail, you are always their payroll!) Just like not all black lives matter, not all black lives deserve a piece of the Shakedown Pie either. Then again, I guess they are following the example of the Boo’s Brothers–Barack and Bernie–who have also shaken down corporations and foundations to buy themselves nice homes at taxpayer/corporate expense. That‘s the Democrat way!!

How long before the line is trotted out: “These are the ‘peoples’ houses”; of course lived in and cared for by the leadership because they are ‘suffering’ for the ‘people’.

She reminds me of the black power Laureen Hobbs character in Network arguing about the overhead clause in her contract.

BLM obviously gets its money from somewhere (even if mainstream media are unable to generate any interest in finding out where/who that is), yet there seems precious little accounting for who and what it’s spent on.

Perhaps Andy Ngo will author a followup to “Unmasked”?

Perhaps we’re all beyond shock now, yet the lack of interest in how BLM, Antifa et al are funded somehow still seem remarkable.

Did she buy any houses in any African rural villages? A place where she could immerse herself in the ancient culture of Home Africa. Where she could live the authentic ROOTS life with the decedents of humanities home.

A place where she could share her experiences with the natives. Experiences like living with electricity, running water and sewage management, while learning the joy of natural air conditioning and boiling water. Of draught and famine, of disease and broken bones. Of civil wars and being killed by a 13 year old “soldier”.

She is missing several opportunities.

To paraphrase Grocho Marx regarding country clubs, “I would never want to live in an exclusive community that would want to have me as one of their resident neighbors.”

Wish we could post memes. Picture liz warren, bernie sanders and a(hole)oc.
Meme:
No American politician who advocates socialism lives like a socialist.

….soon to be in trouble for miappropriated funds