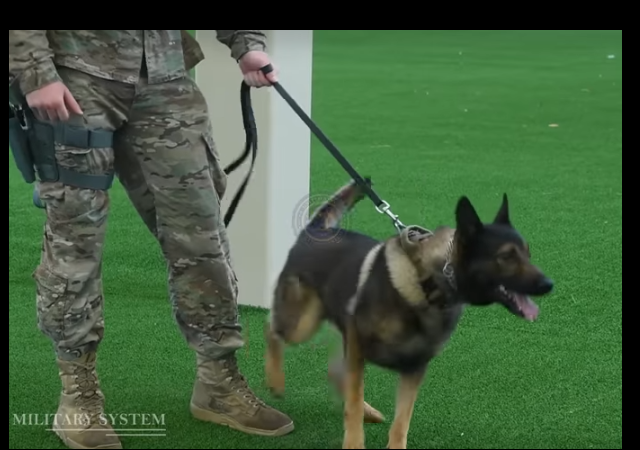 “Although working dogs are not an official part of the current defense industrial base, the low domestic production capacity of working dogs threatens some of the government’s capabilities to provide national security,” researchers wrote in the report. “Of the dogs within the current workforce, approximately 90% were bred overseas.”

Military working dogs are normally one of four breeds: German Shepherd, Belgian Malinois, Dutch Shepherd or Labrador Retriever. Many are imported from Europe.

Their tasks include detecting explosives, sniffing out drugs and tracking enemies.

“A lot of our science and technology for years has been trying to replicate the work these dogs do. Their olfactory glands are 10,000 times more sensitive than any piece of equipment we’ve been able to develop. So, the detection work they do, a dog finding explosives or drugs, that’s never going to be replaced,” Major Matthew Kowalski, commander of 341st Training Squadron at Joint Base San Antonio, said, according to the report.

Sheila Goffe, president of the American Kennel Club, shed some light on the situation in her commentary on the report.

The federal government currently maintains approximately 5,000 working dogs across four departments — the Departments of Defense, Homeland Security, Justice and State. But only 7 percent are bred domestically, and the rest are imported from Europe, the report found. Another estimated 5,000 working dogs are deployed across local law enforcement and private facilities, with a similar low percentage bred domestically.

The best dogs tend to be retained for use in Europe, where they are bred. And the U.S. finds itself in the position of competing against military peer competitors Russia and China for the same dogs in the same markets.

The supply of capable working dogs from foreign sources is continuing to tighten. The threat of terrorism and resulting demand for working dogs within Europe and around the world means there’s a growing shortage of even mediocre-quality foreign dogs available to protect the U.S.

The Department of Defense maintains a modest breeding program at its kennels at Lackland Air Force Base in San Antonio, far from sufficient to meet domestic demand.

The report had several recommendations to resolve this security issues, the chief one being for the federal government to create a program/consortium by partnering with other government agencies and non-profit organizations to absorb or subsidize some or all of the costs necessary for a business to start a breeding program. As the current administration is tossing money at everything, why not something that will actually protect Americans?

Other ideas include restricting imports to spur on the domestic market, public-private partnerships, and reworking procurement procedures. However, there is one last option that the report did not address:

The first official semi-autonomous robot dogs were delivered to Tyndall Air Force Base March 22 for integration into the 325th Security Forces Squadron.

The purpose of the Quad-legged Unmanned Ground Vehicles, or Q-UGVs, is to add an extra level of protection to the base. The robot dogs, designed by Ghost Robotics and Immersive Wisdom, are the first of their kind to be integrated onto a military installation and one of many innovation-based initiatives to begin at Tyndall AFB, coined the “Installation of the Future.”

“As a mobile sensor platform, the Q-UGVs will significantly increase situational awareness for defenders,” said Mark Shackley, Tyndall AFB Program Management Office security forces program manager. “They can patrol the remote areas of a base while defenders can continue to patrol and monitor other critical areas of an installation.”

Features applied to the robot dogs allow for easy navigation on difficult terrains. The robot dogs can operate in minus 40-degree to 131-degree conditions and have 14 sensors to create 360-degree awareness. They are also equipped with a crouch mode that lowers their center-of-gravity and a high-step mode that alters leg mobility, among other features.

I also have a few thoughts on resolving this national security situation. The current occupant of the White House may be just the leader needed to spearhead the effort to increase the U.S. supply of fierce fighting dogs. Also, our current Secretary of Defense could focus on species diversity programs.

Just have the diversity office find people in the ranks who identify as dogs.

That’s how the world works these days, doesn’t it?

The dogs love the work. That’s what the animal rights people get backwards.

according to the Bee, DOD is already addressing this issue:

Aw man you beat me to it. With all the destructive divisive and totalitarian policies in this country, the bee has been therapeutic (and it’s cheaper than some liberal brainwashing d-bag that would want to talk about how good it would be for my mental health if I just eased in and checked my privilege).

Even the dogs don’t want to serve under a Democrat administration. Not surprising given Obama’s dining habits and Biden’s showering proclivities.

There are two of these dogs terrorizing the White House lately. They’ve already bit two WH staff and crapped in the press room (at least that’s the story and no one has checked Biden’s pants). By now I’m sure they would be available for a return to duty for what they were trained for.

Joe Biden* and “Doctor” Jill were virtue signaling and “recued” the dogs. Now the dogs are doing what dogs will do when they’re in a strange situation without strong leadership… they’re afraid and lashing out.

Even the dogs know that Biden is a weak, pathetic imbecile.

It’s no secret that dogs can sense bad/evil so is it any real surprise they have been nipping/biting people in the White House? They really need to should send Champ and Major over to the Capitol and see what they “think” of Pelosi and Schumer and the others.

We’re screwed! The Faux in Chief and his Bimbo in Waiting haven’t figured out how to keep the first dogs from attacking the help and crapping on the rug!

If he can’t even control his own dog, how can he be trusted to control anything else?

I’m not entirely convinced that doodoo accident was by one of the dogs, and neither should you. The dog (or the Russians) always gets blamed and time and time again, it’s been the democraps, er, democrats behind it.

Well we have a solution to that where we don’t have to pillage everyone’s money with more budget increases.

Transfer all of the money being spent on “Diversity and inclusion” and other political fields and buy dogs with those!

While at it take the budget for mass murder of Muslims in cold blood following lying to congress by claiming there is no collateral damage and buy dogs with it!

While on the subject take money being spent to hire people to purge Republicans from the military and yep buy dogs instead!

Our spending is over the combined spending of every European country, the military at some point needs to be told no to spending increases on principle alone, and frankly I don’t trust the social justice warrior leadership of the military anyway and don’t think they need an unlimited budget. Let them earn back trust, and a good place to start is by not constantly asking for bankrupting budget increases.

Police departments know how to buy exactly the same dogs.

Why would anyone join the military during a biden* administration? This article is just below yours Leslie.
———————————————

“I don’t get it. If we’re low on dogs, why don’t we just plant more dog gardens?”
-Alexandra Cortez

The left is more into poodles and chihuahuas.

I heard that the military is implementing trans species diversity…

Since those dogs are becoming more and more likely to be used against *us*, why the hell should we want them going to the military?

I hope the ratio of female to male dogs is politically correct.

The article states that the best dogs are “being retained in Europe”. Isn’t this a logistics issue? What the heck is the mission for military dogs in Europe? Sniffing French derrierres?

This sounds like YET another money grab by Federal agencies.