It took almost a year for Ted Wheeler to notice the violent rioters “want to intimidate” and “want to assault.” 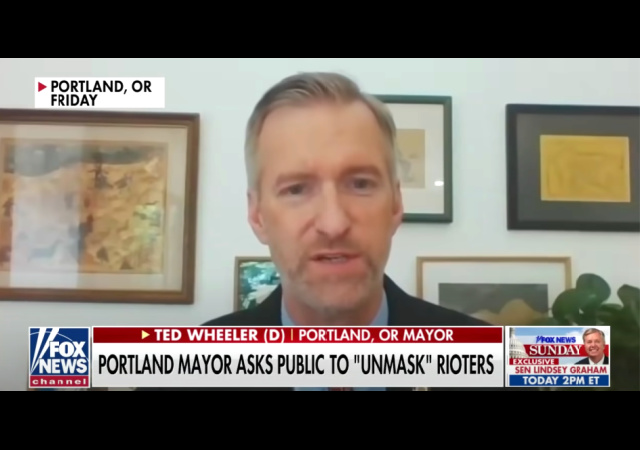 Rioters have been terrorizing Portland, OR, for like what? Almost a year now? Remember when Mayor Ted Wheeler turned away help from President Donald Trump? Remember when Wheeler exploded when Trump sent in troops to protect federal buildings and property?

Wheeler finally admitted the rioters want nothing more than to burn and destroy the city. It’s precious that he acts like this is completely brand new!

“If BLM leaders can show the courage to stand up to this mob, then we all should. … Make a stand and take our city back,” he said.

Wheeler asked residents to note the license plates of people who drive to the events in various neighborhoods and then don all black clothing and grab shields or weapons from their cars. Share those license numbers with police, he said.

If people overhear others bragging about the violence they committed in the city, report it, he said.

“Our job is to unmask them, arrest them and prosecute them,” he said.

Wheeler extended the state of emergency, which ends on Monday at noon local time.

Something tells me this will not be the last chaotic weekend in Portland.

could have solved the problem like they did in Dallas – with actual law enforcement.

All I am seeing are mostly peaceful protests.

I have been reliably told it’s what democracy looks like. Why is the mayor against democracy?

Shameful. His white privilege is show. Why is he denying the mayor’s position to a person of color? He is extending institutional and structural racism in America. I demand his immediate resignation and banishment from the country.

This guy is one dumb shit, the best and safest way to shoot them and then take the mask off. It would also greatly improve the gene pool.

Why can’t a bunch of people encounter a mob of ANTIFA and when they are attacked by the mob kill them in self defense?

Well, believe it or not, the last time a guy tried to defend himself with a against the mob, it was he and not the mobsters who got arrested. If I’m not mistaken once in Portland and once in Salem.

Such is the state of looniness in western Oregon. (I can’t comment about Eastern Oregon specifically, as we don’t have the Willamette Valley’s looniness, and law enforcement takes a different tack. My speculation is that ordinary common sense would apply.)

… that should read “with a gun against the mob….” Gotta proofread better.

Or even just one Antifa in black bloc, regard it as their uniform, and shoot them as an enemy combatant. Their mask is then irrelevant. Then shoot the next one.

He almost gets it. He still subscribes to the Pro-Choice, selective, opportunistic, relativistic religion. That said, the left-right totalitarian-anarchist nexus is leftist.

“If BLM leaders can show the courage to stand up to this mob, then we all should. … Make a stand and take our city back,” he said.

BLM already is the mob.

Some, Select Black Lives Matter is part of the mob invading businesses and neighborhoods to intimidate people a la Democrat-affiliated KKK, a legacy of diversity rackets.

That said, diversity of individuals, minority of one. Baby Lives Matter (BLM).

I am wondering if this is driving a resurgence of the KKK. As much as I am pissed, I wouldn’t joint them, but it is becoming increasing clear that this is a gift to them and their outlook.

You can almost see the soy pumping through Ted’s body. Every cop in Portland should quit and leave Ted to the wolves that he has enabled.

Only in Portland could this simpleton scion of wealth be elected. Well, maybe Seattle.

It is not just him, the DA and judges share a responsibilty.

This moron created the problem, now he’s the man to solve it?

Like in the beginning of WW2, when the inept American general Lloyd Fredendall caused the catastrophe of the Battle of Keserine Pass, the US Army did not ask Fredendall to fix the problem. Rather, they canned him, and replaced him with Patton.

We know the rest of the story.

Wheeler is Fredendall. Trump is Patton.

I guess kneeling did not work out.

Fat lot of good that’s going to do, Ted. You let this go on for over a year, and NOW you want to be serious about Antifa? Not to mention your DA has a “Catch and Release” fetish. DOJ is no better when prosecuting cases against the rioters.

People of Portland, you voted for this. Reap what you sow.

And after they have reaped enough, they just might dump Dems.

My days of not taking Ted Wheeler seriously have finally come to a middle.

I upticked you for the quote, not the sentiment. I still don’t take him seriously 🙂

Sheesh! This putz can’t even group together the ENTIRE population of Portland! He just has to virtue signal always.

Maybe he should call President Trump?

@EdMorrissey
The NYT buried this news in paragraph 21 … of a 26-paragraph story. At best, this shows that Kerry is enormously and irresponsibly indiscreet; at worst …

No Ed, he’s a TRAITOR at best, and you know what should happen to TRAITORS

Shut up, Ted. How can you be terrorized of an idea, not an organization? People who fear ideas are pussies.

Antifa/BLM violence in Portland is a Myth.

He’s acting like that crimes against special people are the only crimes that will be prosecuted.

He’s not acting, he’s informing us.
Like that snarky woke academic who recently retorted to somebody, “Poor John, didn’t anyone ever tell you that the First Amendment doesn’t cover hate speech?” Um, no, you ignorant sl*t, because the people I hang out with know true things.

Yes, yes. Citizens must act. the numerous arrest records & photos they have cannot be used because… Racism! (or something)

I’ve come to a point where I’m rooting for the rioters in these blue cities.

Beat you too it. I hope they burn down every blue city.

Kind of sounds like the democrats are getting ready to ditch antifa and blm. They were useful idiots, some got paid off better than others but they’re a liability now and like every fascist regime in history it’s time to take out those useful idiots before they boomerang at the dems.

They want to bash, like they did to the nonprofit Boys and Girls Club in Northeast.

Oh noooooess!! Not a NONPROFIT!!!

She’ll blow them away.

You’re probably right. She is a loose cannon, and in the coming dayss, she will be as desperate as she is scared shitless.

ISWYDT!!!!!
Chicken dinner for you.

She has already identified the problem as white supremacy.

Portlanders have voted for, and have encouraged this Communist cr*p for decades. Let the city burn to the ground.

That idiot made his bed. No sympathy, I have none left.

Perhaps the Governor was mugged. Or they showed up on his lawn. Suddenly it’s a problem.

I don’t know if he is making a change out of change in belief, or if he is a political opportunist spying something invisible to everyone else but this change is a very welcome one.