“My hands are tied because under the new bail rules, I have absolutely no authority or power to set bail on this defendant for this alleged offense.” 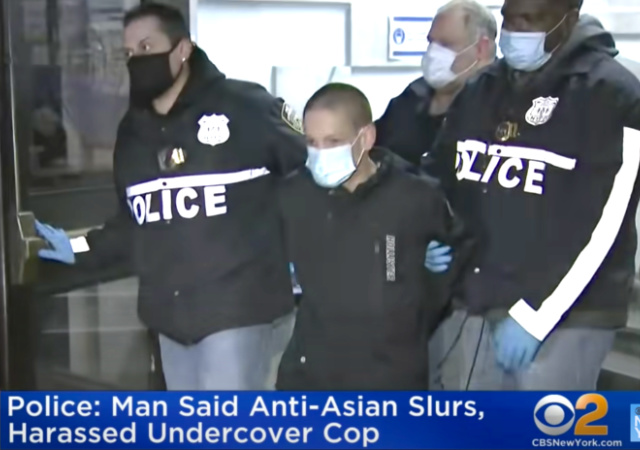 Queens Supreme Court Justice Louis Nock said he had to release the man accused of attacking an undercover Asian NYPD cop without bail due to New York’s new bail rules:

Suspect Ricardo Hernandez, 32 — who faces three hate-crime charges in the attack on the unnamed cop on a Long Island City train platform around 5:30 p.m. Saturday — has at least 12 prior arrests under his belt.

At Hernandez’s arraignment over the attempted push onto the tracks, Queens Supreme Court Justice Louis Nock said the state’s bail-reform measures barred him from holding Hernandez in jail.

“My hands are tied because under the new bail rules, I have absolutely no authority or power to set bail on this defendant for this alleged offense,” the judge said.

The new rules do not allow bail for “attacks that cause no injury.”

Hernandez confronted the undercover cop on the N train platform at 31st Street and 39th Avenue in Dutch Kills and tried to shove him onto the tracks.

“That’s why you people are getting beat up,” Hernandez allegedly snarled. “I got nothing to lose.

“I will f–k you up!” Hernandez added, according to cops. “This is my house.”

Some how, the people of New York elect idiots that put rules/laws that reward criminals for breaking laws. Making it easier to live a life of crime does not make society better.

Stepping back: do you really believe NY voters voted for this crap anymore than LA voters voted to elect a psycho for its D.A. (Gascon, who is subject to a recall now)?

VOTING MACHINES ELECTED MANIUPATED BY THE SWAMP ELECTED THESE PEOPLE, NOT VOTERS.

TFR – Romey is absolutely correct. The woke voters are getting what they voted for: woke policy. TFR, the question is, why would you presume otherwise? Are voters not bright enough to understand that dems are the source of woke policy? I say, let the voters enjoy the fruits of their wokeness in NY, Portland, Chicago, etc.

I’m with Romey on this one.

There is a reason New York is a ONE PARTY STATE.

54% of NYC voters pay no taxes (see story on this site 3 months ago). They want free stuff and no jail.

The UNIONS control the Dems. 1/3rd of all voters are in the Unions.

Actual taxpayers make up only about 46% of the voters – but 10% of taxpayers carry about 70% of the individual tax burden.

Dems have made it structurally impossible to vote them out of office. It’s rigged. NYC taxpayers are hostages. Their only solution is to leave the City – and many have done so in the last 4 years.

With taxpayers leaving AND taxes continuing to go up – NYC is at the early stage of a death spiral such as the one that killed Detroit.

Um, that’s not rigged. Nothing that you’ve alleged makes NY elections rigged. On the contrary, you’ve explained exactly why a large majority of NYC voters actually do vote for these people and policies. With an electorate like that why would the Dems bother rigging the elections? It would be a waste of money and effort, and there’d always be a risk of getting caught.

Yes, NY voters voted for this crap. There is no evidence at all that NY voting machines are rigged.

So it’s working just the way the dems wanted it to.

Dhimmi-crats giving more protections, deference and consideration to criminal thugs, than to law-abiding citizens and law enforcement officers. And, in other news, the Sun rose this morning.

Trump is STILL inciting white supremacist White-Hispanics to do his bidding!

That’s a “32-year-old man?” It looks like Dewey from Malcolm in the Middle.

Erik Per Sullivan will be 30 in less than 3 months.

Well then, if the judge can’t do anything with this scumbag then perhaps someone in the community will step-up and do something. After all, seems like vigilante justice is the only recourse in some blue states these days.

Is that Judge stating that mere words are NOT violence. How dare he, didn’t he get the memo? Mean words trigger folks! Those words cause lasting psychological damage and irreparable emotional pain!

No, it’s more nuanced than that. This dbag actually physically assaulted an officer. But the officer sustained no actual injuries from it. There is a line here, but it’s drawn in the wrong place.

Good. New York needs to live with the crap their elected reps do to them without complaint.
Until they finally wake up and vote with some intelligence for people who aren’t practicing fascists.

Another triumph for Governor Cuomo, who signed this into law last year.

As a New York voter, I’d like to point out that many of us vote against this stuff, but the nutjob majority rules. As an example, last November, do you know what the congressional choice was in my district? Jerry Nadler vs nobody. I did a write in, but still . . .

Good to know your state Vichy GOP is hard at work. The Virginia GOP was lazy enough about nominations to let their state turn blue, but even they didn’t leave federal seats unchallenged.