The creation of the fund became a contentious point in budget negotiations, even among Democrats in Albany. 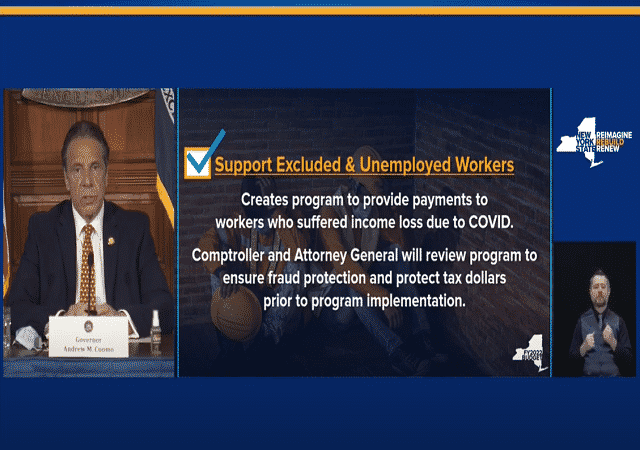 The New York Times reported the state legislature created a COVID relief fund to give unemployed illegal immigrants a one-time payment of up to $15,600 each if they can prove that they lived in New York and were out of work due to the pandemic. The “excluded workers fund” contains $2.1 billion for the effort and was included as part of passing New York’s $212 billion budget in an agreement reached on Tuesday.

Cuomo announced the program during his budget briefing on Tuesday.

The creation of the fund became a contentious point in budget negotiations, even among Democrats in Albany. Tensions spilled over onto Twitter, according to the Daily News. Some legislators worried the bill went too far and concerned that constituents who also have been struggling but have seen no relief might be angry about the measure.

The Fund’s inclusion in the budget came after a coalition of supporters organized, protested, and staged a hunger strike.

For 20 days, workers across NY have been on hunger strike.

They’ve gone without food for weeks to demand that our state budget include $3.5 Billion for New Yorkers who’ve been excluded from other pandemic relief.

It’s been a full year. It’s time to finally #FundExcludedWorkers.

Most powerful thing I’ve ever seen at the NY Capitol.

Twenty-one days into a hunger strike, excluded workers are wheeling and marching through the concourse to #FundExcludedWorkers. @FEWCoalition pic.twitter.com/6JVZvvFTmY

People celebrated the announcement in the streets and on Twitter.

This fund will support immigrants excluded from relief at a level that reflects a year without income.

GRACIAS @FEWCoalition allies & the fierce hunger strikers who put their bodies on the line for 23 days! pic.twitter.com/W4rqqF33UR

But not everyone is celebrating.

Sorry, this is just wrong. Both my parents worked 16 hour shifts as nurses at the height of the pandemic, often to the point of near collapse. They’ve buried friends and colleagues who worked just as hard. That $2 billion should be going to them or stores that had to close.

Imagine $2.1B diverted to needy veterans in New York…it really is hero to zero for veterans 😔

Well, guess I’m voting Republican in the next state elections. First time in my life.

There is no official tally of undocumented immigrants in New York, but the Migration Policy Institute put that number near 900,000 in 2018.

Look on the bright side, at least you and me will get the mandatory privilege of bailing out NY when they inevitably go bankrupt.

Right. Why should NY people give a damn about any of this? Biden, Chuckie, and Nancy are just gonna write a federal check to cover the whole thing, and call it “pandemic relief,” or “infrastructure,” or “tribute to the Minbari,” or whatever.

New York is hopeless. This is just Cuomo returning it to Mexico.

Let me get this straight. I pay taxes to reward illegal activity over and above the free healthcare, food-stamps and schooling that are given out in sanctuary cities like NYC. But actual citizens who’s businesses were destroyed – they get nothing. NOTHING to compensate for their loss.

I know a dozen business owners who had to close. They each lost 100,000+ investment in their business. There are hundreds of small businesses owners who lost everything they work years to build. There is no government program for them. I guess no one gets points for virtue signaling support for private enterprise.

If you ever wondered what it would be like to live in a country during a communist takeover, how do you like it so far?

Business owners losing everything; their employees being out of jobs. Ever-increasing restrictions. More and more “rights” for illegal aliens. Leniency for murderers if they are black. (The tasered and killed Pakistani delivery driver being one example). Travesties like the Chauvin case.

Either the American people are incredibly patient, or we have become what William J. Lederer referred to as a nation of sheep.

My thoughts are that we, you and me, have totally become sheep. Follow the rules, obey the law, be quiet and sit down…. ANY ONE OF US could put the brakes on this foolishness in less than a week, it just needed for someone to stand up and pay the price. Life in prison or death….

What action would have the greatest impact?

Interesting viewpoint. I think his idea of targeting the “running-dog” cheerleaders instead of the star players is quite provocative. Remember when CNN was all aghast that molotov carriers were converging on their HQ (conveniently forgetting they shared the same complex as a police station)? That, but much more of that.

$2.1 billion. For a social program that no one voted for. Taxpayers mean nothing in New York State or New York City.

Call it what it is. A pay-off for votes by the Democratic Party to maintain their ONE PARTY STATE. They want all these thousands of people to vote Democrat. They take your tax dollars and given it to the voters who pay no taxes.

As a NY tax payer I have to state , “What the hell is going on in Albany when it’s decided to give every illegal with a NY address a check for $15,600 and then turn around and tell the resident tax payer that their lawful standing as a tax payer comes with a requirement that any 2020 NYS Unemployment check received which was subsidized with federal funding and untaxable for Federal IRS reporting, is and will be taxable income in NYS. Talk about double standards. Unbelievable!! “

So what kind of documents will these undocumented workers be required to provide to get their checks, and how much will NY promptly deduct out of them for taxes while investigating them for back taxes in previous years?

I must say, a number of the “hunger strikers” look as if they should stay on strike another few weeks.

Yes, rude, but I’ll bet that if one dug into the “hunger strike” one would discover that they were, behind the scenes, getting nutrition after all.

It’s a Union operation, you know how it works. Every union member passes out a tea shirt to their wives, sisters, brothers and mothers to go down and represent the union. That’s how they get a podunk union of 1000 people to show up in force with 2500 people. Maybe (and that’s a big maybe) there will be 50% true union members in the crowd. The rest are just players in the scam.

They only were on hunger strike between breakfast, brunch, lunch, and supper – except for a midnight snack or two.

There’s only one way to fight this. Start a movement to have everyone in the country simultaneously stop paying taxes. No funds, no squandering them.

Of course, that would require everyone in the country to first withdraw every penny they have on deposit with a bank, brokerage, or the like. Possibly sell all investments as well. Then ring their homes with Pelosi fencing and minefields.

The Dhimmi-crats are fast ushering in a reality in which illegal aliens possess more rights, privileges and attention paid to their needs, than do American citizens. Citizenship continues to be devalued and diluted.

The vile Dhimmi-crats are mocking every single American citizen.

Insane. 1% of the fat state budget, for something no one asked for.

This is a prime example of government passing the cost of their bad decisions on to the citizen.