Police: “Because Mr. Brodd no longer lives in the city of Santa Rosa, it appears the victim was falsely targeted” 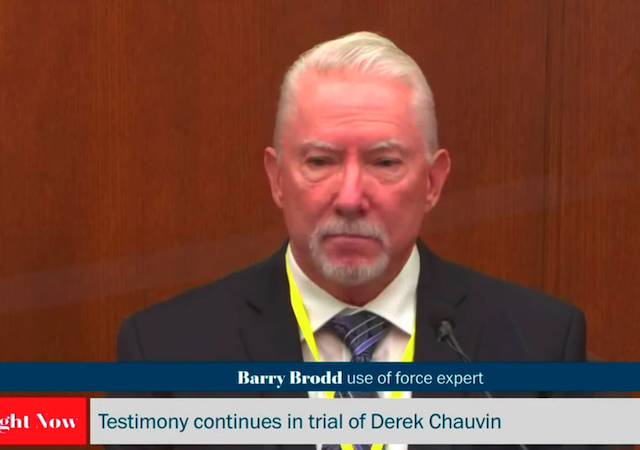 Vandals smeared pig’s blood and left a severed pig’s head on the porch of the former residence of Barry Brodd, the defense use-of-force expert in the Derek Chauvin trial.

The former Santa Rosa home of Barry Brodd, who testified as a defense witness in the Derrick Chauvin murder trial, was smeared with pig’s blood and had a severed pig’s head dumped on the front porch in an early Saturday morning vandalism attack.

Chauvin, a former Minneapolis police officer, is currently on trial facing murder charges in the death of George Floyd.

Santa Rosa police said officers responded at 3:07 a.m. to a residence in a west Santa Rosa neighborhood that had just been vandalized.

The victim called police after they were awakened by a group of suspects — all dressed in black — who threw a pig’s head on their front porch and splattered blood on the front of their house and then fled.

The vandalism to the victim’s house exceeded $400 making the crime committed by the suspects a felony vandalism.

Investigators believe the vandals thought that Brodd — a former Santa Rosa police officer — still lived at the residence, but he has been a Santa Rosa resident for a number of years.

“Because Mr. Brodd no longer lives in the city of Santa Rosa, it appears the victim was falsely targeted,” police said in a news release.

Can’t call this a racist crime. Your working choice is between BLM and the pasty white Antifa. Either way, nothing would or will come of it. Both are protected militant wings of the power mongers. The private citizen is on their own …. take the beating or do the time for fighting back.

“The private citizen is on their own …. take the beating or do the time for fighting back.”

Daniel Perry, the Fort Hood soldier who shot a BLM/Antifa protester that was raising an “””””ASSAULT WEAPON””””” to his car window, while he was being surrounded by other protesters, will have charges presented to a grand jury in the next few weeks. No word on the protester who shot at Perry, who was in no danger, as Perry was driving away.

Well, the current owner doesn’t deserve it any less than Brodd does. Unless Brodd deserves it for doing such a poor and unprepared job.

Brodd should have prepared like his life depended on it… because someones did.

That was my first thought. The guy didn’t even do well.

It was interesting to me that he first reached out to the prosecution to offer his services and was declined, then apparently went to the defense. Sounds like he just wanted to make that good expert witness money to say whatever needed to be said by whomever hired him. Can’t trust a guy like that.

Worst part is no one will do anything about it.

Not only will they not manage to find and convict these individuals sans undeniable evidence from the owner’s own security footage (if available), but they won’t even publicly condemn it or mention it on the propaganda networks. This is big news about exactly what NOT should be allowed by civil dissidents (because it’s no longer civil). However, the cable outlets trounced over the line in the sand of what should be tolerated long ago now.

Things are becoming much like the wild west, we need the right to respond accordingly.

That is something the authorities will prosecute.

It’s time those authorities found themselves on the same side of the muzzle.
Yes, really.

Well, that didn’t take long. No doubt the jury will get the message loud and clear.

We needed to hear from this man.

Nobody had to threaten him. He realized immediately that if he testified he would be incriminating himself. So naturally he refused.

As far as I know no court can immunize a witness. Only the executive branch can do that. And of course it doesn’t want to.

Like virtually all courts, Minnesota courts have stated that this sort of judicial immunity does not exist. Minnesota courts do not have the “the power [ ] to order that a witness’ testimony cannot be used against him” in future criminal proceedings.

But at least one court disagreed (forty years ago). In Government of the Virgin Islands v. Smith, the Third Circuit announced a rule that requires a court to immunize a potential defense witness when (1.) the witness is essential to the defense case, (2.) the witness can offer clearly exculpatory testimony, (3.) the testimony is essential to the defense case, and (4.) when the government has no strong interest in withholding statutory use immunity.

That was an interesting, cursory read …

Um… the DA immunizes witnesses, and the DA is Judicial branch.

Wut? Prosecutors/District Attorneys are part of the Executive Branch of government, either state or federal.

Skipped your government class there, Skippy?

Government class? I wish. They wouldn’t teach me to type, either.

Did a web search for this information to be sure of my claim, and got sandbagged by this webpage — since it was the official statutes of Texas, I took it on faith.

If Judge Cahill were not so weak, would this incident be further justification for a mistrial? The jurors will know about it and they already have substantial reason to feel intimidated.

It is a wonderful appeal issue.

Its evidence to support lack of ability for a fair trial only from the standpoint that qualified expert witnesses are not willing to testify due to fear.

The cardiologist who testified for the state was very full of BS with his statement that a damaged heart was less likely to suffer a heart attack, but he was able to get away with an obviously false statement because of the inability to obtain defense expert

I’m sure the FBI will be all over this….any minute now….they’re gonna get on it….

It’s a good thing they didn’t leave a garage pull on his garage door.

Jury and witness intimidation is much effective than a strong legal case. Hello Maxine….

I think we have passed in many places the point where any reliance can be placed on the “properly” constituted gov’t. Which brings us back to repeat history again.