On Monday, drones might have found a second breach in the reservoir containment wall. 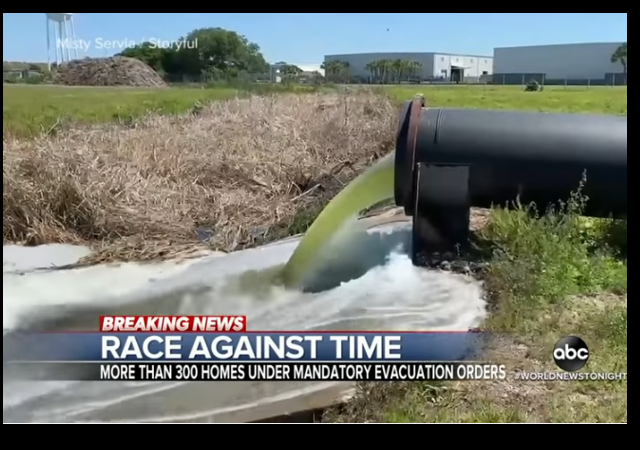 Florida Gov. Ron DeSantis declared a state of emergency this weekend after a leak of wastewater at an old phosphate plant in Manatee County. It threatens to flood roads and burst a system storing chemically contaminated waters.

Officials in Florida ordered more than 300 homes to be evacuated and closed off a highway Saturday near the large reservoir in the Tampa Bay area north of Bradenton.

Residents who live around the Piney Point reservoir received an alert via text saying to leave the area immediately because the collapse was “imminent.” Authorities expanded the evacuation area later Saturday to include more homes, but said they were not planning to open shelters.

The Florida Department of Environmental Protection says a break was detected Friday in one of the walls of a 77-acre (33-hectare) pond that has a depth of 25 feet (8 meters) and holds millions of gallons of water containing phosphorus and nitrogen from an old phosphate plant.

A crack in the lining developed led to concern and the declaration. A breach could unleash a 20-foot wall of water into the surrounding community. County officials indicated that the area’s well water remains unaffected, and there is no threat to Lake Manatee, the area’s primary source of drinking water.

As of late Sunday, progress had been made to address the situation.

The Florida Department of Environmental Protection says the water in the pond is primarily salt water mixed with wastewater and storm water. It has elevated levels of phosphorous and nitrogen and is acidic, but not expected to be toxic, the agency says.

…Early Sunday, officials saw an increase of water leaking out, but Hopes says it seems to have plateaued. The water running out on its own is going to Piney Point creek and into Cockroach Bay, an aquatic preserve in the Tampa Bay north of the facility.

“Looking at the water that has been removed and the somewhat stability of the current breach, I think the team is much more comfortable today than we were yesterday,” he said. “We are not out of the critical area yet.”

Drones might have found a second breach in the reservoir on Monday:

Officials say drones may have detected a second breach in a Florida wastewater reservoir containment wall that could collapse — creating what the governor has called a “real catastrophic flood situation.”

“Engineers from the Department of Environmental Protection are back out at the site now and they’re reassessing that,” Saur added.

As officials work hard to prevent a breach, it is important to note that despite social media rumors. The wastewater is not “radioactive,” but the nutrient levels are such that they will lead to unwanted algal blooms.

“The radiologicals are still below surface water discharge standards. So, again this is not water we want to see leaving the site,” he said.

There are calls for the federal Environmental Protection Agency to intervene.

National conservation group the Center for Biological Diversity also released a statement calling for the US Environmental Protection Agency to intervene.

Two words to remind everyone what happened the last time a Democratic Party EPA dealt with wastewater: Animas River.

Five years ago today, a breach at the Gold King Mine north of Silverton sent a deluge of water loaded with heavy metals into the Animas River, turning the waterway an electric-orange hue that caught the nation’s attention.

But five years later, and four years into the Environmental Protection Agency’s Superfund cleanup program, there has yet to be meaningful improvements to water quality and aquatic life.

It might be worthwhile for the current administration to divert some infrastructure dollars over to address this situation…as it manages an entire infrastructure need instead of paying off lackeys, cronies, and China.

This will be blamed on DeSantis.

It’s just dishwater. The risk is from flooding, not the contaminants.