Need more proof the MSM is tone-deaf and cut off from reality? 60 Minutes keeps lying about the DeSantis hit piece despite the mounting evidence proving the segment wrong. 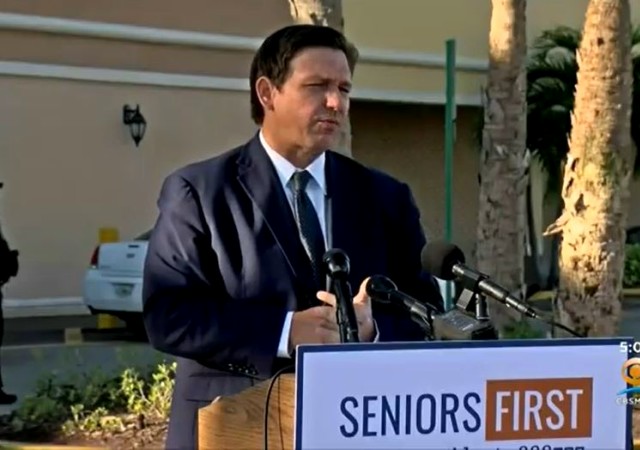 Democrats backed DeSantis. This includes Florida Democrat Emergency Management Director Jared Moskowitz, who got tangled in the crosshairs when CBS News tried to deflect blame onto him.

“When Florida state data revealed people of color were vaccinated at a much lower rate than their wealthier neighbors, ‘60 Minutes’ reported the facts surrounding the vaccine’s rollout, which is controlled by the governor,” a CBS News spokesperson told Fox News. “We requested and conducted interviews with dozens of sources and authorities involved. We requested an interview with Gov. Ron DeSantis, he declined; we spoke to State Emergency Management Director Jared Moskowitz twice, but he declined to be interviewed on camera for our story until well after our deadline. The idea we ignored their perspective is untrue.

“For over 50 years, the facts reported by 60 MINUTES have often stirred debate and prompted strong reactions,” the spokesperson continued. “Our story Sunday night speaks for itself.”

I did speak with @60Minutes. Never said I didn’t. They were very nice, but I told them that the @publix story was “bullshit”. Walked them through the whole process.The fact that I didn’t sit down on “camera” because I am responding to a 100 year emergency doesn’t change the truth https://t.co/G7QNsV42V5

60 Minutes associate producer Emily Gordon emailed a list of questions for the governor to DeSantis communications staffer Meredith Beatrice on Wednesday, March 31. Gordon said the segment would air that Sunday and needed answers by Thursday evening.

Fox News continued (REMEMBER! CBS had the option to interview Moskowitz on Skype):

The “60 Minutes” producer replied that they had requested an on-the-record interview with Moskowitz “repeatedly” since February and claimed that he had not responded to messages since mid-March.

DeSantis’ office stressed that it was “important” for CBS News to interview Moskowitz and Palm Beach County Mayor David Kerner, who Zill de Granados said was not responsive to inquiries.

“Thank you for your input. Unfortunately, the deadline has passed,” Zill de Granados told Beatrice on Thursday afternoon. “As you may know, the Covid pandemic makes our interview protocol much more complicated and time-consuming due to new distancing and testing requirements for correspondents and camera crews.”

However, that standard appeared not to apply to Florida State Rep. Omari Hardy, a DeSantis critic who “60 Minutes” correspondent Sharyn Alfonsi interviewed remotely.

“Luckily, we have already spoken to Director Moskowitz several times,” Zill de Granados continued. “We appreciate his perspective on the roll out in Florida. We have included the information he provided on background as it pertains to this story”. Zill de Granados also noted that Moskowitz had been asked to do on-camera interviews on Feb. 28 and March 1

“Did you see the perspective that the person in charge of the Covid response told them how Publix was selected in their agency and that the contribution story was garbage?

“They ran with pay to play, when I told them it was done by my agency and why and how. Did you see that perspective?” Moskowitz added.

This is just the first in a long line of hit jobs on the way for DeSantis. Next will be sex or sex-soliciting related.

The mainstream media has their orders, and their financial backing isn’t coming from us.
In saner times, a competing network would investigate CBS and enjoy the fruits of increased viewership…but the deafening silence tells me their orders and financial backers are one source for all of them.
I wonder….just who could it be?

There is a (Blasey) Ford in his future.

Geez, I hope you haven’t driven one of *those* lately…

Any person with a modicum of rationality understands that the Dhimmi-crat media outlets are entirely agenda-driven and that their lackeys are gleefully promoting Dhimmi-crat narratives and talking points, while vilifying conservatives and displaying total disregard for notions of fairness, objectivity and facts.

CBS’s rebuttals to legitimate criticism of this transparent hit piece on DeSantis are weak and unavailing.