You can tell the mainstream media fears DeSantis 2024, they are trying to damage him early. 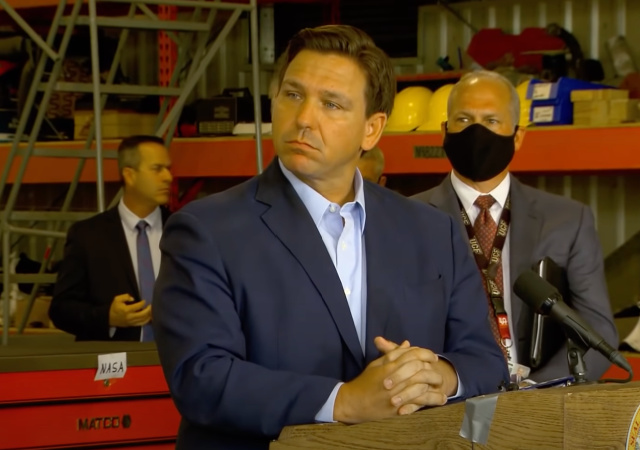 Did CBS listen to the criticisms? No. The full report came out on Sunday with the midleadingly edited clip. Publix and Democrat Jared Moskowitz, Director of the Florida Division of Emergency Management, slammed 60 Minutes due to the fake news in the report and interview.

60 Minutes claimed DeSantis engaged in a “pay for play” scheme with Publix, a huge grocery store chain in Florida. It has over 800 locations in the state. Alfonsi claimed DeSantis gave Publix a contract to distribute vaccines for a $100,000 donation.

"What you're saying is wrong," Gov DeSantis tells Sharyn Alfonsi in response to a question about whether the Publix grocery store chain gained influence through a campaign donation on his behalf. "It's wrong. It's a fake narrative," he says. https://t.co/gyrW9hYPTg pic.twitter.com/5rBq7v5VOA

Alfonsi continued her narrative in her report despite people, including Democrats, shoving facts in her face. Moskowitz shut down false claims about DeSantis and Publix in early March.

@60Minutes I said this before and I’ll say it again. @Publix was recommended by @FLSERT and @HealthyFla as the other pharmacies were not ready to start. Period! Full Stop! No one from the Governors office suggested Publix. It’s just absolute malarkey. https://t.co/obkqYcbrzt

This is Jared Moskowitz, director of the Florida Division of Emergency Management. He’s a Democrat, served as one in the state legislature until 2019, and campaigned for Gore and Obama. He’s not falling for this absolute garbage, and neither should you. https://t.co/Ng3pyNI87W

Publix said: “The irresponsible suggestion that there was a connection between campaign contributions made to Governor DeSantis and our willingness to join other pharmacies in support of the state’s vaccine distribution efforts is absolutely false and offensive. We are proud of our pharmacy associates for administering more than 1.5 million doses of vaccine to date and for joining other retailers in Alabama, Florida, Georgia, South Carolina, Tennessee and Virginia to do our part to help our communities emerge from the pandemic.”

No one will listen. They are determined to expose a non-existent scandal in Florida while Democrat Gov. Andrew Cuomo faces numerous scandals. DeSantis did what he could to save elderly residents. Cuomo’s policies led to unnecessary elderly deaths.

Interesting that 60 Minutes “forgot” to mention that Publix gave $100,000 to Democrats as well.

These people want a scandal in Florida. They know DeSantis will lead the charge in 2024.

And as Lindsey points out, it’s not just a lie, it’s an incompetent lie, based upon a total misunderstanding of the process, the selective editing of a video that contained a full explication, and the conscious withholding of information such as this: https://t.co/ntbqJUR3Ju

I honestly feel sorry for people who are so unable to control their political priors that they simply can’t fathom that Florida has done fine, but that’s ultimately their problem, not Florida’s. If you’re one of these people, know this: It’s not too late to stop spreading dross.

The last thing I’ll say is this: This is Nikki Fried. She’s the agriculture commissioner, and likely Democratic nominee for governor in 2022. This is unforgivable demagoguery from someone who knows better. Unlike Moskowitz, she chose to disgrace herself. https://t.co/Bx1OAwO0AQ

Media sources and the Democrats are operating with impunity and extreme bias. Really makes me think that they have the “fix”.
It will take far more than griping to right this swamped boat.
Will we have the fortitude to pursue the remedy, or will we cower in fear of the mean things “they” will say?
Gosh, they pulled all the stops because Trump’s tweets were “mean”….and look what is happening.

A strongly worded statement, condemning the actions of the left just won’t cut it, and it is obvious that voting isn’t a viable option anymore. They are itching for a fight, and we need to bring them that fight. I’m not suggesting to run armed into the streets, we need to confront those that support this insanity on a daily basis and make it clear to them that we are not their friends, and will never submit to the totalitarianism they are pushing.
If it is okay for Maxine Waters to suggest it, then it is acceptable for us to return the favor.

The narrative matters more than the truth to them (or ‘Dem take your pick). It could very well be they are trying to destroy DeSantis before he even starts to run (if he does) because considering how quickly his star is rising he could be a strong contender in 2024. Alternatively if they take out DeSantis and get a Dem to replace him as the next gov in Florida then Republicans could very well lose a critical state for national elections. Well the Dems would have to get the legislature too down there but taking the governorship would be enough to cause a lot of trouble.

Why run when
You know the fix is in?

Nikki Fried is the narcissist who slapped her photo on every gas pump in Florida before she was told she couldn’t do that. Then we had to pay for replacement stickers. Thanks, “Nikki.”

I’m absolutely shocked at this. Shocked, I tell you!

Seriously, though, why would any conservative politician assist “60 Minutes” or any of the other propaganda arms of the party of idiot wokists? There’s no way a balanced or objective will be aired.

I expect the Franz von Papen Republicans to start expressing “concern” about DeSantis and call for an investigation.

The question is: who will go first? Mitt Romneycare? Marco Rubio? Mitch McConnell? Susan Murkowski? Who will win the von Papen Republicans’ most coveted prize of a bored compliment from the NYT?

And now Gov. DeSantis and Publix should sue CBS and the media people (won’t call them journalists or reporters because they are not either) for $1 billion dollars for the slander and lies they broadcast on that day. They should be forced to prove their allegations in a court of law or pay up. No proof then they need to pay up for their wild accusations and allegations.

If Dominion can do it then so should Publix and DeSantis. Goose meet gander.

This is just the opening salvo in a long, sustained barrage against DeSantis. It will go from this, to pay to play, to underage women, sexual harassment, the works.

I hope he’s clean and ready, because even if he’s clean, they’re still going to throw everything at him.

My favorite bit of hit-piece propaganda against de Santis was by (I think) NBC or CBS, attacking him because he prioritized elderly citizens in distributing vaccines.

As if we don’t all know by now that the elderly are the most vulnerable population with regard to the Wuhan virus bioweapon. These media propagandists were attempting to spin this common-sense move as an allegedly “political” decision. Idiots. The media lemmings are vile, just like the Dhimmi-crats whom they gleefully serve.