“Maybe the captain made a mistake in a specific (operation) request, such as the rudder or speed, which could have led to that.” 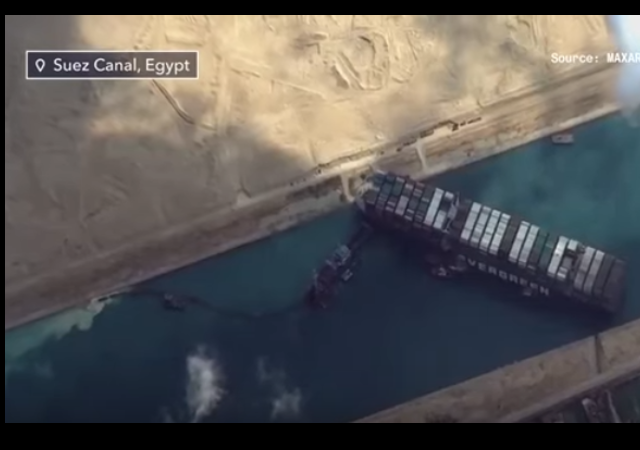 The saga of the “Ever Given” continues, even after the massive cargo ship was freed from blocking Egypt’s Suez Canal and severely impacting global trade supplies.

The ship remains in the canal. Egyptian authorities seized it until the owners agree to pay $1 billion in compensation.

“The vessel will remain here until investigations are complete and compensation is paid,” Lt. Gen. Osama Rabie, who leads the Suez Canal Authority, told a local news station on Thursday, according to the Wall Street Journal.

“We hope for a speedy agreement,” he said, adding that the “minute they agree to compensation, the vessel will be allowed to move.”

Egypt is trying to recover the costs associated with the equipment used to dislodge the ship, the labor force that worked on the boat, and the damage done to the canal. Egyptian officials have initiated an official investigation into the incident.

The Suez Canal Authority hasn’t said how Mr. Rabie arrived at that figure, including how much it spent to free the vessel. The blockage cost the Egyptian state $95 million in lost transit fees, according to an assessment by Refinitiv, a financial analysis firm in London. But Egyptian officials also said they would recoup the lost income when they restarted traffic through the canal.

Accidents involving large container ships can cause property claims of over $1 billion, according to credit rating agency Fitch Ratings. Insurers covering the Ever Given will face claims over losses related to perishable goods and supply-chain disruptions and from the Suez Canal Authority for loss of revenues, Fitch has said.

Mr. Rabie has said he wouldn’t rule out a lawsuit, but prefers to settle the matter of compensation outside of court.

While the investigation into the incident continues, officials at the Suez Canal Authority have suggested a possible mistake by the captain of a container ship as a probable cause of the incident.

“Maybe the captain made a mistake in a specific (operation) request, such as the rudder or speed, which could have led to that,” Osama Rabie said in a recent interview, in reference to the skipper of the 400-meter-long, 220,000-ton Ever Given.

Even though a Suez Canal Authority guide was aboard the Ever Given, Rabie said the authority bears no responsibility for the incident, which he has estimated could incur more than $1 billion in damages.

The guide has “a consultative role” but the captain “is responsible for (operations of) the ship,” he said, speaking in Arabic.

“Even when orders are issued by the guide, the captain has the right to change them or use any route or speed other than what the guide says,” Rabie said. “There was no error or responsibility on the part of the Suez Canal.”

No matter the outcome, I am truly grateful that the Egyptians moved the ship, and no toilet paper crisis is looming.

I love it, but lots entities have also suffered economic damage.

Now, if China tries to take the ship or canal by force, we could step in for a 51% open ended share of the operation.

That “maybe” is telling. It smells of Egypt’s officials trying to save face by implying an accusation while technically-kinda-sorta-but-not-really not outright lying.

Did they get their Dr. Evil voice out for the occasion? “One Beeelion dollars!”

Frankly, the shipping company is probably better off going “Ok, you keep it. Bye.”

It would also be amusing. They’d not know what to do with it.

That’s likely correct. But, the owners of that ship have other ships and Egypt would likely deny passage for all their ships forever.

Also it looks like Egypt took a page from Trump’s Art Of The Deal and asked for a super high amount to start negotiations. I can’t see the shipping company or any insurance companies involved willing to pay that much.

I think the fee is a great idea. helps prevent future captains and shipping companies from making stupid navigational mistakes. Possible mistake, possibly winds, but I suspect that more attention to details would prevent future mishaps

For that price, just decommission the ship and build a new one.

‘Suez 2’? Ever Given grounding prompts plan for canal along Egypt-Israel border:

The new canal can have as a sales slogan: “Use our canal – or get gyped in Egypt!”

Like many important waterways, the Suez Canal requires transiting vessels to take on a pilot. This is to ensure that ships passing through the canal have someone onboard with experience of navigating the 673-foot wide passage.