DeSantis Signs Anti-Riot Bill, Vows the ‘Mob’ Will Not ‘Win the Day’

DeSantis Signs Anti-Riot Bill, Vows the ‘Mob’ Will Not ‘Win the Day’

“If you riot, if you loot, if you harm others, particularly if you harm a law enforcement officer during one of these violent assemblies, you’re going to jail.” 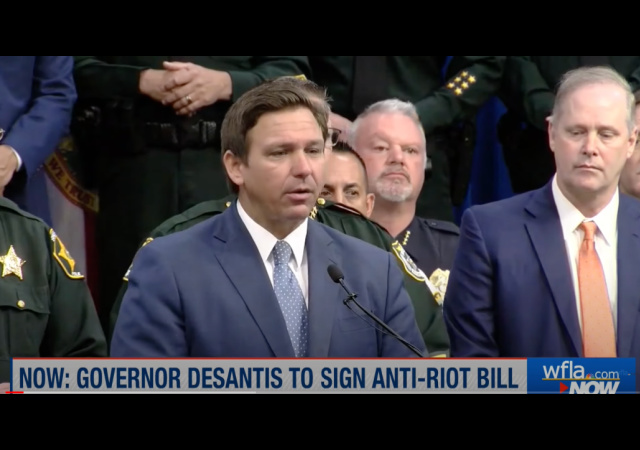 The bill, which covers 61 pages, makes several changes to Florida criminal and administrative law, and will:

Riots, violence, and vandalism continue in Portland, OR, and Brooklyn Center, MN, after a cop allegedly killed Daunte White, a black man.

DeSantis proposed the law in 2020 after George Floyd’s death in Minneapolis, MN.

“If you riot, if you loot, if you harm others, particularly if you harm a law enforcement officer during one of these violent assemblies, you’re going to jail,” continued DeSantis.

DeSantis is not fooling around: “If you’re derelict in your duty as a local government, if you tell law enforcement to stand down, then you’re responsible for the damage that ensues. And if someone’s been harmed or their property has been destroyed, then they can sue you for compensation.”

Florida Democrats all of a sudden care about the First Amendment and worry it “will suppress nonviolent demonstrations and minority voices.”

In the last few years, riots have been encouraged by elected officials. who either claim that there is no rioting or that there’s nothing they can do.

The unaccountability of elected officials is a severe problem. This law is a good first step in the right direction. It’s not much more than a baby step but it’s better than no steps at all.

It looks so good to see governors who have a spine and are willing to stand up to anarchy. Too bad we no longer have a president who can be described similarly.
.

“If you riot, if you loot, if you harm others, particularly if you harm a law enforcement officer during one of these violent assemblies, you’re going to jail.”

That’s good, but the fact is that looters should be shot on sight. Looting is one of the most insidious crimes that can infect a society and it is a crime that specifically targets society when it is at its most vulnerable and brittle. Because of this, looting must be dealt with swiftly and mercilessly so that no one ever thinks that times when society is weak are times to prey on it. No society can withstand that sort of attitude among even a small percentage of the population for any period of time. Looting is a cancer that must be stopped immediately.

I agree with you 100% this goes double for arsonists.

A link to the bill would be nice so that FL residents can see who voted against it.

But it omits party affiliation.

I like that this bill actually incentivizes local government (mayors, city councils) to actually give a damn about public safety lest they find themselves on the receiving end of one or more lawsuits. That alone will make some of them think twice about letting these riots proceed.

FL Dims worry that the bill “will suppress nonviolent demonstrations and minority voices” thus admitting that they think minorities can’t express themselves without being violent.

9th Circuit Court will rule it unconstitutional or some horseshit, you watch

Such a ruling would have to come from the 11th Circuit, which includes Florida. The 9th, fortunately, has no jurisdiction over this issue.

Those who prefer mayhem and disorder will not be happy.

This is the best feature of the bill:

“Allow those local governments to be sued if they fail to stop a riot” (If it’s drafted well and not vague.)

I wonder if Ron would consider summering up here in Michigan.

Can someone be governor of 2 states at the same time?

Amen. He’s doing great work in Florida. He’s surprising me in a positive way every week.

Just move to Florida….AND no State Income Tax there!

Florida is looking better and better as a place to live.

The longer we tolerate these corrupt losers, the deeper we dig our own graves.

DeSantis 2024
(after Dominion is swept away)
Can we hang on that long?

I agree on principle, but what happens if DeSantis loses re-election in future and the dems then use this law against conservatives and 2A groups peacefully protesting? (Since they view the right as violent).

Possibly getting a bit late to deal with this stuff now.

The progressive fascists don’t need this law to persecute conservatives. They ignore laws and the constitution as it is.

This law gives local police and prosecutors more power. Rioting was never legal. It happened unabated where police and prosecutors didn’t do their job using existing law. I’m not sure how this changes things. A police force run by a leftist mayor and city council can still sit by and watch as a politically approved riot takes place. Assuming leaders aren’t personally criminally or civilly responsible, why would they care if the city is sued?

Magnificent! Every day I thank God that even if I have to live in Joe Biden’s America I can still live in Ron DeSantis’ Florida.