“Fendley’s fiance, Kevin Holtry, is a cop who caught five bullets in the line of duty, making him wheelchair-bound” 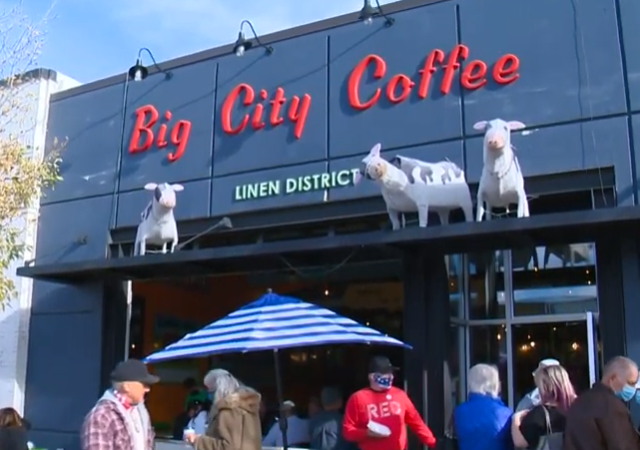 Big City Coffee had a contract with Boise State University in Idaho to operate an extension of their shop on campus. When students found out about the owner’s support for police, they allegedly pressured school administrators to close the shop.

Now the owner is taking legal action against the school.

A coffee shop owner who left Boise State University last year after activists complained about her support for police has filed a tort claim against the college seeking $10 million in damages.

The March 24 claim, which is a precursor to a lawsuit, alleges slander, contract interference, fraud, and violations of constitutional rights, among other things.

Sarah Jo Fendley is owner of Big City Coffee, a shop in Idaho’s capital city that closed its brand new extension on the Boise State campus in October 2020.

It was widely reported at the time that the closure happened because of Fendley’s support for Thin Blue Line, a nonpolitical campaign to support police officers.

Fendley had expressed support for police officers for two specific larger reasons, according to the claim.

The first reason is that “As a single woman running a business in a sometimes rough neighborhood, the police have assisted her in many potentially dangerous situations over the years and she is appreciative of such assistance,” the claim states.

It also notes that Fendley’s fiance, Kevin Holtry, is a cop who caught five bullets in the line of duty, making him wheelchair-bound.

Jacob Scholl of the Idaho Statesman has more:

According to the tort claim, Fendley borrowed $150,000 to equip the campus location and train staff, all while maintaining the downtown shop. Big City Coffee later signed a contract for food and beverage service through Aramark — which handles such services on the BSU campus — on Aug. 17, and the shop opened in September 2020. Big City asserts that Thin Blue Line flags and other law enforcement-related materials were not displayed at the campus coffee shop.

Big City Coffee’s attorneys say they obtained emails showing that some campus officials were discussing “the potential for controversy” between campus groups and the coffee shop as early as July 2020. If Fendley or others had been made aware of this or known that a student group began to raise concerns, Fendley might not have not opened the location, according to the tort claim.

In October, Fendley became aware of a social media message that called for a protest of Big City Coffee for displaying Thin Blue Line messaging at the downtown location.

It’s a shame that this shop owner has to resort to legal action, but this is what must be done.

Schools and the left-wing students they constantly coddle must be made to feel the consequences of their actions.

It is gonna take some time. Neither the school administration nor the students have any concept that either civil or criminal law can be applied to them/. The idea is beyond their ken and experience. And a certain percentage of their legal counselors are the same way.

The amount of shock at the fact the world does not necessarily bow down to them will be major. Someone is going to have to sit them down gently and explain things to them. And they will claim psychological trauma.

Granting that under the current regime, laws are malleable; but this should be interesting.

I suggest the campus remove all police and not allow any police to investigate crimes on campus. Let the school provide “rangers” and let the crime spree begin. Until the students and staff get a wake-up call from reality this will continue.

Can she sue individual students? That would be awesome. Add attorney’s fees onto their college debt.

“But it was virtue signaling! It should be free, and come with no consequences!”

I was recently at a restaurant that had only single stall bathrooms, so each bathroom was for whatever the customer identified as at that moment. The cost of breaking the multi-user bathrooms into individual bathrooms was not ridiculously expensive, except in terms of giving up some stalls. Instead of six stalls, they now have 4 bathrooms. And they no longer have “fainting couches” in the ladies’ room, because there is no ladies’ room.

When I’ve been at our local Tim Hortons, if a lady is waiting and the men’s room is vacant I’ll suggest they go into it. It’s only a toilet and wash basin. The only reason I can think they title the bathrooms is because women are messier in there than men.

This concept has worked out just fine at every RV park where I’ve ever encountered it, especially when the women are lining up for showers that would be otherwise vacant on the men’s side. Single-line-multiple-servers is a well-understood process optimization.

It would be interesting to find out just how many students are actually part of the “student group” that got its knickers in a knot and “complained loudly” to the administrators. There are what, 22,000 or so undergrads enrolled. There were probably only 10 to 20 students in the “group” that went whining to administrators, who caved to them instead of offering to help them transfer to another school.

Just think how much the school will end up spending to defend against this suit, even if they end up winning. The students, and the administrators need to have pointed out to them that the students are only temporarily attending the school and they don’t run it.

Unfortunately, they don’t (think of that) because it’ll come out of some endowment. They’re only interested in their “woke” credentials.

Contrary to “profit is king”, “money talks” and the more recent platitude “get woke, go broke”, it’s becoming increasingly obvious that most major corporations and private organisations are willing to take a significant write down for the sake of ideology.. Exhibit A is the number of diverse remakes coming out of Hollywood: they almost all bomb and yet they don’t stop coming. And how was Gillette actually expecting to make *more* money following an ad calling out its entire potential demographic, with a particular focus on its primary potential demographic of white men? At no point, during some of these political adverts, do they ever attempt to sell you a product!

“The students, and the administrators need to have pointed out to them that the students are only temporarily attending the school and they don’t run it.”

I think this is an unreasonable expectation. All these administrators, with all their fancy credentials, have yet to figure out this simple truth, despite having had 50 years to do it.

Tyranny of the dozen.

I guess Starbucks can come in, BLM shirts and all.

At least the “student” non-customers will have a bathroom they can comfortably shoot up in, without having to worry that an employee will kick them out.

Even Boise? It’s time to end colleges forever. There’s really no more use for them, now that we have books.

College degrees are becoming more and more useless. Employers are demanding to see examples of analytical or writing products, references from internships, work experience, etc., unless you attended a school and program within that has known standards and selectivity. This is why you are seeing the divergence in the value between STEM and non-STEM degrees.

There are now vast numbers of people with college degrees in jobs that do not require them. Some of these positions pay fairly well, I know a guy who does very well as a sales manager at local car dealership. They move lots of metal and he is paid well, but you really do not need a college education to sell cars or manage a modestly sized sales force. A lot of people are simply wasting time and money in college these days.

Four year degrees used to be for the children of rich people who did not need to earn a living. Those not so blessed took courses they thought they needed to improve skills in the work place. Law school used to be something that simply helped you pass the Bar exam. Law degrees were not required. The only degree my father had was a medical degree. He did not graduate from either high school or college, and degrees were not required for acceptance to higher levels of achievement. You just took the courses you needed and moved on with life. His father was an intenerate farmer. His urge to eat superseded his desire to either study unnecessary subjects or lounge around a college campus in a drunken stupor.

Now we go trillions of dollars into debt prolong adolescence, miseducate our youth, and instill in them a profound misunderstanding of the requirements and urgency of living a productive life.

They shouldn’t forget to sue any identifiable activist organizations that participated in the lobbying for the shop’s removal from campus.

Shades of the Gibson Bakery case, when I read this post. The Dhimmi-crat totalitarians are everywhere, infecting every facet of American society, like a cancer.

I see the last news item on the Gibson Bakery case was in November of last year, regarding the appeals court hearing argument. I assume a decision will be handed down sometime soon.