“I’m of the point of view that I still think the most likely etiology of this pathology in Wuhan was from a laboratory — escaped.” 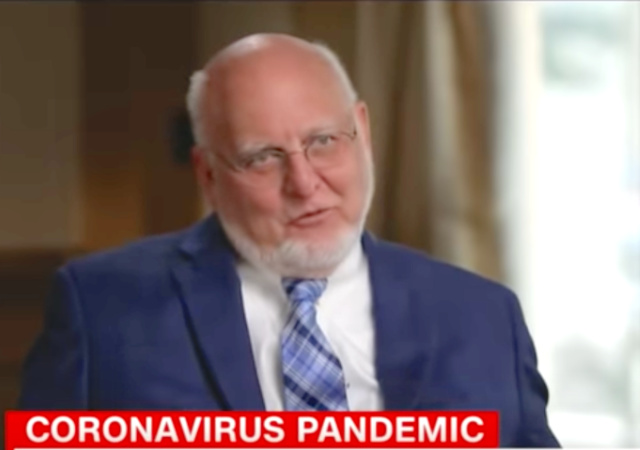 In January, the U.S. State Department reported that it has new information indicating the pathogen behind the COVID-19 pandemic could have emerged from a Chinese laboratory in Wuhan.

The Centers for Disease Control and Prevention’s (CDC) former director indicates that he believes the virus that causes COVID-19 escaped from a lab in Wuhan, China.

Robert Redfield told CNN on Friday that it was his “opinion” that SARS-CoV-2 — the new coronavirus responsible for killing 2.7 million people globally — did not evolve naturally.

“I’m of the point of view that I still think the most likely etiology of this pathology in Wuhan was from a laboratory — escaped,” said Redfield, who led the CDC during the height of the pandemic. “Other people don’t believe that. That’s fine. Science will eventually figure it out.”

…“It’s not unusual for respiratory pathogens that are being worked on in a laboratory to infect the laboratory worker. … That’s not implying any intentionality,” Redfield said. “It’s my opinion, right? But I am a virologist. I have spent my life in virology.

The American media, which has abandoned all objectivity and reason as demonstrated by the Biden press conference, constantly repeats the Chinese-preferred narrative that researchers and “experts” believe the animal-based pathogen evolved and was spread via the Wuhan wet market. Redfield is skeptical of these claims and offers an intriguing timeline based on his experience:

‘I do not believe this somehow came from a bat to a human and at that moment in time the virus came to the human, became one of the most infectious viruses that we know in humanity for human-to-human transmission,’ he said.

‘Normally, when a pathogen goes from a zoonot to human, it takes a while for it to figure out how to become more and more efficient.’

He believes it started in a lab that was already studying the virus, which would mean COVID-19 was being exposed to human cell cultures.

Redfield also said he believes the virus started circulating in Wuhan as early as September 2019, which is several months earlier than the official timeline.

‘If I had to guess this virus started transmitting in September/October in Wuhan. That’s my view… I’m allowed to have opinions,’ Redfield said.

Legal Insurrection readers, however, have been aware of the report since mid-February. On February 16, I covered the paper in my piece: Chinese university researchers believe virus may originate from government laboratory.

So it may be that a sloppy scientist failed to follow proper decontamination protocol before exiting the laboratory. This is especially troubling as researchers who work in the highest level of biosafety containment must undergo vigorous training before using such facilities.

…The full report is here, including this conclusion:

In summary, somebody was entangled with the evolution of 2019-nCoV coronavirus. In addition to origins of natural recombination and intermediate host, the killer coronavirus probably originated from a laboratory in Wuhan. Safety level may need to be reinforced in high risk biohazardous laboratories. Regulations may be taken to relocate these laboratories far away from city center and other densely populated places.

When will he have his tragic accident?

Per chance a robbery without theft.

Or a suicidal shotgun blast to the back of the head. As a final insult, his demise will be classified as a COVID death.

Not suicide with two shots to the left temple and he’s right-handed?

Of course it came from the lab in Wuhan. Let’s see – bat woman running around China collecting bat coronaviruses, then conducting gain in function experiments on them to see how they would need to mutate in order to infect humans, in a poorly and unsafely run BLS-4 lab, funded by Dr. Fauci, be the way,

Nope, you must believe it came from a wet market a few hundred yards away, or be ridiculed and cancelled even though there is no evidence the virus was ever there, but we know the virus was at the lab and being manipulate to infect humans, because they published their research on it.

Even if release was accidental, subsequent actions were clearly malicious.

This is why I like reading conservative websites. You learn things that get officially denied for months or years before being grudgingly admitted. And you knew it all from day one.

Dec 7, 2018 is WuHan Day, a day that will not live in infamy because we love our Chinese overlords. Where else would we get all our stuff? We took action in 1941 when the USS Missouri was sunk, but when an attempt is made to sink our whole country………………….

“Where else would we get all our stuff?”

The same places we did before Richard M. Nixon, Republican, and his sidekick Herr Doktor Heinrich Kissinger sold us out.

Herr Doktor Henrich Kissinger? I’ll have you know that man is as American as apple strudel.

The Missouri was not sunk at Pearl Harbor – or anywhere else, for that matter.

In fact, Imperial Japan signed the surrender documents on the deck of The Might Mo. It’s now a floating museum in Hawaii

The Germans bombed Pearl Harbor so no doubt it was a Kaiser roll.

Should have looked it up. the actual quote is, “Forget it. He’s rolling.”

The Missouri (BB63) wasn’t sunk at Pearl. It wasn’t even launched until Jan. 29, 1944. (And no other ship by that name was sunk 12/7/1941. The USS Missouri Memorial, as the ship is now designated, is not to be confused with the USS Arizona Memorial.)

So he’s saying it’s the China Virus. Where have I heard that before?

This has been the prevailing theory for those paying attention to the evidence since Q1 .. of last year.

This is not new, and it is still the theory that fits the evidence the best.

He’s probably right, but I can’t trust anything he says because he claimed last year that cloth masks were better than vaccines to stop covid transmission.

“Regulations may be taken to relocate these laboratories far away from city center and other densely populated places.”

This is not a bug, it’s a feature. The lab is located where it is for the specific purpose of being near a wet market. Markets of all sorts are usually sited where people live, to permit access to the largest possible number of customers.

The lab, OTOH, was intentionally sited near the market so that the market could be used to provide plausible deniability should a zoonotic pathogen escape confinement. In the Chinese government’s calculus of such matters, it is better to have a handy scapegoat nearby than to position the facility in a safer location, but one that does not provide cover for mistakes.

Funny how the Chinese Communists locked down Wuhan and quarantined it from the rest of China while still allowing international air traael to/from Wuhan.

And what a coincidence that Covid-1984 was perfectly timed to give American Communists the tool they needed to rig and steal the election from Trump. And that the Chinese Communists very badly wanted him to lose the election.

I suppose I should now expect a visit from America’s Stasi for daring to suggest such a dangerous ‘conspiracy theory’, at the behest of the Chinese Commies.

Because America is no longer the free country it once was.

1. I am shocked CNN let him say this.

2. CNN did try to spin his upcoming interview as “Former CDC Director Under Trump says he can finally speak freely about the origins of the virus” (as if Trump was complicit in some kind of coverup to help China…bah)

It pretty much had to have come out of a lab, and most likely a virology lab in or by Wuhan. But may not have been out of their BSL 4 virology lab, 2 miles from the wet market, but instead maybe the BSL 2 virology lab right next to the wet market. Or, apparently there is also supposed to be a PLA military lab.

There are a lot of reasons to believe that the SARS-CoV-2 virus is semi manufactured. There is no evidence left in the virus of where or when it jumped the species barrier. Instead, it appears to have suddenly emerged with spikes optimized for human ACE2 receptors. That cross species jump should have shown genetic debris. It didn’t. Moreover, a virus that well adopted to humans must have been in circulation in humans to develop that optimization. Yet, there is no evidence of this virus, nor anything that close, before sometime in the fall (Sept-Nov) of 2019. Immaculate Conception.

Another oddity is that the virus appears to have had pieces from other, very distant, viruses grafted onto a relative of the original SARS coronavirus. This can happen naturally, when two viruses have infected the same cells. This though was very clean, again not leaving the genetic residue, or again, the actual samples, if it had occurred naturally.

Two major theories about how the virologists in Wuhan created the SARS-CoV-2 coronavirus. One, pushed by a Taiwanese virologist is that it was created through gene editing, using well known tools like CRISPR. She laid out the steps that she said would lead to the virus, as well as how long it would take her. The other is using pushed evolution, very likely using a human cell medium.

It does appear that Dr Fauci’s Center for Infectious Diseases helped fund this sort of research after it could no longer be done in this country. The question then is whether any US research money went into developing the SARS-CoV-2 coronavirus, as well as who knew about it. Did Fauci know himself, or was it just his underlings?

Oops no it isn’t…was thinking of a different designation.

One more thing…I think if it was pushed evolution it would still leave behind genetic remnants of the jump, right?

The release was no accident. This is an attack on the entire world by communist china.

They deserve nothing short of nuclear destruction.

It was obvious early on that the Wuhan lab was the most likely source and it was also widely known early on that FAUCI was the one who circumvented U.S. defunding of Gain Of Function research on Coronaviruses by outsourcing that easily weaponizable research to our Communist enemies at Wuhan.

There is no way Redfield didn’t know all of this, and as the ONLY Republican in the entire medical bureaucracy should have told Trump about Fauci’s compromised position and advised that Fauci needed to be fired.

But like Jeff Sessions Redfield proved to have no balls and stood by as Fauci was given the reins for dealing with the huge and deadly mess of his own creation.

Redfield can’t take any heat at all and never should have been in the kitchen.