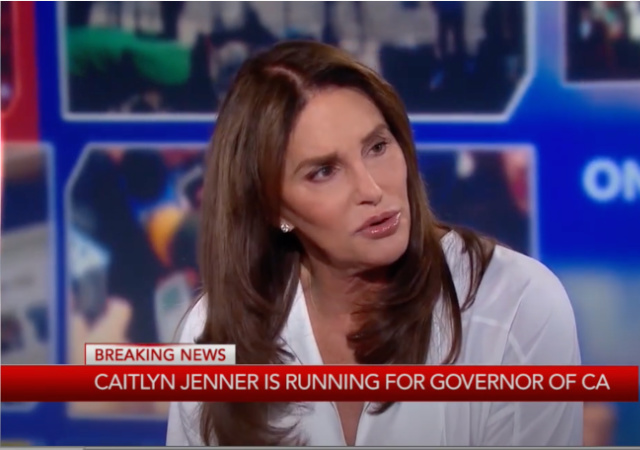 Caitlyn Jenner, a Republican, announced she is running for governor of California.

Jenner wants to replace Democrat Gov. Gavin Newsom in a recall election. Rumors swirled earlier this month she planned to throw her hat in the ring.

Californians want better and deserve better from their governor. For too long, career politicians have over-promised and under-delivered. We need a leader with a vision and the resolve to see it through. This will be a campaign of solutions, providing a roadmap back to prosperity to turn this state around and finally clean up the damage Newsom has done to this state.

Small businesses have been devastated because of the over-restrictive lockdown. An entire generation of children have lost a year of education and have been prevented from going back to school, participating in activities or socializing with friends. Taxes are too high, killing jobs, hurting families, and putting an especially heavy burden on our most vulnerable people.

This isn’t the California we know. This is Gavin Newsom’s California, where he orders us to stay home but goes out to dinner with his lobbyist friends.

I’m in! California is worth fighting for. Visit https://t.co/a1SfOAMZQ3 to follow or donate today. #RecallNewsom pic.twitter.com/9yCck3KK4D

Jenner always distanced herself from President Donald Trump, but has taken in some GOP operatives from his campaigns. From Axios:

Should at least be entertaining to watch the CA Dems struggle with conflicting emotions as they demonize a member of one of their protected classes.

It’s all only about power and this should illuminate that point well.

You likely mean well, but, -lease, don’t combine the two like we are interchangeable. We are not. I am homosexual, and don’t know why; it just IS. I am not chopping off my genitalia and taking hormone shots. I just live my life. Again, we are not the same.

I feel for you, Griz. One of my old co-bloggers at Ace of Spades (Gabriel Malor) put it very eloquently…..”You think it’s tough coming out as gay to your conservative friends and family? That’s nothing. Try coming out as a conservative to your gay friends.”

If one of my friends tells me “I have same sex attractions”, I cannot argue with them because they are telling me how they feel. But if the same person tells me “I was born a man, but I am now a woman”, well, shit Tex. That is just delusional.

Yet more evidence that 2020 was not a one-time never-happen-again dumpster fire.

No such thing was presented in this article and I am starting to think you aren’t black pilled at all but a Democrat on a Republican page here to try to persuade everyone not to vote.

Why are you leftists always so angry?

So you’re suggesting that we should accept it as “normal” that a person who is so confused about their own identity that they want to mutilate their genitals is presented as being qualified to lead our society?

Does having a demented, senile POTUS like Gropey Joe move the Overton Window on this topic that much, that quickly?

Did Senile Gropey Joe move the Overton window? I dunno, but Kamala did. She opened it up, lowered about two feet and jumped through. Landing on top of Gropey Joe, she ripped off her mask and yelled, “Giddyup!” And Ole Joe has been carrying the both of them ever since. But poor old tired worn out senile Joe can’t run much further.

The first thing I did was look up if this person is legally a female. I am still not clear on how this happens….

I can honestly say that I can’t imagine a better representative of the state of California. And I use the word ‘state’ in every sense.

She would not be the worst qualified person to ever hold the office.
Caitlan for California: because were tired of Politicians dicking around!

I’ll join the word-play: “she” may be subject to outbursts and ovary-acting to situations.

Sure, why not. The head of Health and Human Service is a trans/neo-female (i.e. pseudo-feminine gender). That said, throw another baby on the barbie and follow the pride parade. That is lions, lionesses, and their cubs.

This story doesn’t even take being black pilled to be skeptical.

Trump won without looking it up I think a third of CA, so clearly hiring his people doesn’t mean much in CA.

I don’t know of any evidence CA is changing in any way either, or that Jenner could turn enough Democrats to win like Baker did in MA.

The money going into the campaign could be going in to buying some major culture magazines for women, or a major film studio (CA airwaves are expensive).

Caitlyn Jenner may have the money to burn, I am only suggesting there are more helpful ways to spend it instead.

I hope I’m wrong and California is changing but as of right now I know of no evidence for that and some evidence against it (such as the 2020 results).

What is the day when OJ lectures us about looking at all the evidence in an attempted knife murder and a former olympic transvestite is probably the candidate to govern California.

CA can definitely do worse than Bruce, and has repeatedly throughout the years.

It’s good to see women getting into politics.

Quite the interesting set of choices for the voters of CA. Even more interesting if R Grenell enters the contest.

How will the folks committed to the false doctrines of the d/progressive narrative of woke and oppression and patriarchy and gender and exclusion make a choice?

The world’s greatest athlete preparing for another decathalon. Runs a better race than most men. Would make a better governor than Arnold. I know, I know, that’s not saying much, but what do I know? I don’t live in California.

This is about the best we the sane people could expect from Cali.

Why does Bruce Jenner think he has to run for Governor? He can just pretend he’s Governor the same way he pretends he’s a girl and force people to call him “Governor” because it makes him happy.

It worked for The Emperor Norton.

Bruce is really getting to act like an attention whore.

He’s got delusions for grandeur. He ‘did it’ once in the Olympics. But being a chief executive officer of a state?

Granted, almost anyone would be better than the corrupt imbecile Gavin Newsom currently in office. But with the likes of Richard Grenell around?

It worked for Ronald Reagan but Reagan was a true Conservative. It didn’t work for Ah-nold but Ah-nold was not then, nor has he ever been, a Conservative.
I just figured he was thinking about another Olympics and knew he couldn’t compete with the men but thought he had a chance against the women. Wonder how he feels about Title IX?

Reagan was involved in politicals (professionally) long before he ran for Governor. He was alway in the lead position in his earlier endeavors. And he was an alpha male.

Ahnold was a self-made multi-millionaire, in several ventures. As a governor, he was kinda like a George W. Bush milquetoast. But he did lean right of center on most things, until he reached his level of incompetence, then began listening to his idiot liberal wife. Then it all came crashing down. But he was an alpha male – until he stupidly handed his gonads to his liberal Kennedy wife. He did, after all, have morning sex with the maid while his idiot wife was upstairs.

Bruce Jenner was a great athlete, and a true winner. But he has a screw loose upstairs, and he is certainly no alpha male – as we have seen with his surrender to the goofballs of the Kardashian clan.

Give it a rest, Bruce.

He was born a male. If he can just declare himself to be a female and everyone in the Democrat Party accepts it 100%, can I, who was born Caucasian, just declare myself to be black and collect reparations with the other black people?

Let’s all say a prayer to San Andreas.

Question: Jenner runs and wins. Diane Feinstein (87 or 88?) retires before 2022. Jenner appoints a Republican to the Senate. Senate power tips back to GOP. The odds of it are low, but is a scenario like this possible?