Californians may chose “Keeping Up with the Kardashians” over the current episode of “Twilight Zone” now playing in the state. 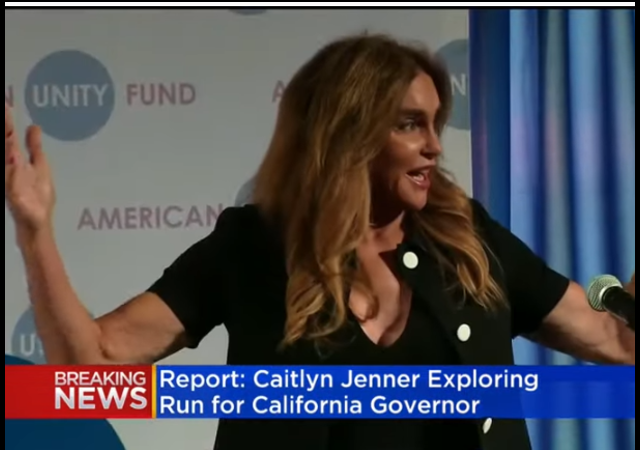 The last time we reported, the signatures were being verified, and candidates were beginning to come forward. One of those gubernatorial hopefuls may be former Olympian and reality TV star Caitlyn Jenner, who is now rumored to be considering a run to replace Newsom.

Though signatures on a legally required petition are still being verified, Newsom, a Democrat in his first term, is all but certain to face a recall election later this year, with critics objecting to the onerous COVID-19 restrictions he has placed on the state over the last year — and his unwillingness to follow his own rules.

Caitlyn Jenner is ‘actively exploring’ a run for governor of California https://t.co/V22ysGZ8GM

Jenner is a high-profile Republican and previously supported 45th President Donald Trump. It will be interesting to see how the state’s progressives and national media strain themselves to cover Jenner, balancing precariously between promoting trans tolerance vs. Trump Derangement Syndrome.

If coverage like this Axios piece is a clue, Trump-hate is going to dominate.

Jenner’s potential run also coincides with momentum from the Gavin Newsom recall efforts as opponents continue to criticize his handling of the pandemic. At the same time, Newsom scrambles to reopen the state to prove his questionable leadership skills.

As a reminder, we reported that Jenner toyed with a run for the US Senate in 2017.

The 2003 recall election featured the winner Arnold Schwarzenegger and 135 other candidates, including actor Gary Coleman, Hustler magazine publisher Larry Flynt, and celebrity businesswoman Arianna Huffington. So, based on my experience, the election fun is just about getting started.

Frankly, Jenner has as much of a chance to prevail as nearly anyone. I think most Californians would rather enjoy living in an episode of “Keeping Up with the Kardashians,” as opposed to the “Twilight Zone” episode we are now experiencing.

Will OJ be the next one to throw his hat in the ring?

No. His golf clubs.

This would be expected from a state that is a stranger to reality.

Schwarzenegger vs 100+ other candidates is ridiculous? Even if two get the most votes at some point you’re not really getting a governor that whole swaths of the population were even remotely voting for with that much pool dilution.

Anything for the spotlight?

jesus christ. what a clown show,

“she said” “she continued”
Who is this “She” that you speak of?

Oh Dear Lord, the last thing California needs to do is recall and remove Newsom from office only to replace him with that train wreck that calls itself “Caitlyn Jenner”.

Would it be too much to ask for a normal person to run for the governorship of California. Just this once. Please?

Without normal voters, it’s just an exercise in futility.

Does it really matter? I know of no evidence one way or another if Caitlyn Jenner could win over Democrat votes to win a statewide race in CA. Actually I don’t know of any evidence anyone with the (In CA) dreaded R by their name could do that.

1/3 of CA voters who voted Trump is more than enough to trigger a recall election is there any actual evidence Newsom is in serious trouble?

Newsom is in serious trouble. He’s done more than piss off the CA GOP voters. He’s got plenty of Democrat voters hacked at him as well.

That said I don’t think Jenner could pull it off. California Democrats just outnumber Republicans that I can’t see a win for Jenner. I won’t see it can’t happen just that it’s very unlikely.

If on the off chance Jenner wins Jenner still has to deal with a House and Senate that are essentially one party: Democrats. This is what happened to Arnie and instead of being a hard-headed bastard and fighting he caved in on everything.

ThePrimordialOrderedPair in reply to TheOldZombie. | April 9, 2021 at 1:09 am

This is what happened to Arnie and instead of being a hard-headed bastard and fighting he caved in on everything.

Ahnold tried to fight, initially … but after he made that “girlymen” comment (rightfully so) and had everyone jump all over him he sort of collapsed.

“ That said I don’t think Jenner could pull it off.” The surgeon did.

It would be a bad turn for the very lush and highly privileged Newsom.
Newsom “legalized” gay marriage in SF as a political maneuver to lock up the very significant LGBQ…. voter block. The Statewide LGBQ….. block carried him into Sacramento, and he was planning again with the National LGBQ…. block on to the White House.
Kamala as VP puts a block on Newsom in ‘24.
Jenner could pry enough of the state LGBQ…. block away from Newsom to get Has-Been Gavin the recall boot and ruin his dreams of being our National Overlord….

Every time I see Bruce Jenner all I can think of is John Lithgow’s character in The World According To Garp.

Jenner is a sick, sick guy who really needs to just go away and be crazy all on his own.