America is first in infrastructure (not 13th) and the package will not create 19 million jobs. Biden admin has to lie to sell this monster bill. 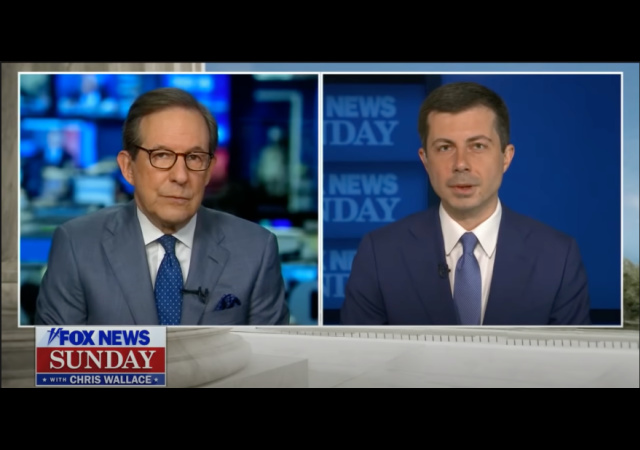 Buttigieg claimed America ranks 13th in infrastructure and the package would create 19 million jobs. Both are lies.

Chris Wallace played a clip from Buttigieg’s Meet The Press appearance from last Sunday when he said the package “would create 19 million jobs.”

Wallace got right to business:

WALLACE: But it turns out the study you’re citing from Moody’s Analytics says the economy will add 16.3 million jobs without the infrastructure
bill, and 2.7 million more with it. So it doesn’t, as you said last Sunday,
create 19 million jobs.

BUTTIGIEG: Well, you’re right, I should have been more precise. The 19
million jobs that will be created are more than the jobs that will be
created if we don’t do the plan. And it’s very important to make this
point, as you’ve just showed us.

In fact, at least according to that Moody’s analysis, 2.7 million
additional jobs if we pass this package, just further proof that it’s good
for the economy, and taken as a whole, it’s going to add jobs compared to
doing nothing.

WALLACE: But would you agree that you and the president and Brian Deese,
the economic adviser on this program last week, you all exaggerated the
jobs impact?

BUTTIGIEG: Look, there are a lot of different analyses about just how many
million jobs this is going to create. I saw a Georgetown study, I think it
said an investment of this type will create or save 10 to 15 million —

WALLACE: But, Secretary, you’re the one who recited Moody’s —

BUTTIGIEG: The point is it’s going to create millions of jobs.

Buttigieg tried over and over to make it appear that a difference of 16 million is not a big deal. All that matters is that the package will create millions of jobs:

BUTTIGIEG: It’s part of a scenario that Moody’s says will create 19
million jobs.

But the bottom line is, it’s going to add jobs. And this is a direct
refutation of people who are saying otherwise. So, yes, you’re right, I
should be very precise. The difference in jobs that that particular
analysis suggests is 2.7 million more. That is a great place to be, why
wouldn’t we want America to create 2.7 million more jobs?

And I want to say something else about the jobs that’s very important. The
majority of them, according to a lot of the studies we’ve seen, will be for
people who don’t necessarily have college degrees. So there’s a time when
you’ve got a blue collar communities that are hurting, a lot of questions
about the future of union jobs, construction jobs, manufacturing jobs. These are exactly the kind of jobs we need to be creating.

Um, okay. Say that to the 16 million people who won’t end up getting jobs from this $2.5 trillion package. Remember, over half of the bill does not involve infrastructure.

America is #1 in Infrastructure

Buttigieg and others in President Joe Biden’s administration insisted America ranks 13th in infrastructure. I mean, you have to make America sound like it’s horrible in order to justify spending over $2.5 trillion.

WALLACE: I want to start with a fact check of how the Biden administration
is selling this plan.

You all like to say that U.S. infrastructure is ranked 13th in the world,
but our colleague Chuck Lane of “The Washington Post” did some interesting
research. Three of the nations ahead of us on that list are Singapore, Hong
Kong, and the United Arab Emirates, which are tiny states and hardly
comparable. Of the 10 largest countries geographically, including China and
Russia, the U.S. actually ranks first.

So, Secretary, not to say that everything is fine, but why not be straight
about the actual conditions here in the U.S. to the American people?

BUTTIGIEG: Well, the American people already know that our infrastructure
needs a lot of work. That’s one of the reasons why there’s such strong
support for the president’s American Jobs Plan.

Look, the American Society of Civil Engineers rates our infrastructure,
we’ve been getting a lot of Cs and Ds. But you know don’t need an
engineering report to know that driving on American roads, they’re not the
way they should be. Our bridges need work. We’ve got thousands upon
thousands that are either in poor condition or even structurally deficient.

If you go to U.S. airports and you compare them to airports in other
countries, other developed countries, you know that the U.S. is not at a
high standard. We don’t have a lot of work to do to persuade the American
people that U.S. infrastructure needs major improvement. The American
people already know it.

And that’s one of the reasons why there’s such extraordinary Republican and
independent and Democratic support for this package among the American
people.

WALLACE: Not necessarily in Congress, however.

He wouldn’t be a Democrat if he didn’t lie.

It’s in the D blood.

This is why Pete couldn’t get the nomination. His elite masters realized that he isn’t experienced enough too lie properly and well. He’s trying hard though. He is just another result of our participation certificate education system. Pete is superficially smart, but fundamentally silly, self-aggrandizing and foolish. Think of it this way. People like Pete can cleverly and successfully kick the can down the road, but ultimately they ruin lives and kill people for no legitimate reason. Yet the “progressives” think such people are smart and “elite.” Silly, but deadly.

I know the media has gone back to carrying water for the administration, but it seems that a few have liked the confrontational method they used with Trump – they actually got to BE journalists, and they like that “speak truth to power” trip they went on. And while they are not going to confront Biden’s admin like they did Trump, I have seen some pushback.

Actually got to be journalists, with the Trump Administration?

They were lying corporate globalist gold star liars, and still are!!!

sorry -wrong wording? they got to actually ask hard questions and press for answers. Yes, they were confrontational and WRONG most of the time, but they got a taste for confronting power instead of bending over and asking for more.

So I’m not the only one who is astonished to see Chris Wallace beat on someone other than Trump.

We have to get over this idea that the government is wasteful. It is, but not with spending bills like this. This isn’t waste. This is bribe money. This is money laundering.

Waste sounds like it is just negligence. These bills aren’t negligence, they are purposefully stealing taxpayer money to enrich themselves and their friends.

And how many jobs will the ‘infrastructure’ bill kill by jacking around wages and slapping giant stacks of regulations on businesses? I suspect far more than it will add.

Glad to see our “leaders” showing so much intelligence and integrity on top of some killer arithmetic skills. Before the interview, did Petey take an SUV to a bl0ck away and ride his bike the rest of the way? The only people these clowns are fooling are democrats.

So the $2 TRILLION package will create 2 million more jobs than if it didn’t pass.

Why do I have this unshakable notion that none of those jobs — not. a. one. — will actually pay the worker even 1/10th that? Or that the majority will be low-wage make-work menial jobs?

We’ll be spending almost seven figures per job, and pretty much all will be high five figure salaries at best, with low five figures rounding out the majority.

And the Left wonders why nobody who can actually do math trusts a word they say….

As an aside, I think all these massive pork-filled bills are being offered with an ulterior motive: To desensitize Americans to REALLY BIG numbers.

Most Americans never have seen and never will see a million dollars, but can conceptualize what it should look like. It’s a big number, but not that big.

However, a billion dollars is too large to effectively conceptualize. Sure, you could do the, “imagine one million dollars, and now do it one thousand times”, but even that is difficult for some people. For most, one billion is a number you can write on paper, but you’ll never see a billion anything, so hearing about a government project costing a few hundred billion dollars used to sound extraordinarily expensive.

It’s like that, but three orders of magnitude larger.

However, the bills introduced under the Biden Administration aren’t measured in millions of dollars, or billions of dollars. They’re all multi-trillion-dollar proposals. It’s a number too large for most humans’ imaginations, and there are a LOT of such bills.

The first time we heard about multi-trillion-dollar proposals, everyone heard that price tag and balked. It was too much. What on Earth could cost that much?

Now that those REALLY BIG numbers have been thrown around several times recently, people are moving on. Congress now has tacit permission to propose massive, pork-filled, multi-trillion-dollar omnibus bills whenever they feel like it.

The shock has worn off, and the outrage is gone.