The Border Patrol has no choice due to overcrowded facilities. 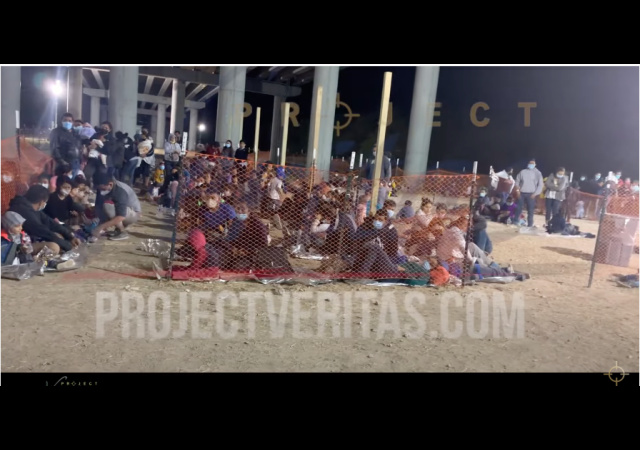 A border patrol agent showed Project Veritas a video of migrant children held in a makeshift processing channel under the Anzalduas International Bridge.

A Brave Insider felt compelled to record and send never-before-seen footage to Project Veritas, in an effort to illustrate the inhumane conditions illegal immigrants — many of them minors – face while in custody.

The area under the bridge was converted into a makeshift processing center for Customs and Border Patrol (CBP), due to the overflow of normal detention facilities near the Southern Border.

In the clip, dozens of migrants are seen sleeping on dirt with nothing but a space blanket and the clothes on their backs.

These people are _not_ insurgents, so there’s _no_ problem.

And they aren’t really “cages”, so…

I’m sure an outraged AOC will get right on that.

Has anyone informed Jumpin’ Joe Biden about the overwhelming and inhumane conditions on the border? Because his chief of staff has him more worried about finding a new venue for the MLB All-Star game.

Maybe they could have it at the San Diego Convention Center.
They what? Oh, then, never mind.

Progressive Democrats don’t seem to care about masks when it comes to illegal migrants crossing the southern border.

But, they won’t let you go to work, to church, to a restaurant, or your child go back to school without wearing one.