“The graffiti, which included racist epithets and multiple references to the Klu Klux Klan, was discovered in a stairwell inside Mitchell Towers on Friday” 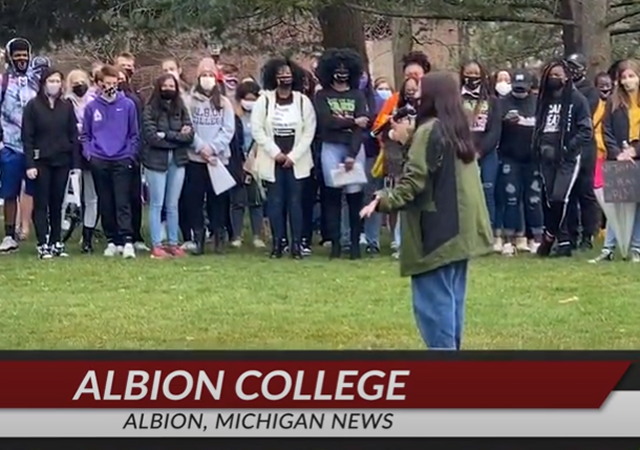 Albion College in Michigan was in an uproar this week over racist graffiti messages left in a school dorm. It turns out, however, that a black student left the messages.

That did not prevent students from protesting, naturally.

A Black student was responsible for racist graffiti at an Albion College dorm, according to campus police.

MLive.com reported on Thursday that Albion Chief of Public Safety Scott Kipp said the suspect, a 21-year-old Black male, was brought in for questioning on April 6 and admitted to creating most of the graffiti.

According to Kipp, video evidence corroborated the student’s confession. In a statement Wednesday, the Michigan-based college said the student acted alone.

Breaking: Last week, shocking racist messages appeared on the campus of @albioncollege in Mich., prompting a large response from the administration. The FBI was even put on standby. Today, Albion police announced that a black student admitted to the crimes.https://t.co/F0xo92WRXl pic.twitter.com/yuVQzOiB3T

Steve Marowski of MLive has more:

Albion police brought the 21-year-old Black male in for questioning on April 6, according to Chief Scott Kipp. The student admitted to creating most of the graffiti, and video evidence from Albion’s Campus Safety Department confirms the statements made by the student, Kipp said.

The student was released after questioning, Kipp said. Once the investigation is complete, the information will be submitted to the Calhoun County Prosecutor’s Office for any charges related to the incident, he said.

The graffiti, which included racist epithets and multiple references to the Klu Klux Klan, was discovered in a stairwell inside Mitchell Towers on Friday, April 2, university officials said.

Students have issued demands based on this hoax. This is a familiar pattern. We’ve seen this same series of events unfold at various schools in recent years.

Despite the white supremacist graffiti turning out to be a #HateHoax by a black student, people at @albioncollege are boycotting classes again for a third day. They have a list of race-related demands. pic.twitter.com/hxX7U3KYny

This video culminates in a speaker telling students that she doesn’t feel safe and knows they don’t feel safe.

The school tweeted this a few days ago.

We stand together with our Black students, alumni, faculty, staff and broader community members in condemning the recent acts of racism on campus. Hatred and injustice have no place at Albion, and will not be tolerated. (1/4) pic.twitter.com/vhUqlkUgPn

Did I mention this was a hoax?

Ten bucks says the college administration knew early that it was a hoax – yet decided to keep lying so they could exploit it.

Black student faking racist graffiti? This happens so often that as soon as you read the first (fake) news story, you know how it will all end..

But the MSM will continue to report the initial story non-stop – even though everyone knows it will turn out to be fake.

“A Black student was responsible for racist graffiti at an Albion College dorm, according to campus police.”

Not only will you not ever know his name, there is a high probability that he will get little or no punishment. He just needs some counseling.

Supply and demand. When demand is high, supply will catch up.

Why should he not be prosecuted the same as if he where another race?
Was he not in violation of the law?

One of the things that “protected classes” are protected from [assuming they are “politically correct” and actively “woke”] is the law. You cannot prosecute them because . . . reasons.

Have you met our attorney general? Talk about political whore misusing her position to push her lesbian/liberal/fascist/marxist/communist agenda, then you’d know her.

As long as race-baiters continue to be rewarded – this will not end.
Think about how many have done this and were never caught.

Jackson and Sharpton turned race-baiting into a business model. BLM is just the 2.0 version.

Did Jews have to manufacture anti-semitic hostilities in 1930s Germany? Did blacks have to fabricate racial threats in 1930 or 1950? Supply just isn’t measuring up to “progressive” demand. This has to be a huge disappointment to those who live to virtue-signal. And what could be more wasteful and disappointing than an unnecessary and unused “safe space.” So, gin up a crisis and pretend to be alarmed. Sure beats studying.

It is hard to imagine that somebody has that much self hatred.

The answer is simpler. They are troublemakers.

It’s not self-hatred, it is the student demanding attention, saying, “Look at me! I’m a victim!”

The law is a weapon used when prosecuting a violation of the narrative.

So he wanted to get out of a test he didn’t study for?

Pretty sure most of the tests would be more of a How do you feel about this obvious white supremacy type of question rather than a true/false or math type question.
Which means of course studying isn’t necessary.

Forgive the radical question, but why is the FBI concered with this BS?

CRT will be the death of us all.

If the graffiti writer had been white, by now, he would have been named, expelled, criminally charged, and the gallows would be under construction. All the white students, faculty and staff would be forced to self-flagellate and confess their “sin” of being white, and condemning all whites everywhere for the heinous crime of…defacing private property.

Instead, the perpetrator of this hoax is black so his identity is being hidden and protected. Yet all the white students, faculty and staff will still be forced to self-flagellate and confess their “sin” of being white, and condemning all whites everywhere for the heinous crime of…someone else defacing private property.

Hands up anyone who was surprised.

Entry #413 and counting, at fakehatecrimes.org .

How usual. Logically, if a black has to commit a hoax hate crime to draw attention to racism, it kind of means there isn’t any actual hate crimes being committed.

How dare the college ignore the massive racism problem that doesn’t exist! I demand my victimhood now!

Expel the bigoted fraud. Post his/her photos to warn other schools against admission.

I see their problem….

Albion:
It has two possible etymologies: either from the Proto-Indo-European word *albʰo- ‘white’ (cf. Ancient Greek ἀλφός, Latin albus ), or from *alb- ‘hill’. The derivation from a word for ‘white’ is thought to be perhaps in reference to the white southern shores of the island – visible from mainland Europe and a landmark at the narrowest crossing point –, though Celtic linguist Xavier Delamarre argued that it originally meant ‘the world above, the visible world’, in opposition to ‘the world below’, i.e. the underworld.[7][8][9]

Obviously white supremacy again. Because they think he’s too dumb to make his own decisions. Now THAT’S racist.

This is impossible… black people can’t be racial…. They’re not powerful enough…

But white supremacy made him do it.

(Wish these would just show up inline. Other blogs do it.)

When being a victim becomes currency, expect plenty of counterfeits. What a shame. This guy should be convicted of a hate crime, same as anyone else would have if they were of a different race. The purpose was the same, to instill fear. Why should the criminals race matter here?

With all those people raising fists, I wouldn’t feel safe either.