Biden says this a week after pressuring MLB to move its All-Star Game out of Atlanta, GA. 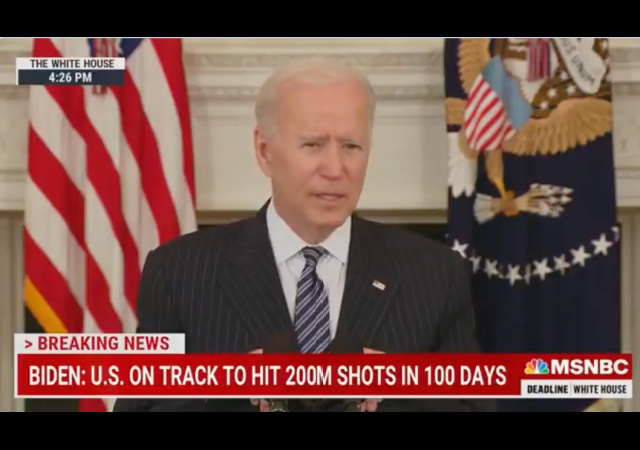 We saw Press Secretary Jen Psaki try to deny President Joe Biden had anything to do with MLB moving its All-Star Game out of Atlanta, GA, over the state’s”Jim Crow laws.”

I guess the blowback was huge because Biden softened his stance when it comes to athletes. He refused to take a side when asked if the Masters golf tournament should leave Augusta, GA, due to those “Jim Crow laws.”

He cannot stop describing them as Jim Crow laws.

Biden on whether the Masters should be moved out of Georgia: “That’s up to the Masters”

“It's reassuring to see that for-profit operations and businesses are speaking up about how these new Jim Crow laws are just antithetical to who we are." pic.twitter.com/zMnDRqp3Cf

What did he say about MLB holding its All-Star Game in Atlanta? Oh, yeah:

“I think today’s professional athletes are acting incredibly responsibly,” Biden told ESPN’s Sage Steele in an interview. “I would strongly support them doing that. People look to them. They’re leaders.”

Speaking of a crow

You know he threatened to withhold funds.

And please tell me why taxpayers should fund professional sports one more time?

How about Federal executive branch facilities located in GA, will those be relocated?

All of these are under control of the federal government of which you are the principle executive. They are, nominally at least, under your executive authority. Will you ask Congress to assist in creating a new Base Relocation and Closure Joint Committee?

When will they begin deliberations? Do you have a timeline for removing Federal government personnel from the oppression of GA ‘Jim Crow’?

Follow up: will the new locations for these be placed in a State with less restrictions on voting rights than GA? It has been pointed out that the State of NY voting laws are far more restrictive than those in GA. Will you be using GA as the marker? That is to say if a State has laws more restrictive than GA that all Federal facilities are subject to removal?

What impact will these policies have on our National security posture? Are we.signaling weakness to China, Iran, Russia and other potential adversaries as a result?

Biden wants to rebuild roads to be 3 feet higher. Now he wants to upearth Augusta National and put it where? Each hole is named for a blossom one of which is named “Chinese Fir”. Evergreen is now debating conifers and lynching…. so does that taint “Chinese” being linked to “fir”? Biden could insist the holes be named for the heroes of the Left…. Martin, Floyd, Gray, Brown. or landmarks like Stonewall.- (NOT that Stonewall).

Don’t even think about naming a hole after a feminist. Augusta is named after a very white Roman guy. That right there should eliminate them.

“Biden wants to rebuild roads to be 3 feet higher.”

Why? So everywhere you go, you’ll be traveling downhill? Because heavy snowfall will just drift off? Because you’ll only have to resurface them once every Republican administration?

So we will have dry roads when Obama can no longer keep the seas from rising. (Recent Biden speech on infrastructure bill.)

If you call a dog’s tail a leg, how many legs does a dog have?

4. Calling a dog’s tail a leg doesn’t actually make it one.

There are few people in US politics who are as racist as this evil old guy named Biden.

Masta. “Masters” is White Supremacy talk. If the Golf Channel broadcast more in Ebonics and changed the entry qualifications there would more diversity.

I think we need a little Affirmative Action here. Qualifying men can play from the ladies’ tees.

This nation is run by idiots.

It’s impossible to upvote that too many times.

I’ll take Condaleeza Rice’s advice over our bumbling president. She actually grew up in the Jim Crow South and is an Augusta member.

And she knows what day of the week it is.

During the Master players press conference today a reporter tried to trip up Bryson (who is a friend of the Trump family) about the Georgia election law and diversity. He provided a great response and there were no further questions. The reporters were ready to pounce but no go.

Here’s what I don’t get. When someone is trying to master a skill, that’s generally a good thing. Someone who has practiced enough at something and shows a high level of skill, perhaps higher than others, can rightly be considered to have mastered that skill. A group of such people can rightly be called masters. Were slaves involved in them learning their skill? Probably not.

So when a group of people who have mastered a certain skill gather to compete against one another, is it not a gathering of masters? Not slave masters, but skill masters. So how is the “Masters” an inappropriate name for a golf tournament (a contest of those with a high level of a particular skill)?

Answer: There’s no way in hell it’s inappropriate, especially not for anyone who speaks English as their first, second or even third language.

How can people be so f-ing dumb and still show their faces in public?

First off, the issue has nothing to do with changing their name.

Second, under the historical Guild system in Western civilization, one started as an apprentice (not all too different from an indentured servant or slave) until one learned enough from “his master” to produce a “masterpiece” that served as his ticket to his own mastership status. So yes, sort of slavery, but one designed for you to be promoted out of (assuming you were competent, which I suspect is really the issue at the root of this annoying “equity” argument).

Under that system, Arbeit really did macht frei.

I guess my point is, what person with half a brain is going to fall for a bullshit equivocation between being Master of a skill and being Master of slaves? Anyone who does is utterly brain-dead. Yet people are falling all over themselves to make a non-point over and over.

As brain-dead as the people who object to the use of the word “niggardly,” or object to a professor of Asian languages discussing the common vocalized pause “niga-niga-niga,” or object strongly to anyone who says, “All lives matter?”

Yes, we have plenty of those in stock. Check the blue-lit aisles on any floor.

And I never said there was a name change involved. My point was the stupidity of equivocating two very different meanings of the same word.

Milhouse? Is that you?

If you’re going to be pedantic, don’t half-ass it. That’s one, narrow reading of the term “master” that doesn’t apply in the context of the comment you replied to.

In reference to your last question; because they are Leftist TWANLOC.

The Masters cannot leave Georgia and still be the Masters. The tournament, course, and golf club were created by the legendary Bobby Jones. The tournament is is inextricably historically tied to the course and the Augusta National Golf Club.

Here’s what should happen… Every CEO who is a member and has an issue with Georgia’s election integrity law should publicly quit the club. The odds of the happening are near zero.

It was sickening watching press interviews today when the same female Democrat political activist posing as a journalist asked every player interviewed if they thought the tournament and PGA were doing enough to ‘fight’ the new law. I hope she enjoyed her time at Augusta because I doubt she will ever be permitted on the grounds again after this week.

Gary McCord was banned for life for simply jokingly suggesting, tongue-in-cheek, that the greens had been bikini waxed.

Those corporate CEO’s don’t want to lose their membership at Augusta National or have their friends banned from playing there.

The leadership of Augusta National has a record of not caving to silly demands, so this would be up to the PGA, which has recently entered the political fray by pulling its major championship tournament and all future tournaments from all Trump-owned properties.

Given the fact that The Masters is the only major championship tournament that is held at the same venue every year, and that the venue is the draw, I give this about a 0.0% chance of going anywhere.

Insane, PGA pulling all its tournaments, well that’s enough for me
I will never watch another PGA tournament again

If you did a survey of people and asked them if Trump got richer or poorer during his presidency, I bet 90% would say richer. IMO he is pretty unique in seeing his net worth drop by a lot.