Likened to the discovery of the Roman city of Pompeii, in terms of its potential importance to archeologists and historians. 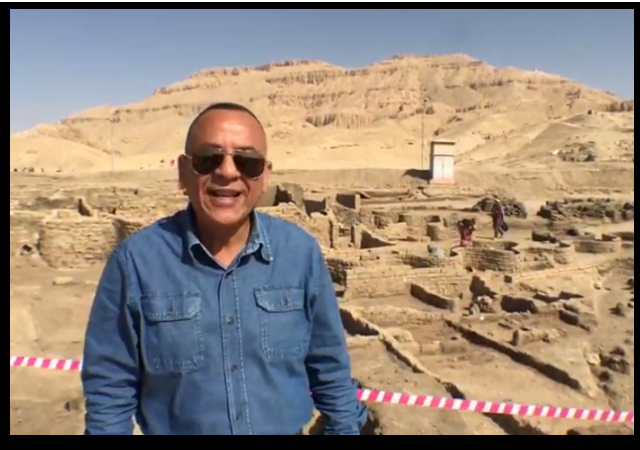 Egypt is back in the news, and this time it is not related to a ship blocking its famous canal, but to a discovery of an ancient city that may reveal much about the ancient peoples.

Archaeologists have uncovered the remains of an ancient city in the desert outside Luxor that they say is the “largest” ever found in Egypt and dates back to a golden age of the pharaohs 3,000 years ago.

Famed Egyptologist Zahi Hawass announced the discovery of the “lost golden city”, saying the site was uncovered near Luxor, home of the legendary Valley of the Kings.

“The Egyptian mission under Dr. Zahi Hawass found the city that was lost under the sands,” the excavation team said in a statement Thursday. “The city is 3,000 years old, dates to the reign of Amenhotep III, and continued to be used by Tutankhamun and Ay.”

The find has been likened to the discovery of the intact Roman city of Pompeii, and Egyptologists hope the new discovery provides the same window on the ancient culture as the Roman city has provided historians and archeologists since it was uncovered from the ash layers of Vesuvius.

“The excavation started in September 2020 and within weeks, to the team’s great surprise, formations of mud bricks began to appear in all directions,” Egypt’s antiquities ministry said in a statement.

“What they unearthed was the site of a large city in a good condition of preservation, with almost complete walls, and with rooms filled with tools of daily life.”

The southern part of the city includes a bakery, ovens and storage pottery while the northern part, most of which remain under the sands, comprises administrative and residential districts, the ministry added.

“It was the largest administrative and industrial settlement in the era of the Egyptian empire on the western bank of Luxor,” Hawass said.

"It’s very much a snapshot in time—an Egyptian version of Pompeii," says one archaeologist about the 3,400-year-old royal city https://t.co/G69zoh70fD

To put the timeline in perspective, Pharaoh Amenhotep III ruled ancient Egypt about mid-way through the famous 18th dynasty, after a number of successful rulers expanded the empire and trade. His son, Akhenaten, was the spouse of the iconic beauty Nefertiti and is referred to as the “Heretic” for abandoning traditional worship for the solar deity Aten. Tutankhamen, thought now to be Akhenaten’s son.

For those of you who may be familiar with the area, the excavations lie on the West Bank of Luxor near the Colossi of Memnon, Medinet Habu and the Ramesseum (the mortuary temple of King Ramses II). And while gold and precious jewels have not been located, there is a wealth of knowledge that might be obtained about how the Egyptians created the magnificent art that is admired today.

The site contains a large number of ovens and kilns for making glass and faience, along with the debris of thousands of statues, said Betsy Bryan, a specialist of Amenhotep III’s reign.

“Just to locate the manufacturing centres opens up the detail of how the Egyptians under a great and wealthy ruler such as Amenhotep III did what they did. This will furnish knowledge for many years to come,” she added.

On a personal note: I may be able to see this discovery up close and personal. My husband is planning a multi-week trip to Egypt next year, in honor of a milestone birthday for both of us.

Are you kidding me??? Put me on a plane to Egypt! It’s worth the risk, and I have always dreamed of taking everything over there in (had a dream to be an archaeologist as a kid but stopped pursuing…not sure why!).

Everyone knows it was enslaved Negroes under the whips of Thomas Jefferson ‘s forefathers.

What “everyone knows”, but turns out not to actually be true, is that the Jews built the pyramids. But the most recent evidence is that they were built by free workers, not slaves, and that it was an honor to be chosen to work on them.

“it provides any details regarding the construction of the pyramids!”
*****
FWIW, the Great Pyramid was ~1200 years old when Amenhotep III ruled Egypt. I have been to Egypt twice and the antiquities are amazing.

Visited Egypt about 25 years ago. Great place, for a guy. Women get intimidated due to being put in a secondary role as soon as they are off the plane. The pyramids were not built by slaves or aliens. They were built by the people. Back in the old days the Nile would over flow and inundate everything for 6 months. The people would be sitting up on the hills with nothing to do. So, to prevent issues they were put to work. The stones are big, but not that big. I have moved similar around my yard. The village they are talking about here is common in the country, the whole place is a potential dig. A must see is the museum in Cairo. You have to hire an Egyptologist to know what you are doing. If you can, arrange a car trip and see a country that is still living as 2000 years ago, and not happy about it, hence frequent stops at machine gun nest to secure the road ahead.

As a woman, you must have a scarf, and don’t were tight shorts, pants or a long dress are ok. You want have as much trouble in Cairo, but stay close to the group in the out back. Prepare to see things you can not imagine.

I have been interested in archeology for over 40 years, this is a fantastic discovery which will take many decades to fully evaluate.

I notice when posting that there is often a wait on Google. Why, considering Google’s nature, it would be best to not feed the beast.

I’m amazed that this site hadn’t been discovered, previously. One assumes that all the major archaeological finds have been made, already, what with modern technology assisting in the search.

Agreed! Just when it seems we know everything about everything, we find out that we don’t know all that much. Egypt has been explored since Napoleon, and we are still finding out about it. I love that!

What I’ve always wondered about cities lost to the shifting sands- unlike the ones lost to volcanos- is how? Statues, household goods, pots, pans, jars, all left behind for archeologists to uncover centuries later.

If they could build the pyramids, why couldn’t they keep the cities functioning? Sandstorm! Afterwards, get out the shovels, brooms, and wheelbarrows- and clean it up. A city is a lot of capital and infrastructure. Why was it abandoned?

Perhaps the current god figure king would use it as an excuse to have a completely new one built newer and better, maybe it was even buried as a feature to prevent it being exploited by rivals. Or maybe plagues or superstitions led to intentional burials…so many possibilities that we can try to decipher through artifacts!

Often cities were abandoned slowly, over the years, as the sources of livelihood dried up. Or the water supply dried up. Or an epidemic may have emptied a city, by killing some and forcing others to flee. Then the sands came and covered it all up.

Unlike Pompeii, you wouldn’t find things in media res. People had time to pack up and leave, and what you find is what they couldn’t carry, or they decided wasn’t worth taking.

Petri, Old Sarum, Detroit, people have left non-viable cities throughout all of history. People don’t immediatly forget the city was there, but there’s no reason to go back, and nature reclaims it. Then people forget.

I read somewhere the theory that after this pharoah and a couple of his successors’ reigns, there had been a severe backlash against their having abandoned the old polytheistic religion in favor of worshipping Aten, a monotheistic belief. In the reaction against this heresy, this city and their burial sites etc were abandoned, and there was a return to the traditional religion. Dunno but makes sense as a reason the city was left to the sands.