So Twitter is cool with your violence, hatred, and conspiracy theories if it belongs to an ideology and not an organization. 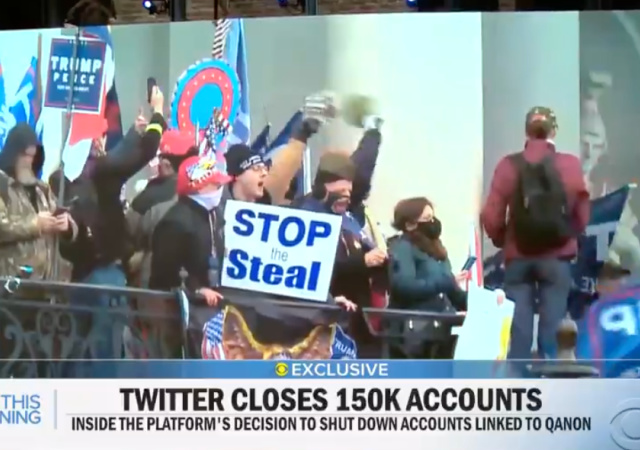 In interviews with CBS News, senior Twitter officials described a yearslong effort to fight domestic conspiracy theories. They said they adapted similar strategies previously used to combat international terrorism and child sexual exploitation. They recounted how for months before January 6 they limited the visibility of QAnon-associated accounts — hoping to encourage users to modify their behavior — and ultimately took more decisive action after the riot that left five dead and dozens injured.

“That was a moment of reckoning where we realized that the approach that we had put in place the previous fall, of attempting to reduce the influence of this movement, wasn’t sufficient,” one Twitter official said.

Twitter removed tweets after the “Pizzagate” ended with a man shooting up “a pizza restaurant he wrongly believed was associated with child sex trafficking.”

A person at Twitter said removing tweets backfired: “What we saw was when we removed tweets, people were like, ‘Oh, Twitter is removing these. So we must really be onto something. We’ve hit a button, we’ve hit a nerve. We are right about this and Twitter’s in on it too.’ And it really just kind of snowballed.”

Twitter’s began a major effort in July 2020, four months before the election. Twitter announced that QAnon and accounts that promoted it were in violation of the site’s coordinated harmful activity policies.

Twitter used “a combination of human review and then very high confidence machine learning to help us identify not just who is sort of QAnon adjacent, but really what the core community of accounts is,” according to a senior Twitter official. The company had for years used similar processes “to address everything from child sexual exploitation, to networks of terrorists, to spam.”

Twitter will not touch ANTIFA accounts because it agrees with FBI Director Christopher Wray that it is “an ideology not an organization.”

So Twitter is cool with your violence, hatred, and conspiracy theories if it belongs to an ideology and not an organization.

Twitter will allow you to use the platform if you are rehabilitated. The language, you guys:

Speaking with CBS News, senior Twitter officials described the effort as part of their focus on “deradicalization” and “rehabilitation” of the people spreading QAnon.

“We really want to create opportunities to come back from the fringes of this conspiracy and be sort of turned into healthy participants in the conversation on Twitter,” a Twitter official said.

Um, it’s never a good look to use “rehabilitation” with anything not connected to an addition. Might as well say re-education.

The rehabilitation process couldn’t be simpler.
You answer a captcha that asks for “2+2.”
Give the “right” answer, and you’re back in.

I am probably non-rehabilitation-able. I was booted off Twitter last September, but not for anything to do with the Q-Anon stuff. I never really understood what that was supposed to be.

I committed a much graver crime than conspiracy stuff or sanctioning violence.

I called @hillaryclinton a “vile old whore”. That earned a permanent suspension.

I had a number of Twitter accounts, opened them long before I needed a replacement. After they banned or even demanded that I remove something, I just walked away. One has been in place since then, they periodically send me notices to use it.

For some reason, I don’t plan on doing so.

None the less truthful.

What is Q-Anon? I know no one associated with that group and most people have never heard of it. I doubt anyone could find 150K Q-Anon accounts……. this is just more propaganda from Big Tech and the media.

QAnon is actually a real thing. They are people who latched on to some supposed DC “insider” who was feeding them crazy (my guess it was an intel psyop). The crazy included everything from Trump will become president again on March blah to there is some Satanic cabal of Hollywood and DC elites that feeds on and/or bathes in baby blood. It’s all totally cray-cray, but yeah, some people bought it. Anyway, they are real and all over Twitter and now on Parler, Gab, etc. We’ve even had them here (albeit briefly since they invariably violate our comment rules).

I had never heard of it until they had a QAnon “expert” talking about it on NPR!

Yeah, it’s a bizarre fringe group that Democrats and their federal law enforcement/military/media arms like to play as mainstream conservative/right. That most people on the right have never heard of them doesn’t matter, of course.

Democrats are more likely than Republicans to have heard of QAnon

Didn’t click the link, but I can believe the headline. Qloons believe the most bizarre crap, but these fringe freaks are not “threats to democracy” or whatever the left wants to claim. They are hyper-gullible people who are apparently incapable of critical thinking (or really, of any thought at all).

Not necessary to click at all. One need only look at the obsession to see who it excites. Could label them, BluAnon!

What would they do without SPLC?

Interesting link it also points out that democrats are much more likely to have an unfavourable opinion of Qanon so characterising democrats as being prone to qanon isn’t really shown by the link.

Well, if you recast the statement as Democrats being “prone to Qanon,” yeah, it doesn’t show a link. This is slippery rhetoric, the sort we expect from a leftist troll. Most people on the right have never even heard of QAnon, among those who have (like myself and our readers here at LI), it is bizarre fringe group of bizarre fringe freaks who are highly susceptible to believing outlandish lies. I am telling you right now that QAnon is considered stupid, nutty, fringe, and is completely rejected by conservatives. I say this as a conservative and as a normal person with a brain. Believe it or not, your choice.

It’s interesting how the Left weaponise Q-Anon as being a major influence on the right and yet it is the Left that are most familiar with it, Only something like 10% of Republicans claim to know a lot about it whereas 30% of college educated Democrats make the same claim. And where only 50-55% of Republicans have heard of Q-Anon, roughly 60-90% of Democrats (non-college/college educated) make the same claim. Shouldn’t that make Q-Anon a Leftist thing? 🙂

Try informing a dupe, loaded with the latest from WAPO, MSNBC and the rest. Yet without hesitation they call out others for ignorance and stupidity.

CDR D I have to agree with you that Hillary is a VOW
But there’s also San Fran Nan Pelosi who is a COW–a crazy old witch.
But then I can’t get myself kicked off Twitter because I never signed up.

OTOH 150K QAnon or QAnon associated accounts? Give me a break.!

I doubt that the Q Anon membership equals or exceeds Anti Fa membershipo.

Not so much interest in BluAnon.

Torn on this. The shouldn’t be banning them but I’m not going to miss them. Qanon was and always will be garbage and as far as I’m concerned was used to hurt the right by distracting with garbage stuff.

“Twitter will not touch ANTIFA accounts because it agrees with FBI Director Christopher Wray that it is “an ideology not an organization.””

This however is garbage. ANTIFA is real like QAnon of course but of the two ANTIFA is far more organized. One only has to look at the mobs that have been rioting over the last year.

TOZ, you wrote: “. Qanon was and always will be garbage and as far as I’m concerned was used to hurt the right by distracting with garbage stuff.”

Yeah, Q was, to my mind, a feebie plant. That a lot of right-leaning and intensely stupid people glommed onto it is embarrassing, but not the end of the right. Most of the Qloons are ridiculous to begin with (who would believe for a minute that Trump will ride into DC and be somehow annointed president? I mean that takes a special kind of stupid. Add in the crazy about Satanic baby blood drinking/bathing, and come on, how stupid slash gullible are these people?). The Qloons are a tiny tiny group, with most on the right having no idea who they are or what crazy they swallow whole.

The problem here is that we are ALL being painted/tarred with the same brush. We are all Qloons according to the feds who are chomping at the bit to inflict a “war on domestic terror” against U. S. citizens who reject CRT, BLM, and etc. It’s very worrying.

The right loon fringe has QAnon and Sovereign Citizens. The left loon fringe has non-operative transsexuals and communist utopians. Both sides believe in equally ridiculous ideas that require the same “special kind of stupid,” but only one has their lunacies actually enshrined as public policy by the federal government. The very least the federal government owes the loons on the other side is not to actively persecute them.

Note also that the “baby blood” fixation of the loony right is practically identical to the antisemitic blood libel perpetuated by world leftists for millennia, and the left in the US still has not abandoned its antisemitic roots. So who among us will cast the first lunar rock?

Satanic baby blood drinking/bathing? Hadn’t heard that, or much else about these nuts (if there even is more than 150, not 150,000) but what sort of idiot believes that crap?

Qanon long ago has become a left wing moby (a political player who pretends to be a conservative in order interject extremism in the conversation and discredit everyone) site as near as I can tell from the few jpg I see posted. It likely is run right out of the FBI or DHS and is supposed to be from some conservative group, but is in fact a psyop agitator.

If Q were a single person, my money would be on that rat-bastard Brennan.

With the Russia hoax gone, the Left has had to build a new boogie man…Q-Anon and fashion it as mainstream Right/Conservative. Obviously the KKK/Neo-Nazi/Charlottesville only worked against Trump. I can understand the Green Zone mentality of the Dems as they know that they are functionally stealing the country right under our noses. The abusive steps taken to arrest anyone even remotely “involved” with 1-6 reminds me of the steps taken in Germany after the attempt at Hitler (yes…I know.. Godwin)

I have always believed the Q thing was a deep state intel operation designed to appeal to the crazies and some not so crazy. The problem is, I can’t begin to think of conspiracy stuff as bad as the real stuff.

It worked however because lots of people that had no idea what the Q thing was, believed in what was going to happen, spread by the Q believers.

They had an extensive review and test to determine which accounts to eliminate: Did the person have conservative tendencies p[us did the person ever use the letter “Q”.

Plus. Gee, new website and still no (at least obvious) edit function.

Has anybody admitted to being an actual member of QAnon? If everything Twitter claims they believe has been debunked why is Twitter so determined to get rid of them?