Three U. South Alabama Profs on Leave After Photo From 2014 Show Them in ‘Offensive’ Costumes

Three U. South Alabama Profs on Leave After Photo From 2014 Show Them in ‘Offensive’ Costumes

“It paints the picture that these professors are more so trying to do damage control than actually be sincere about their feelings. I personally would like to see them face to face.” 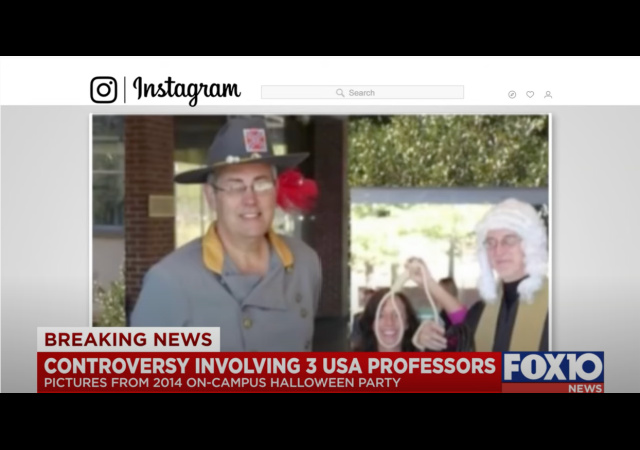 The University of South Alabama placed three professors on leave after a 2014 photo surfaced on them in “offensive” Halloween costumes. The university president stated:

In the past few days, I have heard from many of you regarding the photographs that were taken at an on-campus costume party held in 2014 at the Mitchell College of Business. These photos depict three members of our faculty wearing and holding symbols that are offensive and are contrary to our core principles of diversity and inclusion.

In my message to you earlier this week, I assured all of you that the University would address this situation in a manner that demonstrates our unwavering commitment to diversity, inclusion, and a safe and welcoming environment for every member of our community.

With that in mind, I am writing to let you know that the University has engaged the services of an independent, highly qualified external attorney to investigate this matter and submit the investigative report to University leadership for further action, pursuant to the University’s policies of non-discrimination and equal opportunity/equal access.

The students want the school to do more. From WALA:

The faculty members, Bob Wood, Alex Sharland and Teresa Weldy, will be on indefinite paid administrative leave. University President Tony Waldrop said the school has hired outside law firm to conduct a review that he said should take less than 30 days.

The three professors attended on an-campus Halloween party in 2014. Pictures that appeared on the school’s Facebook page and that recently came to the attention of students, show Wood in a Confederate soldier outfit, while Sharland and Weldy posed with a noose.

Waldrop, who last month announced plans to step down in order to follow his wife to North Carolina, waded into the crowd at one point and engaged the protesters.

“I can never feel what you feel. You’re right,” he said. “But I can assure you that we want to be a better place. And I want your help in doing that.”

The protesters held signs with messages like, “There is no excuse for holding a noose,” and “I don’t pay to employ racists.” One student worse a homemade shirt calling for the professors to be fired.

Kaya Wilkinson, the president of the campus chapter of the NAACP, said many students feel “uncomfortable” with those professors being on campus. She said the administration has not moved swiftly enough and described what see wants to be the default response to similar instances.

“Basically, as soon as a professor says anything offensive or racist, they’re automatically removed from the university,” she said.

Two of the professors issued written apologies, but some students expressed doubt over thein sincerity. Freshman Amya Douglas said a written statement falls flat. She said she wants students to be able to confront them directly.

“It paints the picture that these professors are more so trying to do damage control than actually be sincere about their feelings,” she said. “I personally would like to see them face to face.”

Cameron Grief-Shepperd, president of the Black Student Union on campus, said he welcomes the apologizes but adds that is only the beginning.

“I believe that is a start,” he said. “Whether it was, you know, sincere or not, at least we got an apology.”

The black race owns nooses now? Nobody has ever been hanged in the history of the world except black people? By judges in powdered wigs, no less?

Saddam made a well dressed cadaver. There are so many in congress who deserve at least as well as Saddam got but given the volume to “serviced” it might be more efficient to go with a chipper/shredder, aimed toward the national mall.

What should happen is expulsion of students making demands. That wuld be an important life lesson for them.

What a bunch of snowflake cow pies. The super offended oversensitive butt head all candidates for frontal lobotomy.

Who feels safe and welcome with the enemies of freedom?

When the President of the University NAACP says, “basically when a professor says or does something offensive, they need to leave”, I wonder; who will decide what’s offensive?