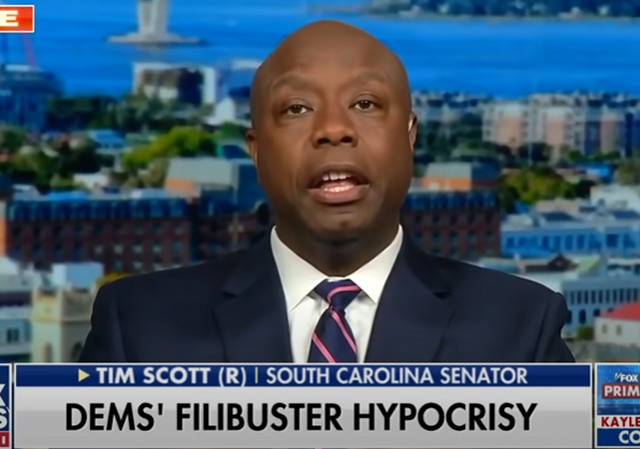 Democrats are on a mission to abolish the filibuster, which they see as an obstacle to unfettered power. In their effort to turn the public against the filibuster, they are suddenly calling it racist and a relic of the Jim Crow past.

If that’s true, why did they use it against Senator Tim Scott’s police reform bill just last spring?

Doesn’t this pretty much destroy their narrative?

Scott appeared on FOX News on Friday night to discuss what happened.

Tim Scott blasts Biden, Democrats for filibuster flip-flop: They cry ‘racist whenever they want to scare you’

Scott told host Brian Kilmeade it was both “frustrating and irritating” to see Democrats use the filibuster last year to block a police reform bill he proposed and claimed would have disproportionately helped the Black community.

Scott added that Democrats “use the word ‘racist’ whenever they are trying to scare people into their corner. It has nothing to do with race. But they don’t care. Winning at all costs means losing at some point.”

Senator Scott has also made his thoughts known on Twitter.

The Democrats’ assault on the filibuster is wrong.

It's the perfect example of the “woke Left” shutting down any debate to push through their radical agenda.

A system too fragile to entertain divergent points of view is doomed to fail.

President Obama & President Biden both vigorously defended the filibuster in 2005. The reason for Democrats’ change of heart is painfully transparent: Silencing the voice of the minority is the only way they can pass their radical agenda. https://t.co/HimYXfft3Z

After @POTUS @JoeBiden denounced the rampant abuse of the filibuster last year, we did some digging. Republicans used it once. Democrats used it 327 times. @FoxNews

The Democrats’ new disdain for the filibuster has nothing to do with racism.

It’s all about power.

Spot on Senator Scott! 327 times last year the Democrats were racist according to their very own words!!

Proves the old adage “Slayed by the jawbone of an ass!!”

Senator Scott needs to remind them of the time the Democrats call a piece of legislation he wrote a “token” attempt and referred to him as “Uncle Tom”.
There is nothing more racist in our life as a “woke” leftist.

Funny how everything now hinges on race.
Gosh, 50 years of progress have been erased in such a short time thanks to woke, enlightened leftists.
I expect a powerful black figure to become vocal about the insanity, but they will be “Cosby” cancelled as soon as it happens

How much of that progress is, or was, real, and how much of it was for appearances?

I think a lot of it was real. I am in my mid-thirties now. I grew up in a large school system (in a tiny town, oddly) where students were pretty well intermixed.

Maybe I was just oblivious, but I had several black friends and it never occurred to me to think their blackness mattered. They didn’t seem to think my whiteness mattered. That combination seemed fairly widespread in my youth.

Teenagers I have taught seem to be very race-conscious and vocal about it. We have de facto segregation now. I’ve even seen black parents pull their extremely bright kids from the honors classes because those classes were mostly white.

People in my age group grew up without considering race. We definitely have learned to consider it. That feels backwards.

There has been progress in actual America. Democrats and the media (but I repeat myself) have been driven to INGSOC levels of gaslighting to cover it up.

I looked up INGSOC, it was the ruling party in Orwell’s “1984”. I read it many years ago but forgot.

“After @POTUS @JoeBiden denounced the rampant abuse of the filibuster last year, we did some digging. Republicans used it once. Democrats used it 327 times.”

You know that the Joseph Goebbels media will label that as “mostly false” or “lacking context” or some other Orwellian dodge.

They do what gives Democrats power.

When they were in the minority the filibuster gave them power. Now it takes away from their power, so they want it gone.

They think they can cheat themselves into office so they will never lose power again.

They think they’re at the point where they don’t have to care anymore.

And on the off chance that they somehow lose power? They think that the weak-kneed surrender monkey RINOs will put it back in place if they ever happen to lose the majority.