Independent Sen. Angus King (ME) caucuses with the Democrats, but broke away to vote no on the amendment. 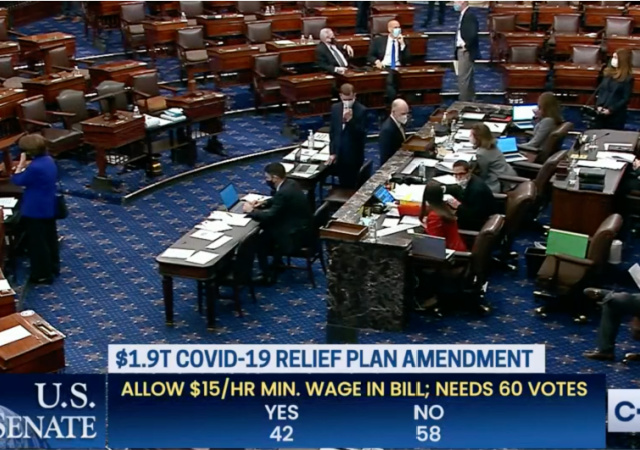 Sen. Bernie Sanders’ (I-VT) $15 minimum wage amendment to the COVID-19 relief bill failed after seven Democrats, and one independent voted against it.

Those who voted against it are:

All Republicans voted no, including moderates Sens. Lisa Murkowski (AK) and Susan Collins (ME).

Manchin and Sinema are not surprising because they made it known they would not vote for the minimum wage hike. This piece will be updated once those who voted no explain their votes. Sinema released her statement:

The minimum wage amendment did not make it into the COVID-19 Relief bill because Senate Parliamentarian Elizabeth MacDonough ruled it out under budget reconciliation.

Reconciliation allows the Senate to push through budget legislation and prevent usage of the filibuster. But the Byrd Rule, named after Sen. Robert Byrd, can stop that from happening. It “allows senators to block provisions of reconciliation bills that are ‘extraneous’ to reconciliation’s basic purpose of implementing budget changes.”

The Democrats and Republicans argued their cases, but MacDonough stuck to her original decision.

If the bill contained the minimum wage language, it would have to pass with 60 votes.

Sanders has already vowed to keep fighting for the amendment:

“Federal minimum wage, which has not been raised since 2007 by Congress is a starvation wage. $7.25 an hour. If anybody thinks that we’re giving up on this issue, they are sorely mistaken,” Sanders said.

When asked if he was surprised by the number of Democrats who voted against it, Sanders said, “no, we knew exactly what was happening.”

White House Press Secretary Jen Psaki told the press that the White House is not involved in the conversations:

“We agree with Senator Sanders and the President is going to be standing right alongside him fighting for an increase in the minimum wage to $15 an hour because men and women who are working hard to make ends meet shouldn’t be living at the poverty level and he will use his political capital to get that done,” Psaki said at a White House briefing.

Psaki said: “The President his team are not engaged in conversations or negotiations about lowering the threshold for the minimum wage, just to be crystal clear on that.”

The can’t just share/shift responsibility. The issue is progressive prices, not costs, where the former is forced with single/central/monopolistic motives and regulatory excess.

The minimu wage is and will always be $0. Bernie just wants more people making the true minimum.

“starvation wage. $7.25 an hour. If anybody thinks that we’re giving up on this issue, they are sorely mistaken,” Sanders said.”

If the $15 minimum wage was passed, there would have been lots more people making zero.

Anyone who is reliable and actually works would receive raises in short order.

What raising the minimum wage will do is take away entry level positions, preventing many people from even getting a chance to prove themselves.

My experience hiring people is that it takes weeks, sometime months to train them and figure out if they are worth retaining. decades of employing people there have been many that just did not work out, wasting my time, other employees time, and often costing me thousands and even tens of thousands of dollars.

Bernie is just trying to increase business overhead to benefit people who are duds.

Well, he identifies with the duds, his fellow tribesmen.

That’s just not true for most employers, especially larger employers. It’s normally a set wage based on grade/employment type

As far as I’m concerned, they can bring it up as much as they want. I’d just prefer they do it in a standalone bill rather than trying to sneak it in on other stuff.

Agree…and any chance I get to expound on our experience in our business, I will take. We are in a small town in rural Georgia with a retail business.
Our part time high schoolers start at 8.50. Right now, we have a senior girl who is making $9.50. She has no rent or car payments. Our assistant manager (29 yr old) is married, just bought his first home (his wife is a teacher). He makes under $15/hr with some benefits and bonuses. He has been with us for 3 years…You don’t need to make $15//hr to live in many parts of the country. Our employees get raises every year and Christmas bonuses and we have a fun working environment. This is why politicians do not need to tell business owners how to run their businesses. We don’t need their advice.

Big words for an old trog who paid his own campaign staff those very starvation wages.

Where in the Constitution does it give the Federal Government, or ANY Government, for that matter, the right to dictate how much I can sell my time for?

Call my a cynic, but I think this is the Communist Party’s version of Failure Theater. Only in this case the Communists intend to blame Republicans and “greedy businesses” for the crash-and-burn of one of their Sacred Issues.

The Communists in Congress have been voting in lockstep for ages – but suddenly eight of them defect to the side of the dastardly RethugiKKKans? On a minimum wage bill? Pu-leeze!! Congressional Communists don’t go to the can to take a dump without getting permission from the Pelosi/Schumer Revolutionary Watch Committee.

They realized that if they let the amendment pass, their entire bill would fail because it would raise the vote threshold for passage.

“… men and women who are working hard to make ends meet shouldn’t be living at the poverty level and he will use his political capital to get that done,” said Presstitute Sexitary Jen Psak of Shït.

But I guess it’s OK for Xiden to force 70,000 workers into poverty within the first week of his p Residency.

Bernie has never had a real job, nor ever paid anyone a wage. He’s just a Communist crackpot.

A venerated, esteemed Communist crackpot. The Grand Vizier of the Democratic Party.

Socialists are always so generous with the time and money of others. Never their own.